Share All sharing options for: Russell Hansbrough will be the bell cow of the Missouri offense in 2015

Jack Peglow: FEED. HIM. Please feed this man as many carries as he can stomach. Don’t make things more complicated than they need to be, Josh Henson. Just give Hansbrough the ball and watch him work his magic.

After rushing for just over 1,000 yards last season, Russell is primed for a big 2015 as the clear-cut, workhorse running back in Missouri’s offense. He should make up a hefty majority of the running game, which will give him a chance to rack up some major yardage. The Trib's David Morrison said earlier this summer that Hansbrough had a legitimate shot at receiving the most carries in a season since Devin West ran the ball 283 times for 1,578 yards in 1998, and I agree. Unless one of the new (ish (HA!)) guys makes a big splash, we may all bear witness to a special season for our shifty little bowling ball of a running back.

The Beef: While I agree with the notion of getting Russell the ball early and often, I don’t think we see him get carries quite to the Devin West level of 1998. What I would like to see is an expansion of the targets to further provide him with chances to get the ball in space (where his shiftiness could be on display) and increase his overall touches. Give me 1,200 yards and 12 TD’s rushing and 150-200 yards and a couple of TD’s receiving, and I would be thrilled.

switzy227: If you know me, you know I’m head over heels for this dude. I want the ball in his hands all the time. I want him to break intergalactic records. I want him to scamper for an 80-yard touchdown and then Tecmo Bowl his way back toward the other end zone just for kicks. I want him to go out with a legendary year. He’s got the skill and the opportunity -- let’s just hope it all works out.

Kacc56: Hansbrough has the talent and he has the opportunity to get a lot of carries, so he should be in for a big year. This offense needs someone to move the chains consistently, and that should be Hansbrough. He's explosive and tough and can hopefully carry a big load this year. 250 carries or more would be ideal.

jaeger: If Hansbrough works on his decisiveness and stays healthy, he’ll have a monster year. Here’s hoping.

Fullback U.: A prototypical Mizzou running back listed favorably at 5’9 and elected a captain this year by his teammates, Russell Hansbrough has earned the nickname "Muscle Mansbrough." His 1,000-yard rushing season saw him providing explosive breakaway touchdown runs, but he’s also demonstrated his toughness, battling for yards and all but refusing to go down behind the line of scrimmage. Mizzou’s offense will go through a healthy Hansbrough running behind a senior-laden offensive line so another 1,000 yard season is almost expected.

That said, I can see a situation where Hansbrough’s carries are limited, particularly in the early portion of the season in order to save his legs for conference play. He has big-play ability ("bigplayability" should absolutely be a word) as we saw again Minnesota, Texas A&M, and Indiana. If his backups can be effective, I believe he can be explosive.

Bill C.: The key for Hansbrough is getting past the line. His efficiency numbers have been hurt by his tendency to dance in the backfield if his original plan of action is thwarted. That results in quite a few negative carries. As I wrote in my SBN Mizzou preview:

Hansbrough could get caught dancing in the backfield. Among the 45 FBS running backs with at least 200 carries, he ranked 13th in highlight yards per opportunity (explosiveness), but he was 33rd in opportunity rate (percentage of carries gaining at least five yards). And one iffy carry would beget another one. In 14 games last season, he averaged 4.3 or fewer yards per carry five times and 6.3 or more four times.

Mizzou will be relying on the run game to keep things as easy as possible for the young receiving corps. Second-and-12 isn't easy. The ability to understand when a play is lost and minimize damage is the last step in Hansbrough's development, and it could be a big one. 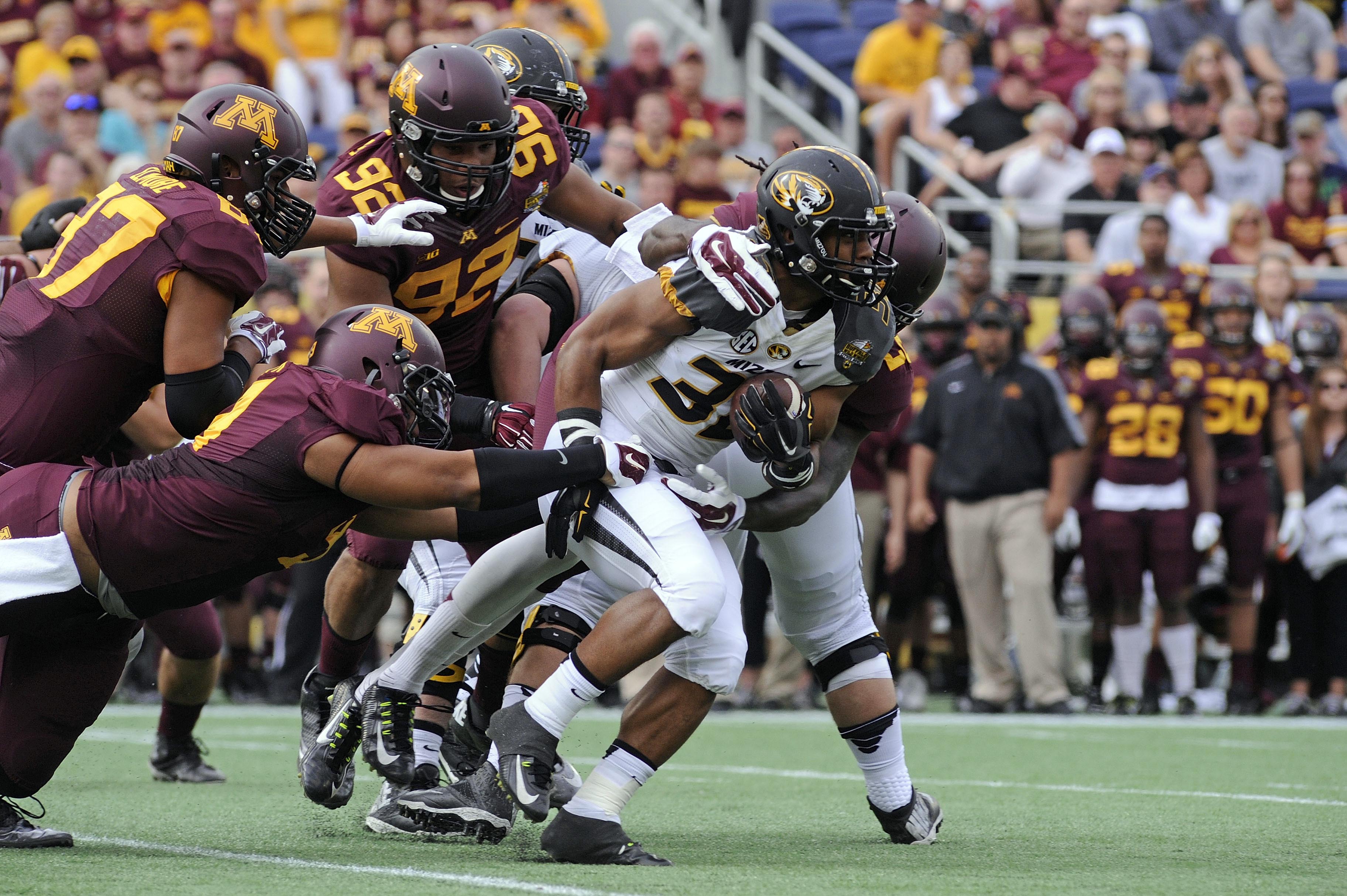