Share All sharing options for: Missouri might be a more extreme version of last year's "great defense, timely offense" squad

His line only sometimes chose to block for him. His receivers dropped at least six passes. He threw his requisite pair of "WTF WAS THAT, MATY??" passes, both of which were picked. Maty Mauk's awful passing line -- 16-for-36, 148 yards, 3 TD, 2 INT -- was well-earned, if not completely by him.

And when it was time to seize the game, Mauk went 5-for-7 for 70 yards and two scores. He delivered a beautiful ball to Wesley Leftwich, who responded with a beautiful catch and a 32-yard TD that tied the game. He escaped pressure and dumped the ball off at the last second to Sean Culkin, who ran faster than I've ever seen him for a 21-yard go-ahead score. Mauk also rushed seven times for 54 yards in the second half, helping to flip the field on multiple occasions and turning around a field position battle that was drastically skewed in ASU's favor in the first half.

Mizzou's offense needs serious help right now. The running backs are exploding Spinal Tap drummers, the receivers probably will look awful and inexperienced a few more times (as they did last night), and the line stinks. (It stinks in a way that, like last year, suggests it could gel and improve when healthy and given more reps, but it still stinks right now.)

But while Week 2 was an upset- or near-upset-fest from coast to coast, Mizzou avoided one because the offense made a few key plays and, more importantly, gave the defense just enough rest in the second half for the D to dominate. That's better than the alternative, at least.

This might end up being a more extreme version of last year -- the offense might be even worse, and the defense might end up even better. Those are lofty words that I might end up regretting, but against an offense that nearly ranked in my S&P+ top 50 last year, Mizzou allowed just 2.9 yards per play and gave Arkansas State no second-half hope of moving the football.

Mizzou just honed in. ASU averaged 4.5 yards per play in the first quarter, 3.5 in the second, 0.0 in the third, and 2.6 in the fourth. Even the Red Wolves' 17-point second quarter was prompted mostly by amazing field position, a couple of tight third-down conversions, and a couple of wonderful catches by Tres Houston. ASU's average starting field position in the second quarter was Mizzou's 48 thanks to two interceptions and a nice kick return. (Man, I'm so glad to be done with J.D. McKissic.) But the Tigers had answers for everything in the second half, with Barry Odom ratcheting up the pressure and the front seven playing absurdly good football.

Mizzou finished with 15 tackles for loss and six passes defensed in 75 snaps -- a 28% havoc rate that would have led the nation last year. Kentrell Brothers managed to steal both passes and story lines with the way he played in the second half (he finished with 10 solo tackles, 6 assists, 1.5 TFLs, and 2 INTs), and he might have only been the second-best player on the field; Charles Harris (5.5 tackles, 4.5 TFLs, 2 sacks, 2 hurries) might have been even better. Marcell Frazier 2.5 tackles, 1.5 TFLs) had a couple of "hello, world" moments, Terry Beckner and Josh Augusta both destroyed the interior of the line a few times, and Michael Scherer (8.0 tackles, 3 TFLs) was as aggressive and effective as I've seen him.

Oh yeah, and the secondary sucked the life out of a happy receiving corps in the second half.

I don't want to oversell ASU's offense, but it has speed and talent, and it came out of the gates aggressive and confident. Mizzou leeched that confidence away in the second half. 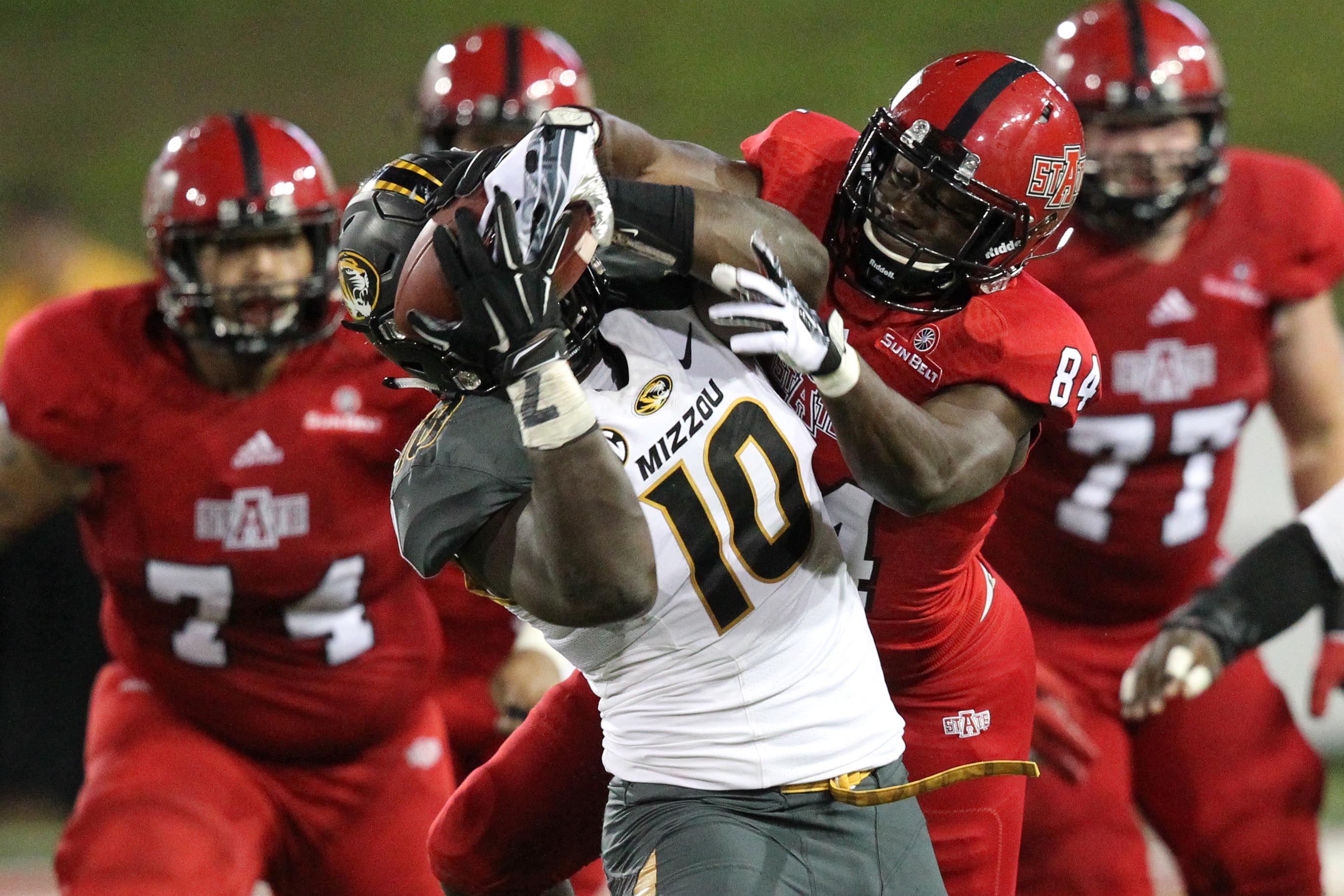 I loved the adjustments Josh Henson made throughout the course of the game. He used Ray Wingo on a jet sweep "pass" in the first half, then faked it to maybe wrong-foot defenders and get Ish Witter (in the game because Russell Hansbrough clearly couldn't do much) a step on defenders. He called a couple of longer pitches to Witter to try to get him more to the corner without Ish having to navigate through traffic, which he still clearly struggles to do. Between nice tweaks and better blocking, Witter had himself a nice second half.

Seven intended touches (carries and targets) in the first half netted just six piddly yards. (His best first half contribution: a tackle on Bo Sentimore after a 45-yard interception return.) Seven in the third quarter gained 52.

And then he suffered a potential concussion getting pushed out of bounds on a third-down run.

So if you're keeping score at home: Russell Hansbrough could only manage five carries because of last week's bad ankle sprain. Witter is concussed. Tyler Hunt is still suffering the effects of an August groin injury, limped off the field at one point, and had just two carries for four yards. And Mizzou finished the game handing twice to Morgan Steward, he of the long-term hip issue, for zero yards. And Trevon Walter is still working back from his spring knee injury. That leaves Chase Abbington (who clearly isn't ready yet), and ... ?

It isn't in Gary Pinkel's nature to freak out and make extreme short-term decisions. Once they've decided which freshmen are going to play, that's that. But you have to be wondering what he, Josh Henson, and running backs coach Brian Jones are talking about this morning.

One assumes Hansbrough will be in a boot for much of the week and that Witter won't be seeing the field for at least a few days. If Hunt also needs more rest, that results in quite a few reps for Abbington ... and Marquise Doherty? You have to at least consider it, right?

Doherty looked strong in scrimmages, and while we were all fine with redshirting him when it looked like depth was fantastic, depth is a shambles now. The only other running backs listed on the roster are Ryan Williams (who appeared to be behind Doherty in fall camp) and junior walk-on Andrew Stevens,pride of Eureka high school.

This has become an extreme what we already expected: a young team scuffles by early, young pieces click into place, and the team improves late. Mizzou survived on Saturday and should do the same next week against UConn, which appears to be a little better than I anticipated, but only a little.

If the line can gel a little more quickly than it did last year (it took about six games last year), running backs stop exploding, and the receiving corps finds some growth after yesterday's debacle -- J'Mon Moore (9 targets, 2 catches, 17 yards, and an impressive blown-block, illegal-block combo on one play) and Nate Brown (7 targets, 4 catches, 46 yards, a dropped touchdown, and a bad hold on the play that resulted in Witter's concussion) -- then there's time to still get somewhere. But for now, Missouri is a team with a potentially incredible defense and an offense that is once again relying on making key plays while serving as a hindrance for much of the game.

This makes sense, of course. With Hansbrough hurt, that means that Mizzou has, over the last two offseasons, lost six starting receivers, two starting running backs (and a key backup in Marcus Murphy), and two NFL starters on the line. The double-dipping in the turnover department made Mizzou thin on offense, and Hansbrough's injury has wreaked havoc.

It is what it is, I guess. Just worry about winning right now and maybe hope to actually look good later on.