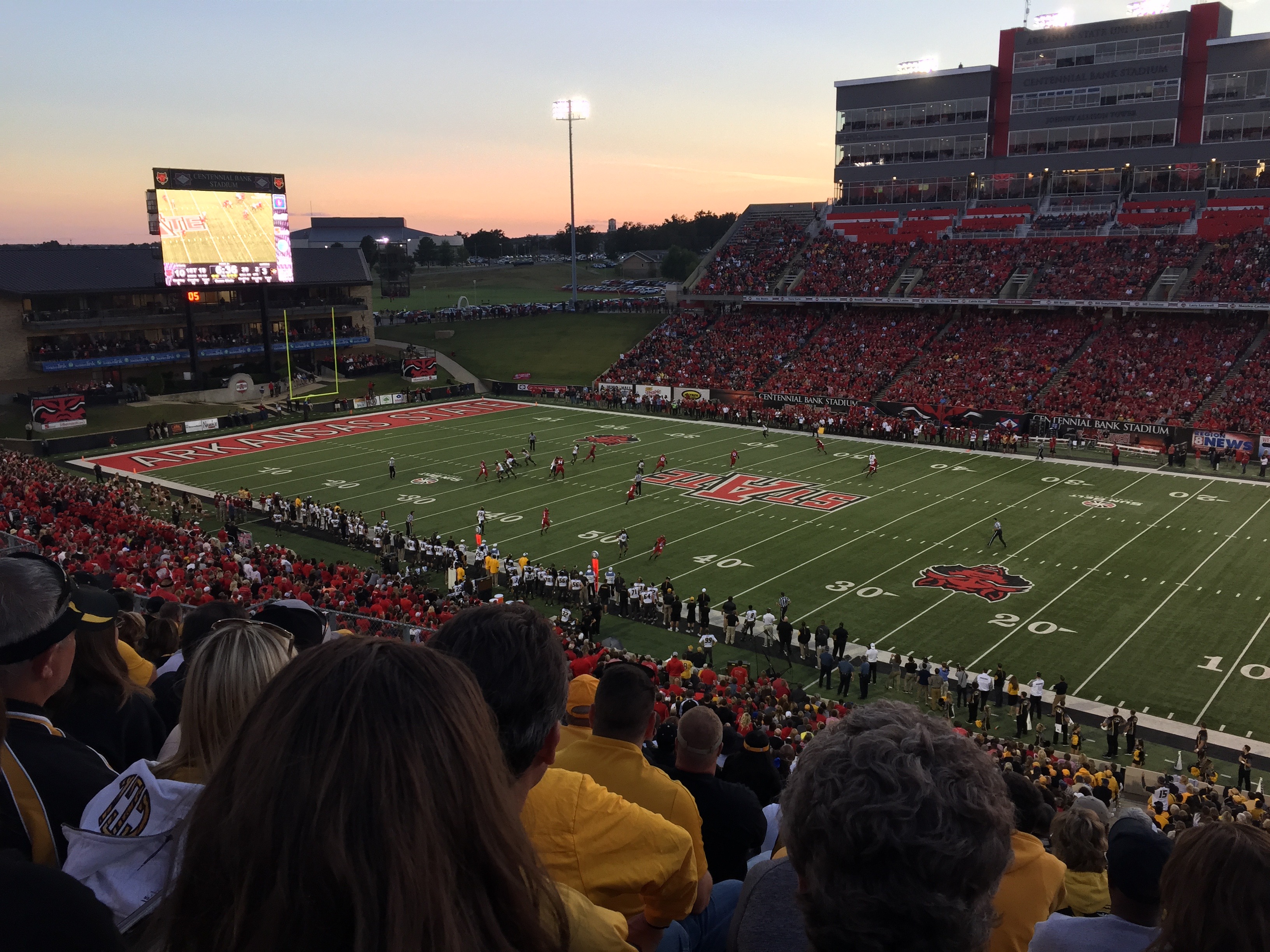 What We Saw from the Cheap Seats

Well, it was bound to happen, but my ramblings outran the comments. In this particular case, my dad, stepmom, wife and I made the trip to lovely Jonesboro, Arkansas. Anyway, down to business...

The play-calling early this season has befuddled me as much as the play-calling early last season. In 2013, with an injured quarterback, Henson routinely left a TE and/or a RB in to help with pass blocking and give Franklin plenty of time and a clean pocket. Early last year, and so far this year, he seems to have a preference for going 4 wide, with only an RB on a delayed release to help the OL. I'm not sure that's going to work with this OL. Speaking of which...

The OL is capable of getting a push. They showed as much on the first run of the second drive, where they managed to move the line of scrimmage back to get the team out from under their own uprights. I think, as Boehm gets healthy, and the line finds its chemistry, the run game will improve. I'm more concerned about passing. If McGovern is the best option at left tackle, I have serious concerns about pass protection once we get into conference play and we start seeing elite pass rushers.

How spoiled were we in 2013 to have Josey, Hansbrough, and Murphy, with a healthy Steward stuck behind them, or even just to have Hansbrough and Murphy in 2014? Not just the talent, but the depth of talent? With Hansbrough injured, the options shrink to only-slightly-less-injured Witter, Hunt, and Steward.

Witter reminds me of a young Murphy, or, perhaps more accurately, a young Kendial Lawrence: he doesn't lack for speed, but he hasn't shown the patience to set up his blocks, the vision to see where the hole is going to be, the sudden acceleration to explode through the hole, or the moves to make someone miss in space. The end results is a running back that looks lost if there's no hole and he can't win a footrace to the edge. That's good enough for running the speed option, but not much else.

Hunt is a different animal. Everyone loves to root for the walk-on that works his way into playing time (what's good, Max?), but he has all the same deficiencies as Witter and none of his speed. He makes up for this, to some degree, with a willingness (or perhaps insistence) on lowering his head and hitting the point of attack at full speed, whether there's a hole there or not.

And so we have an injured star, and two hobbled back-ups with limited patience, vision, and agility, one of who insists on a footrace to the edge, the other on pushing the pile. What I wouldn't give for Henry Josey, running ¾ speed to the line as his blocks take effect, before exploding through the crease, stepping out of a tackle and accelerating into the open field...

I was happy to see Culkin getting targeted and making catches, but the dizzying array of places he lines up and ways he blocks probably doesn't get nearly enough credit. Lined up as an H-back, on a play-action pass, out of the pistol, he ran across the formation to fake a trap before releasing into the flat on a route, which is an awful lot to keep track of. He and Reese probably have to have a more complete knowledge of the playbook to run Henson's offense than anyone beside the quarterbacks. On the other hand, the very presence of Echard in the game should be enough to tell the defense it's a run.

I was a little unhappy to see that Moore has contracted Culkin's case of the drops. He got yanked after his two most egregious drops, although I'm not sure if it was because of the drops. I have no idea how to fix that, other than time and practice, which is rapidly running out, now that Kentucky looks like less of a gimme.

Maty's legs giveth, and his decision-making (and receivers) taketh away. He wings interceptions when there's no receiver in the area, and he throws to wide-open receivers who drop easy catches. The only thing I really noticed that may have confused the reads is that ASU would consistently line up in a Cover 2 shell, then shift into Cover 1 (or maybe Cover 1 Robber) on 3rd and long. On one hand, I'm kind of surprised they didn't play more of this, since even when our receivers beat man coverage, they didn't consistently haul in passes anyway, on the other, this is one of the reason's Mauk's draws were so successful, because the defender's had their backs turns playing man coverage. I really liked his TD pass to Culkin; it had everything; he forced the defense to respect his running ability, he kept his eyes downfield, he threw it to the guy that's supposed to be his safety blanket, and the guy actually caught it and ran like his ample hair was on fire.

Lock isn't there yet, and I think his interception shows why. Lock may be a more polished pure passer, but Mauk is a more complete quarterback. He knows the playbook better, he recognizes coverage better, and he can make things happen with his legs.

I didn't see anything against Arky St. that I don't think we already saw against SEMO. I distinctly noticed us forcing them to call a time-out by showing corner blitz with the safety walking down behind it. This shows a certain willingness to mark up and play man, which directly led to...

Rewatching both touchdowns, I initially wasn't sure it wasn't the same video twice:

It's hard to blame the DBs for being out of position to play the ball when they're in man coverage, since they're turned around watching the receiver rather than the QB as they would be in zone, but when you're singled up on a single receiver, opposite the trips, backed up to the goal line, letting the WR get far enough behind you to have room to catch the ball is hard to excuse. Granted, in both cases the ball was well thrown, and Houston is clearly an excellent receiver (can we trade for him?), but it's one more thing that doesn't bode well for conference play.

Kentrell is something, isn't he? But perhaps lost in the shadow of his individual accomplishments is that Scherer has also been very good, and Green/Newsom are playing more downs than they would have last season, and the pass defense hasn't shown any drop-off.

The 1st and 2nd halves looked like night and day for the defensive ends. For 3 halves, the defensive ends were charging into the backfield with reckless abandon, and with startling regularity, the ball was going outside of them. It's day one of practice stuff to coach the DEs to sit down and let the ball come to them, but in the second half of the ASU game, they actually did it, and low and behold, the ball DID come to them. (This is one thing that scared me about reading the xandolabs piece the FBU posted about "stop the run on the way to the passer" as compared to the more traditional "block down, step down" 1-gap technique: being disruptive and getting into the backfield is great, but a good team has a million ways to take advantage of that.)

Perhaps equally important, we appeared to be rushing 3 and spying 1 against Knighten to keep him from running, but once Tabary was in the game, we pinned our ears back and rushed 4, which made an obvious difference.

After we snuffed out the first screen, I was suitably impressed with the improvement of our screen defense... then they threw a slip-screen to McKissic that everyone in the stands saw coming a mile away for a big gain. Still, Odom's ability to play aggressive, attacking defense while maintaining good discipline against the screen is admirable.

...deserves it's own category. Arky St.'s 2nd effort was outstanding. They were playing like they were angry about their lose to USC and this was their Superbowl. I think it took us awhile to match their enthusiasm.

Penton is scary as a punt returner. He just doesn't look like he secures the ball quickly, or is decisive in choosing to return or fair catch. I'd be interested to see what Witter or Wingo could do in that roll, but there's almost certainly a reason we haven't seen that already.

Jonesboro is a nice little town; it reminded me of Rolla.

We had several ASU fans, who were unfailingly friendly, polite, and welcoming, tell us that this was the most visiting fans they had every seen. The lady at the desk at our hotel said that every hotel in town was full.

ASU has a pretty nice stadium and gameday experience. After the first two interceptions, they played the "That just happened!" clip from Talladega Nights and the "That was awesome!" clip from Tommy Boy. We should steal that. I was particularly proud that when ASU trotted out their various donors, the Mizzou fans were clapping as loudly as anyone.

Arky St. had a flag bro on the flag squad. He was not small, and had a full beard. No judgment. Follow your dreams, flag bro.

Sunday morning, we hit up Chef's In for breakfast. I had the 3 Egg Breakfast, scrambled, with sausage and biscuits and gravy. In retrospect, I should have gone with fried eggs, bacon, and fried potatoes. The biscuits were just about perfect, and I should have just had them with butter. The gravy was okay, but it lacked for sausage, and still had a raw flour taste. BST would have been disappointed, but for a southern breakfast, I give it a solid 3 stars with room to be coached up. 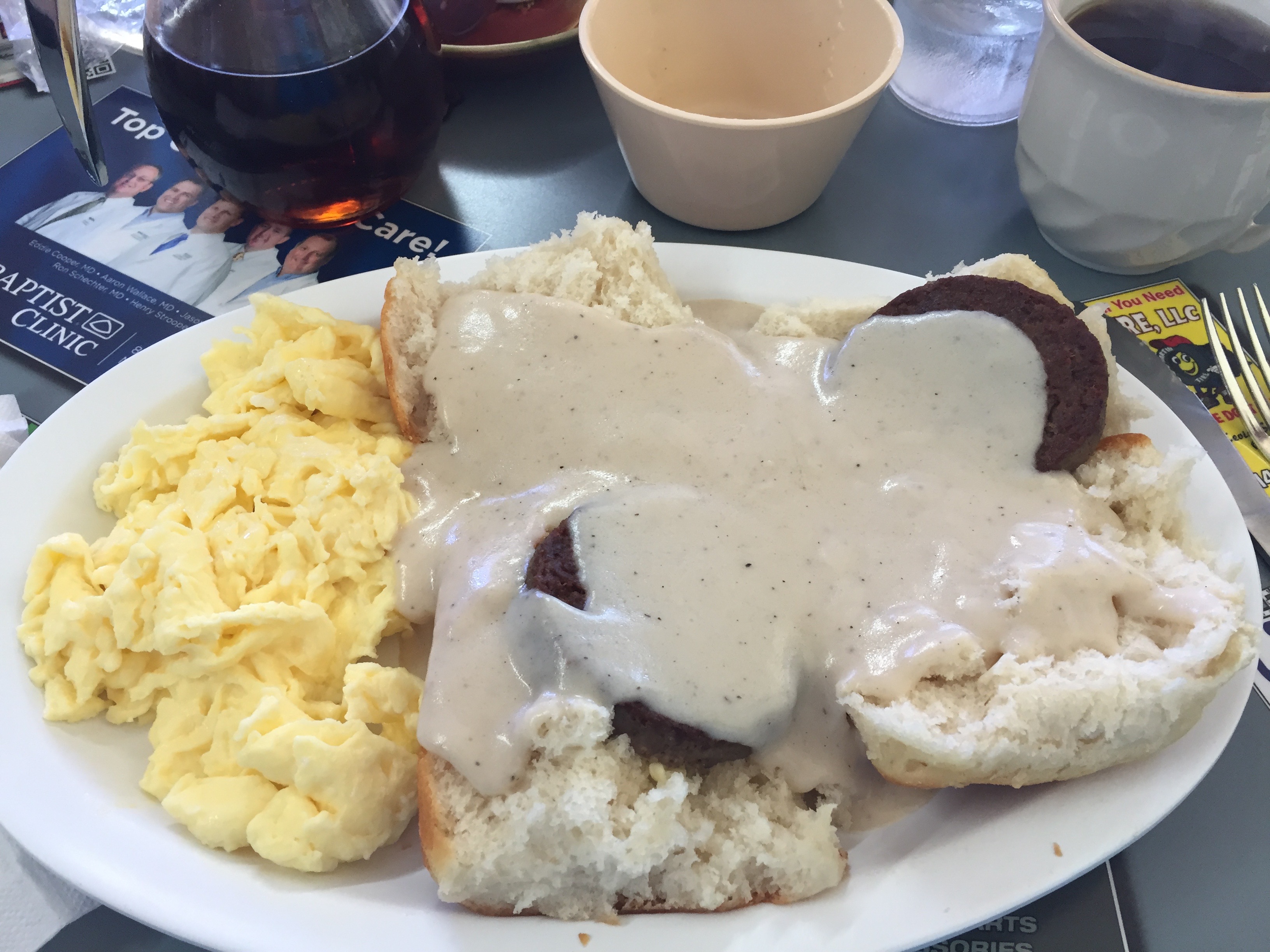 BST is not impressed