Share All sharing options for: Missouri's defensive play-makers should be too much for UConn to handle

It's too early in the season to derive much from rankings or opponent-adjusted stats, so for today's BTBS session, let's simply take a dive into each of UConn's first two games and see what we can learn. The Huskies are 2-0 with wins over FCS heavyweight Villanova and Army. Simply beating Villanova by any margin is semi-impressive, but the Army game shouldn't have been as close as it was. 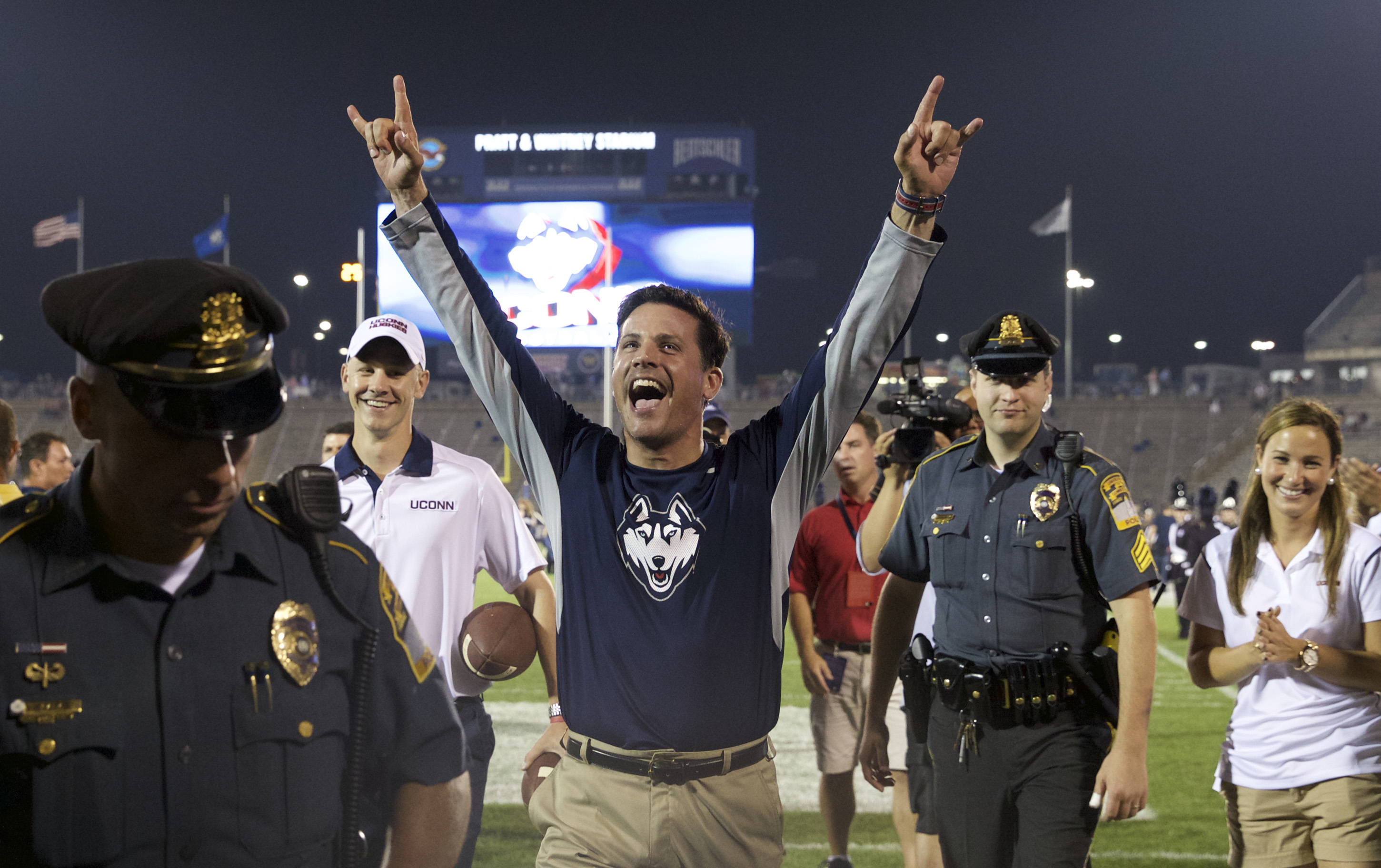 UConn did a really nice job of staying on schedule. The Mizzou defense has more to offer up front than Villanova, but the Huskies were able to mix run and pass and engineered an awesome 57% success rate on standard downs. Things completely fell apart on passing downs, but this is how you move the ball with a young, mobile quarterback like Bryant Shirreffs. You give him opportunities to both run and pass (though, yes, UConn's been mostly run-heavy) and you force defenses to mind a lot of weapons. And when you get a scoring chance, you take full advantage.

That UConn does much of this from two-tight-end looks is pretty unique.

The ground game is all about efficiency. A 47 percent rushing success rate is good! But there was nothing even close to a big gainer on the ground.

There were a couple of big strikes in the passing game -- Shirreffs to good-looking tight end Tommy Myers for 69 yards off of play-action and Shirreffs to running back Arkeel Newsome for 27 on a third-and-13 screen -- but this simply isn't an offense designed around big plays. The weapons aren't there yet.

Again, if you don't have a big weapon, use everybody. Here's the pass distribution for Shirreffs in this game:

4. The defense had breakdowns on the play-maker downs. Standard downs are about the game plan; passing downs are about the play-makers. UConn was able to keep Payton Award winner Jon Robertson in check for much of the game, but the Wildcats found success in digging themselves out of holes. In fact, their success rate was actually HIGHER on passing downs than standard downs. It's not supposed to work that way.

Robertson is a more proven quarterback than Maty Mauk, honestly, but Mauk has shown some play-making prowess at times, going deep or extending plays outside of the pocket. This tends to bring out his best AND worst moments, but as long as there's more former than latter, he might have a chance to make some plays.

5. UConn got after Robertson. The Huskies had only 13 sacks in 2014 but sacked Robertson four times in only 36 pass attempts. Tackle Foley Fatukasi, who had only three tackles for loss last season, had two sacks, and fellow sophomore Luke Carrezola had one. Development seems to be kicking in a bit up front. 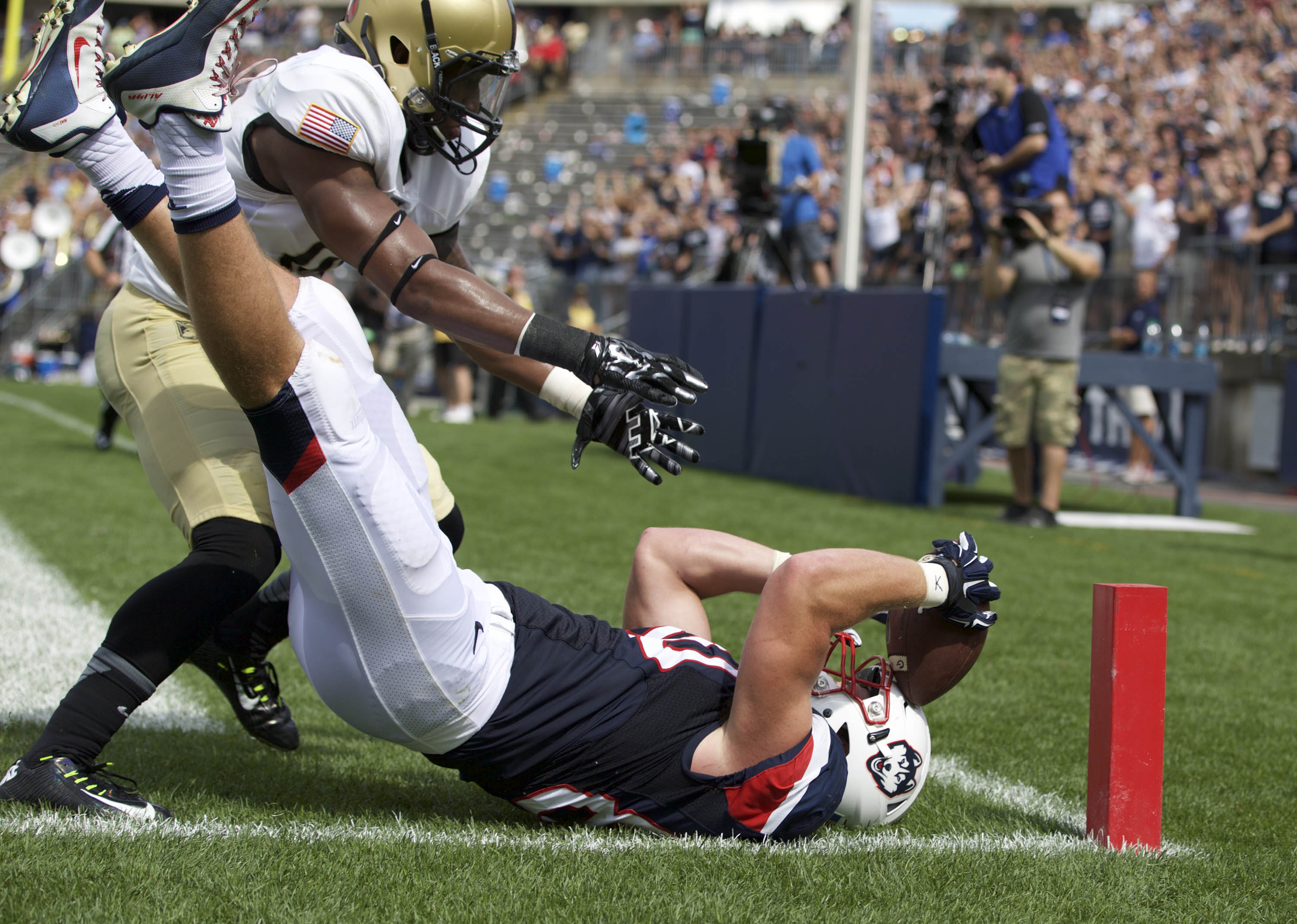 Against a more inferior opponent (and yeah, Army is almost certainly inferior to 'Nova), UConn was more volatile. The Huskies were still efficient on offense, but there were more big plays (three different players had a 30-yard catch) and more blown chances.

UConn created seven scoring opportunities in only 10 possessions, which should have resulted in about 34 points but instead ended in only 22; the Huskies settled for three field goals and punted once after getting a first down at the 37. Mizzou's got its issues but still very much qualifies as a superior opponent, and UConn has to finish opportunities in the end zone.

Pretty poor offensive line stats here. Against Army's tiny (relatively speaking) defensive front, the Huskies were able to only average 2.75 line yards per carry (it was 2.17 against 'Nova) and gave up three sacks in 28 pass attempts. To say the least, Charles Harris, Marcell Frazier, and company could have some opportunities to get after Shirreffs, especially if the run blocking hasn't improved.

An unimpressive start for the defense. Army got the ball near midfield on its first possession because of a Shirreffs fumble, and drove 29 yards for a field goal. Then, on the third possession, the Black Knights drove 90 yards in five plays and scored on a 56-yard run by quarterback Ahmad Bradshaw. Because of the crazy-slow pace and UConn's ability to play keep-away, these were Army's only three possessions in the first 25 minutes of the game, but this success allowed Army to stay within 12-10 at halftime.

Mizzou's probably not going to break out the triple option, but both Bradshaw and Villanova's Robertson had success running the ball. Robertson's success (85 yards on 14 non-sack carries) means more because Army's offense is so specialized, but it does hint at what we were already assuming: Mauk's going to be rushing the ball quite a bit in this game, either very the super-effective (so far) QB draw or the zone read.

Keys to the game

Mizzou's defense can likely get pretty aggressive in this one. UConn's offense is based primarily on efficiency, runs between the tackles, and passes to the sideline. The Huskies have proven they can play efficient, time-consuming ball if you let them, but there's nothing saying Mizzou has to let them. If the Tigers make some plays in the backfield and force UConn into passing downs, the Huskies don't have much hope. If they're able to consistently carve out second-and-6 or third-and-2 situations, they'll stick around for a while.

Honestly, I don't have much hope for a breakout performance from Ish Witter and the guys blocking for him. Without Russell Hansbrough, and with uncertainty lingering up front (particularly at the guard positions), the standard run game isn't going to be amazingly effective, especially considering UConn's linebackers are active and feisty. That said, falling into passing downs might not be the end of the world ... at least as long as you're not doing it too much. UConn appears to be getting more aggressive on such downs, which could result in sacks but might also result in running lanes for Mauk and long passing opportunities. If Mizzou is able to pull some rabbits out of hats on second- or third-and-long, the Tigers should score more than enough points to win.

We all remember the Indiana game last year. Mizzou struggled enough early on offense to let Indiana hang around and eventually figure some things out against a Markus Golden-less Tiger defense. Offensive failures led to defensive breakdowns, and Indiana's belief picked up as the game progressed. UConn is a young team with a fiery young coach; the last thing you should offer the Huskies is belief. Start strong in the first quarter, lay the hammer down after halftime, and hope to get up on the scoreboard before some inevitable lulls take place.

Because 50% of the S&P+ ratings are still based on preseason projections, the numbers like Mizzou comfortably in this game, something to the effect of 38-10, and assigns a 95 percent win probability. But I'm not sure Mizzou's offense is ready for something like that. I'm thinking more in the neighborhood of 27-10. I don't think UConn has enough to offer offensively, especially since Mizzou's defense has enough pieces to force passing downs. But I also don't trust the Tigers' offense to get rolling against anybody in particular, especially not the best defense they have faced so far. We all want a blowout, and it's on the table, but I don't expect it. And that's fine. Style points only matter if you're a national title contender, and Mizzou's not that this year.