In Lexington, basketball season no longer starts after the first football loss

Share All sharing options for: In Lexington, basketball season no longer starts after the first football loss

Before I jump in, let's wind the clock back just a few years.

The last time Missouri football played in Lexington was 2013. The Tigers won 48-17 on the arm of Maty Mauk slinging five touchdowns, four to Dorial Green-Beckham. After one of DGB's more acrobatic catches, a picture started to circulate among Missouri fans online. It showed the faces of a few Kentucky football fans staring, slack-jawed, at a celebrating Green-Beckham as if they'd never seen a catch quite like that in their lives. The guy I interviewed for this piece is there in the middle. 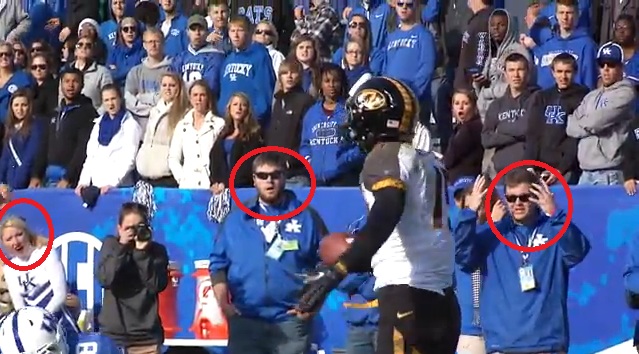 His name is Nick Ramos. He's a senior at Kentucky and is also the chairman of TEAM WILDCAT, an organization housed out of the athletic marketing department. The goal of TEAM WILDCAT is to increase student involvement in athletics by making sporting events more enjoyable for students. Basically, he's one of the lead promoters of Kentucky athletics on campus.

I thought it would be interesting, going into this weekend's game in Lexington, to talk to him about football culture at the University of Kentucky and how it has changed since he started as a freshman in 2012. He was raised St. Louis and grew up watching the glory days of Missouri football, a far cry from his experience with UK football so far.

During our chat, Nick and I talked about the ways Mark Stoops has changed football culture in Lexington, Kentucky's view of Missouri football (#DISRESPECT) and how Kentucky brands its football program to students. He also reminded me how great it is to be a Kentucky basketball fan, which was kind of a low blow, but I'm over it now.

I remember in our freshman year, you came to a Missouri game, and we met up and talked for a little while. I remember you said something to me that stuck out; I still think about it to this day. You told me, "Basketball season at Kentucky starts after the first football loss." I laughed and you said, "No, it's true." So now that you've been there for a few years, do you stick by that? Is that the way it works there?

My freshman year, I'd say yes. Now, with Mark Stoops and the changes of the environment...I would say basketball season and football season coincide with each other a lot more now than most people would think if they're not in touch with what's going on on campus. Since Stoops got here, it's been a lot more vibrant.

One of the things I thought about when you told me about this was, "Oh, I need to tell him about this past weekend at the Florida game." Now, granted, we lost. It was a terrible feeling. But the atmosphere there...if you had blindfolded me and told me I was going to a football game, I couldn't have guessed where I was. I could have guessed Alabama, I could have guessed Mizzou, I could have guessed any other SEC school. Because the atmosphere there was crazy. That crowd was exploding from the get-go, even three or four hours before when I got to the stadium, it was nuts. There is the group of people that thinks, "Oh Kentucky lost last week, time to look forward to October 16 when Big Blue Madness starts!" But I think the majority of people now are holding out hope; that we can worry about basketball in about a month or so.

So there's definitely more of a positive view of the football program now than a few years ago.

A huge difference. During my freshman year, there was a Vandy game where I was one of 50 people in the student section. The atmosphere has just changed so much under Mark Stoops. I think people are realizing that we might not be the best team in the SEC anytime soon, but we can actually make a name for ourselves and not just be a basketball school.

What specifically has Stoops' regime done to turn the football culture around at Kentucky?

You know what it's like with basketball season when a big-time recruit comes in. [Writer's note: No, Nick, we don't know what that's like.] There's a big buzz about who they are and everything they can do. And I kind of feel like he (Stoops) has brought some of that buzz in with our football recruits. Every time we get a recruit, he's got this great thing that he's been saying and the whole regime has been saying: Yahtzee! We got a Yahtzee! We got a recruit!

He feels more like a person that is one of us. He's not just some figurehead. I like to say he lays hands on people, almost. He makes football feel like we might have a few trip-ups, but trust me, we'll get there some day. We put a lot of faith in him. This is gonna sound really weird, but he's almost like a mini version of John Calipari. The way he's changing the culture is like having another Calipari on campus.

You mentioned the Yahtzee slogan. How does the football program promote itself, this year specifically?

A lot of major sports teams have been using the phrase "All In": the hashtag and all that. That's one of the ways they've branded themselves this year. Like, "Last year we were just making a name for ourselves, but this year we want everyone to be all in: the players, the coaches, the fans. We want everyone to be as all in as you are for basketball. We're starting to make the change, now we want you guys (the fans) to start committing."

You mentioned how great the atmosphere was last week against Florida. Talk a little bit more about how the atmosphere at Kentucky games has changed over the past few years. Have any specific games stood out? What has the transition been like from when you were a freshman to now, when the fans can get hyped up for big games like another SEC football school?

Like I said, that Vanderbilt game in my freshman year stands out. At the time, our coach was Joker Phillips, who's now the wide receivers coach for the Browns or something. I think it was the fourth or fifth game of the year? We weren't that great...we were terrible. After that game, I thought, "I now see that this is a basketball school."

Growing up in Missouri, I went to all the football games. Every one has that vibe. I was hoping I'd get that college football experience at Kentucky because I love college football. And in my freshman year, I was really disappointed. Fast forward to the next year: we hired Mark Stoops. There was a slight buzz, but people still didn't buy in. The next year everyone started buying in: we started having a larger student section; we started having that vibe.

The South Carolina game last year was probably one of the top five UK moments so far for me. Counting basketball. That was the moment I realized that now we have a football team. We're not a football school, but we're not just a basketball school. We stormed the field, and everyone was hyped. The players were hyped. Mark was hyped! This year, that Florida game...the outcome was not what we wanted, but the atmosphere was up there as one of the best college football games I've been to. I've been to a lot of SEC schools, and it definitely rivaled those.

In the past, has it been difficult to get students excited about football when basketball is such a huge draw? I'm assuming that's changed.

My first year, we were just trying to get people to buy in. So we started doing a lot of promotions just to incentivize people to come: t-shirts, game nights, Blue Outs, etc. Last year, we didn't have to do as much of that, but we still did it because students like free stuff. [Writer's note: This is accurate.]

This year, we've taken more to the social media side, things that get people more hyped. That may just be doing highlights from last year, counting down the days (until football season) and just making it seem like, "Well, TEAM WILDCAT is counting down to football, maybe we (students) should be too." I think it worked really well. A lot of people feel like they have something too look forward to that isn't basketball.

In your opinion, what would it take to get Kentucky football to the level of Kentucky basketball or at least close to that level of popularity?

Well, I'd say the first step is getting bowl game. Which I really think we'll get this year. Fingers crossed.

I would say if we get a bowl game and continue to make baby steps. We don't need a national championship, but as long as we're competitive, the people of Kentucky will be very, very supportive of their school. The people here are nuts. As long as we continue to make the steps to show that we're improving, we'll continue to get that backing.

How do the students and fans feel about this year's team? And what do you think is this team's identity? At Missouri, we love our defense, but everyone is concerned about the offense. Maybe we're a little spoiled.

I don't think there's one thing that everyone gets excited about just yet. They're making progress. Last year it was the defense. We had a couple of strong defensive players that we don't have anymore because they're doing bigger and better things in the NFL.

This year, everyone loves Boom Williams, our running back. I would say he's our best player. Everyone loves Boom. Personality-wise, everyone loves Patrick Towles. He's definitely given a personality to the team and to himself that no one else has. We like our wide receivers too. Offense in general is kind of the identity of this team.

What's the Kentucky fan base's view of Missouri's football program going into this game? Are they expecting to lose or win?

I've always respected Mizzou as a fantastic football team. People here respected them after they made that first SEC championship. After that, it was a different story. The first year, they (Kentucky fans) all thought, "They're no better than us." I think the progression over these past few years...I mean, they're the top of the line. This year they're struggling a bit, but they're still a team to be reckoned with because they've been so good these past few years.

Coming into this game, I think if you asked 100 Kentucky fans, you'd probably get about 75 saying we're going to win. I think right now you still might have a slight edge on us, but people here are starting to realize that we're up and coming and we can beat these guys. I think the general consensus is that Missouri is for real. And we're not shunning them as the outcasts like most Mizzou fans might like to think. I think there is a lot of respect for Missouri.

This might be the third-most popular game on the schedule, aside from Louisville: Florida was this past week, Auburn is our Thursday night game. But this is the game that people think if we can win, we're actually making progress.

Honest opinion: You could potentially see State Street at a college basketball level with everyone losing their minds. Because Missouri is someone we haven't been able to beat, someone that's consistently good and someone that would put Kentucky football on the map if we won this game.

To finish it off: Give me your official prediction for the game.

Can I give you two?