More from the 2012 Missouri-Kansas game, but this time from a different viewpoint.

Share All sharing options for: Remembering a Rivalry: 2012 Missouri-Kansas at Mizzou Arena

Editor's note: To accompany Jarrett Sutton's last two pieces, we also asked Robert O'Neill, from BigEastCoastBias.com, to write about his experience during the last game between Missouri and Kansas. Robert was a J-School student at Missouri now, and does great work on BECB, so give him a follow and read his stuff over there.

I've been lucky enough to go to some pretty awesome sporting events in my life. Carlos Zambrano's no-hitter in Milwaukee in 2008, Game 1 of the Cardinals/Brewers NLCS at Busch Stadium in the middle of St. Louis' improbable World Series run, the 2012 Big 12 Championship at the Sprint Center where Missouri beat Baylor to leave the conference with the title. I've been incredibly blessed in my life. However, one sports memory trumps all others, and likely will forever. The last Missouri/Kansas basketball game at Mizzou Arena on February 4, 2012.

First, a little more background about me. I didn't get accepted into Mizzou until May or June of my senior year of high school. Some paperwork got mixed up and they didn't have my correct ACT score and whatnot. Once that got figured out, it was too late to buy the football and basketball combo tickets, and you couldn't buy just basketball. So I was essentially screwed in terms of going to any sporting events at Mizzou my freshman year.

2009 was a special year, it was the year Mizzou returned to the Elite 8 and took UConn to the wire before finally bowing out. It was also the year that Mr Coffee earned his nickname.

Whether is was John Brown, Theo Franks, Lee Coward, Corey Tate, or today's hero, Marcus Denmon. It's been four years since the Tigers played the Jayhawks in today's memory.

As Mizzou/Kansas drew closer and closer however, I knew it was a game that I wasn't going to be able to miss. Luckily, there were student resale groups all over, but everyone knew that this game was a big one, and tickets were going for way out of my price range. Then, one day, out of the blue, I was looking on one of those groups, and found a ticket for $100. While still pricey, I knew it was the cheapest I was going to find. I messaged the seller and met up with him within a half hour to make sure no one leapfrogged me. I wasn't gonna lose out on that ticket.

The anticipation continued to build all week for me and my friends. Most of the people I lived with in Hatch Hall my freshman year weren't even from Missouri, oddly enough, but we all couldn't be more excited about this game. On the night of February 3rd, we made the decision to go to College Gameday the next morning. We wanted to get the full experience of the last Mizzou/Kansas game at Mizzou Arena, possibly ever.

So, after an all nighter and a 4 AM trip to Wal-Mart for blankets, we made our journey to Mizzou Arena to stand outside in the cold and rain and wait for the doors to open for Gameday. Some students camped out for 2 or 3 days to get the best seats for the game and Gameday, but I didn't really care about getting the best seats. Just being in the building was good enough for me.

College Gameday, when you're watching on TV, looks like an absolute blast. Amped up students, hosts breaking everything down, all of that.

However, when you go in person, it's... not that great. Maybe it was just me, but I found that I couldn't hear much of anything, and the only fun parts were when they took b-roll camera shots for commercials and bumpers and stuff. Maybe it was also the fact that I hadn't slept in 27 hours. It's probably an unfair comparision, but the few people I know who went to Mizzou/Oklahoma College Gameday on the Quad for Homecoming 2010 said that one was infinitely better. I didn't care too much, though, after leaving Mizzou Arena for Gameday, the only thing on my mind was picking up a couple hours of sleep before we had to head back for the actual game.

I don't remember any other basketball games from February 4, 2012. ESPN's scoreboard tells me it was a pretty tame day, so I didn't miss much. As soon as I hit my bed after Gameday, I was out cold. The next thing I remember was my alarm going off at 3:30 PM. It was time to head back over to Mizzou Arena for the showdown.

It was a bit warmer at this point than it was at 6 AM, so that was nice, but standing outside in early February was still annoying, especially given the anticipation. We all just wanted to get inside. Soon enough, we did. Unfortunately, my friends and I were late arriving, so the student section was all full, leaving us standing in the very back of it, technically on the concourse. No matter, we'd be standing the whole time in the student section anyway, so there was no real difference. We were in, and shortly, it'd be time for basketball.

After grabbing a chicken tender basket (Aside: the best food item Mizzou Arena has in terms of value and quality), I headed back to my post. It was important to me to maintain my position up against the railing of the last row of the student section, because I didn't know how many other people would be in the standing room only section, and I certainly didn't pay $100 to have to stand behind 4 rows of people, who are standing behind an entire section already. I wanted to be able to see the game.

Soon enough, the intros began. Truman came down from the ceiling, "Run This Town" blared as highlights from the season played on the board, and the crowd was loud as could be. After the intros, it was time for basketball.

The crowd noise didn't dissipate after intros. In fact, it grew, if that's possible. It was just a constant stream of noise. When Mizzou went into the half up 39-34, the crowd was thrilled. But I think most of us, in my immediate group, at least, knew it wasn't going to be this easy. Kansas was going to go on a run at some point. 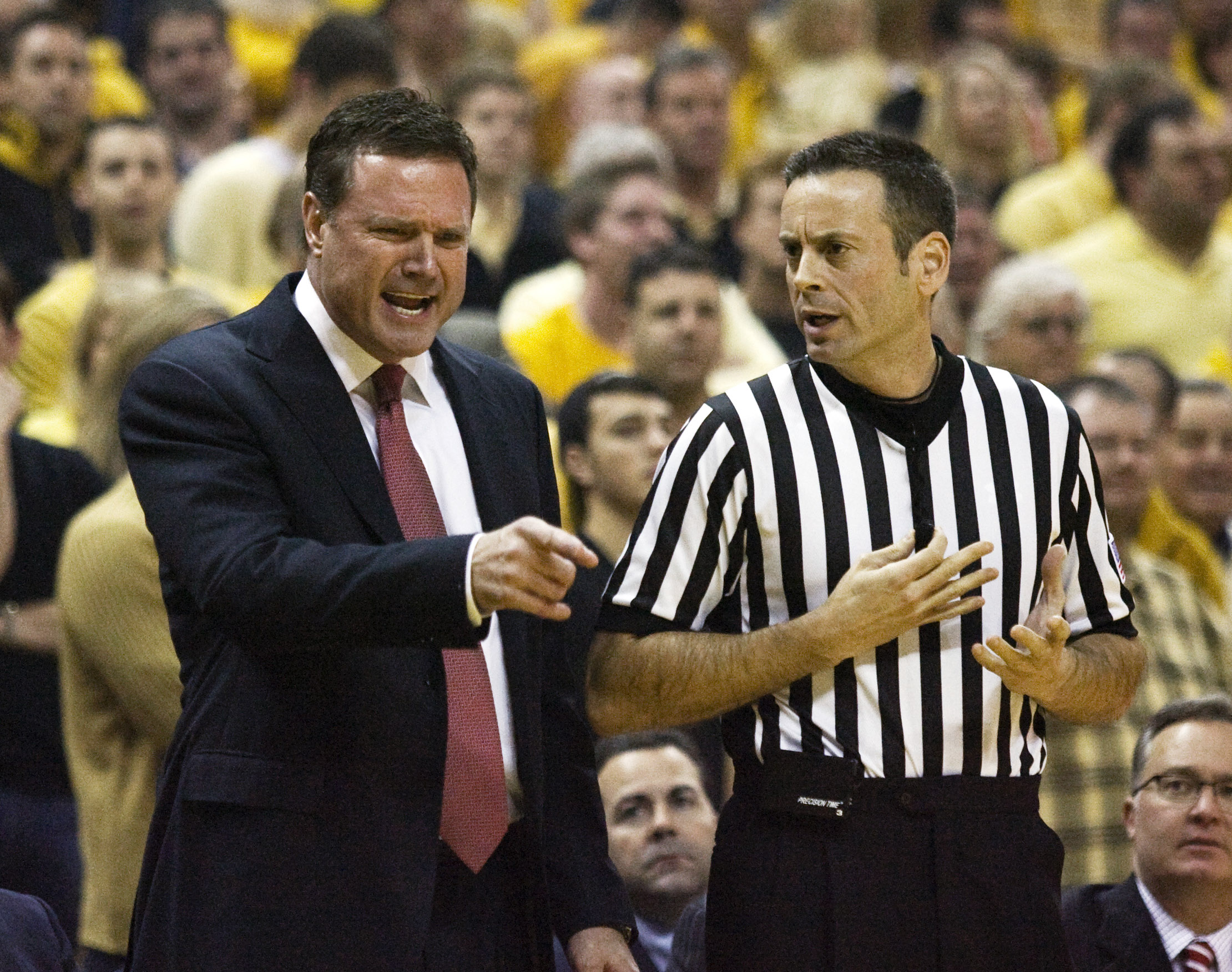 Wouldn't you know it; we were right? By the halfway point of the second half, Kansas had gone up 60-53. Mizzou hung around and got the lead to manageable depths, but before we knew it, there were two and a half minutes left and Kansas was up by eight points.

I know you'll think this part is just revisionist history or me trying to tell a good story, but I swear to you it isn't. Even being down by eight with three minutes to go, I knew deep down Missouri wasn't going to lose this game. Sometimes you just get a feeling about sports. I had one that night.

You all know what happened by now. Denmon went down and made a layup and got fouled to cut Kansas' lead to five. Steve Moore came in and drew a charge on the other end. Denmon came back down, took a pass from Mike Dixon, and hit a running three, a shot that I have no idea how it went in. Kansas' lead was down to two with 1:30 to go, and Mizzou Arena was up for grabs. Then, Mizzou forced a turnover, came back down, and slowed the pace up. We're inside a minute remaining at this point, and Mizzou Arena is absolutely frenetic, and then, wouldn't you know it, Marcus Denmon steps up AGAIN, and Mizzou was up 72-71. My feeling intensified, now that winning looking to be more of a reality, but they weren't out of the woods yet. Tyshawn Taylor got fouled on the other end, and missed both free throws. Now, Taylor was a 68% FT shooter, but I don't think Steve Nash would have made two free throws at that juncture, with the student section absolutely rabid. Phil Pressey went down and missed the front end of a one-and-one, and suddenly it was Kansas ball with the shot clock off down by one. I still had that feeling that Mizzou was winning the game, but Thomas Robinson was in the back of my mind as well. He already had 25 points and 13 rebounds at this point. As Kansas brought the ball up, seconds seemed to last minutes. With 9.8 seconds left, Tyshawn Taylor drove in and was called for a charge! The second charge call to go against the Jayhawks in the final minute. Michael Dixon hit a pair of free throws to make it 74-71, and Kansas couldn't execute on the three to tie the game. Mizzou improved to 21-2 and had won the final home Border War. 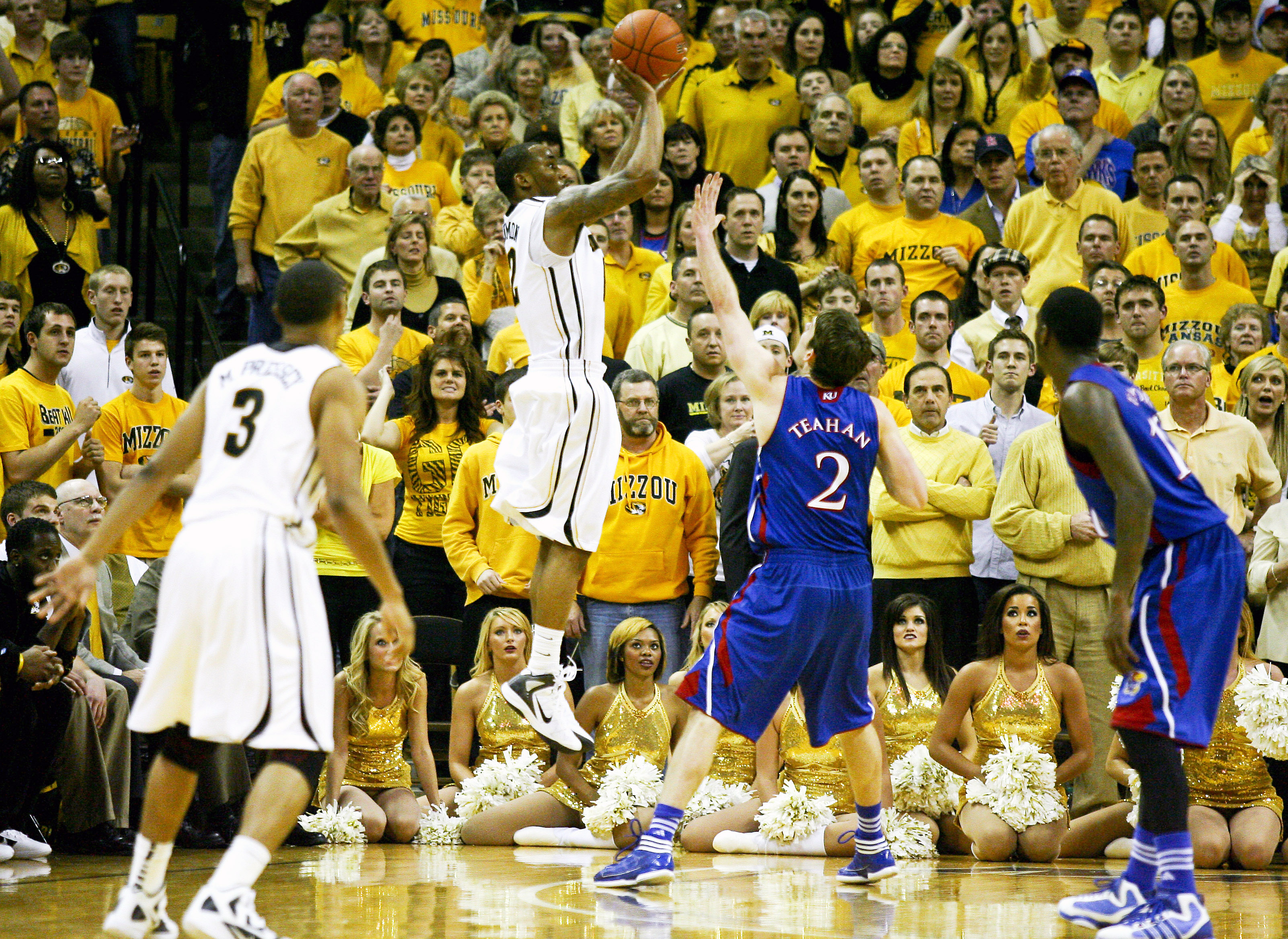 There really wasn't a court storm. Had there been, I would have been way too high up to partake anyway. I remember high fiving and hugging as many people as I could. I've never seen such elation at a sporting event, and I haven't since.

This past December, I graduated from Mizzou with a degree in Sport Management. I'm back home in the Chicago area now, and will likely be here for the foreseeable future. But every year around the first week of February, I go back and re-watch that game. It's held up incredibly well, and, for me, it's something bigger than just a basketball game. It's the best memory I have one of the best times of my entire life.