Over the past couple of weeks, I've been putting together a series of Mizzou-specific history pieces based on my estimated S&P+ ratings. As you see in the links below, we've looked at Missouri's best and worst decades, offenses, and defenses.

This series is an attempt to parallel what I did earlier in March at SB Nation, and one of the pieces I wrote there was in regard to the "best matchups" of all time. We all have our own opinions about what were the truly biggest or best matchups, but I wanted to take a look purely from a numbers perspective. I wanted to look at the games that featured the greatest combined quality of two teams. Recent games like 2008 Florida-Oklahoma (No. 1 vs. No. 2 in S&P+), 2005 Texas-USC (ditto), etc., graded out highly, as did the classic 1971 Oklahoma-Nebraska games (along with some games you might not have expected).

I thought it would be fun to do the same for Mizzou games, but there was a slight problem: As you might guess, it's basically a list of Missouri losses. Missouri has been awesome plenty of times through the years, but the Tigers haven't both a) been awesome and b) knocked off top-ranked teams very often.

Going by the criteria I used at SB Nation -- best combined percentile ratings, the "best matchups" of all-time involving a Missouri team were the 1998 games against Ohio State and Kansas State (both losses) and 1969's Orange Bowl against Penn State (a loss). In all, in the 13 "biggest" games, Missouri went 2-10-1. Ouch.

With the year that Missouri has had as an athletic program, I felt some happy memories might not be a bad idea. So in the coming weeks, we'll look at the "best matchups" in Missouri history that resulted in actual Tiger wins.

The biggest problem with this: There's no obvious name for such a series. I've already spent far too long trying to come up with a good one, and I've failed. So I'm going simply with "Missouri's 20 biggest wins." These aren't the most IMPORTANT wins, and they might not be the most significant -- among other things, Mizzou's 36-28 win over Kansas in 2007's "Winner moves to No. 1" Arrowhead battle (i.e. the biggest must-win game in school history) only resulted in a combined percentile rating of 1.765 (Mizzou ranked 10th in S&P+ that year, but Kansas ranked just 17th). That was, to my mind, the "biggest" win, but it doesn't belong here.

If you have a better name, I'm all ears, and I'll happily change this on the fly. But for now, we're going with "biggest wins." And here's No. 20:

In a way, the disappointment, the what-if nature of the 1983 season eventually got Warren Powers fired. In 1983, Missouri's defense was incredible, ranking eighth in the country in Def. S&P+. The offense improved dramatically after a 1982 collapse, and the 1983 Tigers ranked a healthy 10th overall in estimated S&P+.

The problem: The Tigers didn't seem to have much confidence, or luck, in close games. Warren Powers seemed to use up all of his close-game karma with wins over Notre Dame, Nebraska, and LSU in 1978. From 1979-82, the Tigers went just 6-9-2 in games decided by one possession. And in 1983, it got worse. Mizzou fell in Madison to a decent Wisconsin team, 21-20, then got knocked off by East Carolina, 13-6. Granted, it was a pretty good ECU team, but still. Missouri was awesome but had just a 5-3 record to show for it when Oklahoma came to town on November 5.

Even with the win over Oklahoma, Mizzou managed to fall asleep and lose in Lawrence, then lose in the last second to BYU. The Tigers were an excellent team per the numbers but went just 7-5. That meant Powers had no margin for error with frustrated Mizzou fans and administrators in 1984. The Tigers' offense played wonderfully, but a far less experienced defense made too many mistakes. Mizzou lost September games to Illinois, Wisconsin, and Notre Dame by a combined nine points and stumbled to 3-7-1, and Powers was fired.

After his beautiful 1978 debut, Powers just couldn't get the timing right. He had an elite defense in 1983 and a nearly elite offense in 1984 but went just 12-12-1 in those two seasons, and that was that.

OU was pretty frustrated in its own right when it came to Columbia in 1983. The Sooners were the preseason No. 2 team in the country, boasting a new I-formation offense and a backfield led by former all-world recruit Marcus Dupree. The Sooners had gone just 7-4-1 and 8-4 over the previous two seasons, but huge things were expected.

OU mostly looked the part of an excellent team and ended up ranking 14th in estimated S&P+, but frustrating losses to No. 6 Ohio State and No. 2 Texas had knocked the Sooners down to 16th in the polls. Dupree suffered a concussion, then announced he was transferring to Southern Miss.

On November 5, OU seemed to have gotten its act together. The Sooners won in Stillwater against a good OSU squad, then rocked Iowa State and Kansas by a combined 94-25. Even without Dupree, they had backs like Spencer Tillman and Earl Johnson, quarterback Danny Bradley, and receivers Buster Rhymes and Derrick Shepard (Sterling's father). They had plenty of weapons.

These weapons scored zero points in Columbia. Missouri kicked a field goal on its opening possession, added an Andy Hill touchdown reception in the second quarter, and continuously made stops around midfield against the potent OU offense. Fumble recoveries, missed field goals, fourth-down stops, interceptions ... Mizzou kept creating and receiving the breaks it needed. It was Mizzou's second straight home win over the Sooners after an 11-game losing streak to OU, and incredibly, it was OU's first shutout loss since 1966.

Missouri and Oklahoma were two frustrated teams when they faced off on a sunny November in 1983. Their combined record would end up just 15-9, but these were two high-ceiling football teams, and Mizzou won a slugfest. 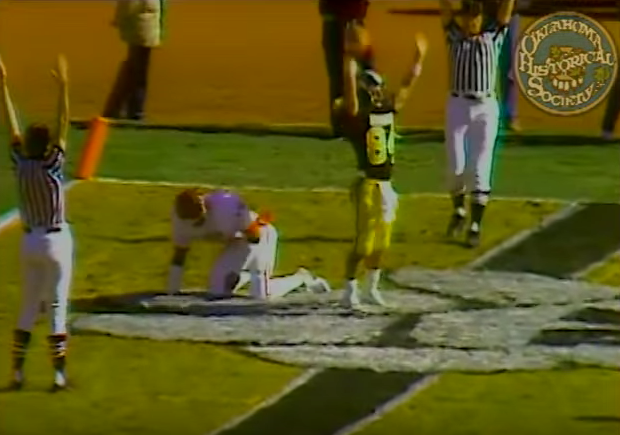 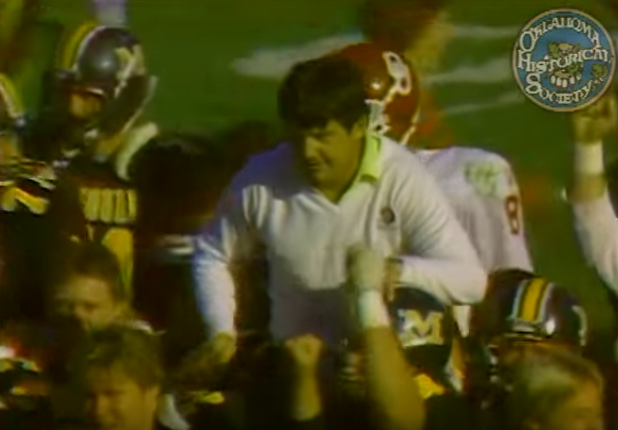 Warren Powers is carried off the field. 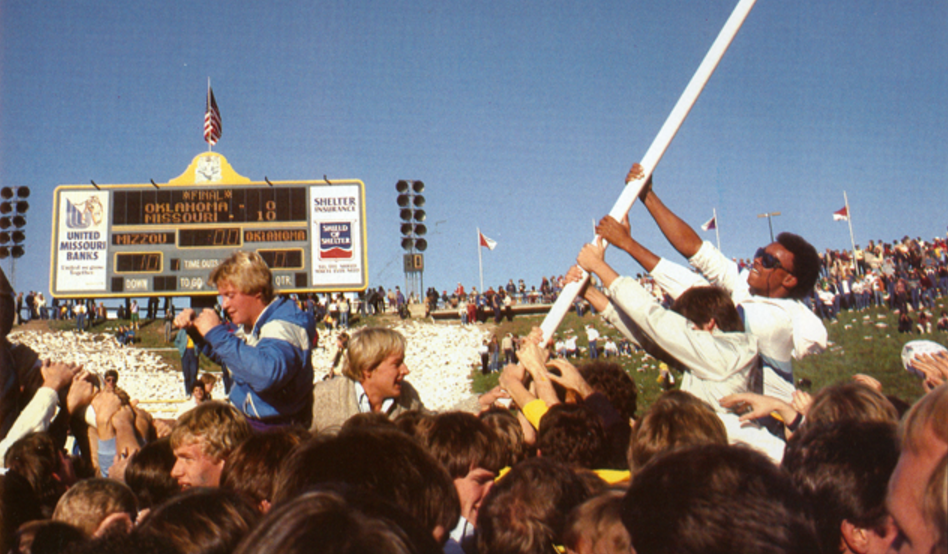 (Photo via The Savitar)