The Tigers land the teammate of current signee Willie Jackson.

The Missouri Tigers landed one of their top targets of the spring period when Frankie Hughes committed today. Hughes is the high school teammate of Mizzou signee Willie Jackson, and Jackson had apparently putting in work on the recruiting front as soon as Hughes got his release from Louisville, where he had signed in the fall. With Louisville’s impending sanctions, and it’s scholarship situation in a bit of flux, the two parties decided to part ways, which opened the door for Missouri.

Frankie Hughes has committed to Missouri

"[Hughes is] a silky lanky guard with a compact jumpshot and a quick release who projects as a combo guard at the next level. Although he played more off the ball in High School, he handles the ball well enough to play the point in college, so could be the answer at backup PG. Missouri is certainly very interested, and feel that Hughes would be attainable to land. So don't be surprised if he ends up in Columbia."

The Tigers coaching staff feels that Hughes can handle minutes at the point, and projects as a combo guard, despite being more of a shooting guard in high school and on the AAU circuit. When playing alongside Terrence Phillips he will obviously be off the ball, but the staff is trusting that Hughes can handle his own if Phillips needs a spell. With two scholarships still open, Mizzou has the replacement for the position that Tramaine Isabell held: spot starter, backup point guard, but a guy who can make shots.

Missouri currently has two scholarships available, they had another visitor on campus this weekend in Point Guard C.J. Jackson who is one of the candidates for the other guard spot the Tigers are planning on taking. Some of the other possibilities have fallen off in recent days, Kyran Bowman committed to Boston College and Tyson Jolly has been reduced to a whisper in light of his desire to play in the Big 12. The other major candidate is Deshawn Corprew, who has still yet to plan a visit to any of his top schools, but the Tigers are firmly entrenched in the running to land Corprew. Jackson is a hot priority for Missouri in light of the other options falling away, and the 6-1 guard from Eastern Florida State College is one of the best shotmakers on the market, and Missouri is one of four schools with a shot to land him. Missouri hopes, at this stage, to land one of Jackson or Corprew.

The question then remains if Missouri will use its 13th scholarship this year. The Tigers would prefer to, but their want for a big man, and the available big men left might prohibit that. Cheickna Dembele seems to be blowing up, and Missouri is hoping their early work will give them an edge, but Syracuse, UConn and Iowa State might be tough to turn down. There’s still the outside chance Omer Yurtseven could fall into their laps late this summer, but that’s a longshot. And I’m told that the Tigers won’t take a big just to take one, that they’re happy with their current incoming freshmen and believe that Willie Jackson and Jordan Barnett can be a tough matchup at the four spot if need be.

So with one more on board, we welcome Frankie Hughes to the Tigers. Welcome to Mizzou, young man. We hope you prosper. 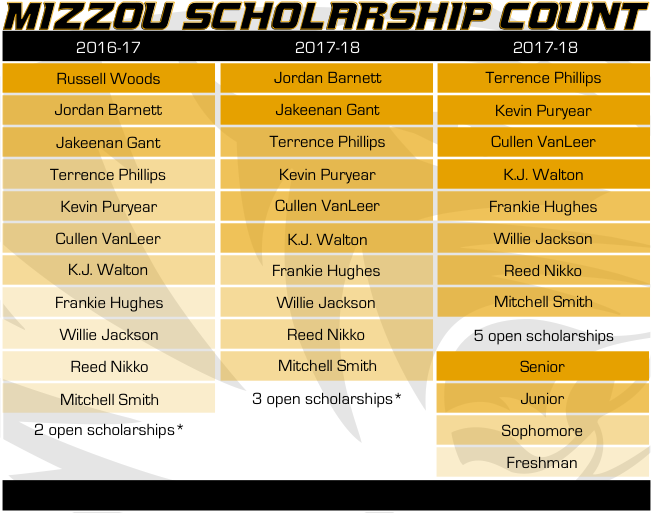