Missouri's 1968 season was noteworthy for a number of different reasons. The Tigers beat No. 13 Nebraska in Lincoln right before the Cornhuskers had the pieces together for back-to-back national title runs. They destroyed Alabama, 35-10, in the Gator Bowl to finish in the top 10 and set the table for an incredible run in 1969. They obliterated Illinois in Champaign for good measure, too.

But the almosts of the season almost overshadowed the accomplishments. They began the regular season with a tight 12-6 loss at Kentucky, and they finished with a two-point loss at No. 7 Kansas, which gave the Jayhawks the Big 8 crown. But from a statistical standpoint, this team was fantastic -- Mizzou took on a rough schedule, outscored opponents 308-136, and showed offensive upside it had perhaps never possessed under Dan Devine.

Maybe the most impressive win of the year, however, came in non-conference play early on.

Army had fallen from football's elite over the previous two decades; the Cadets had finished 11th or better in the AP Poll every year from 1943-50 and put two of the most dominant teams of all-time on the field in 1944 and 1945. But after finishing 8-0-1 and third in the polls one last time in 1958, the program took a step backwards, still finishing with mostly strong records but not threatening to play at an elite level.

Army came really close in 1968, however. The Knights went 7-3, losing by a combined 12 points to Vanderbilt, Missouri, and a fantastic Penn State team. They beat a ranked California squad and pretty much crushed everybody else -- they beat Rutgers 24-0, Duke 57-25, Boston College 58-25, and Pitt 26-0. This was a strong, top-15 caliber team.

And if Missouri didn't realize it, the Tigers were probably catching on by their sixth or seventh turnover.

The calling card of most Dan Devine teams was defense, and thankfully for the Tigers, it came to play on October 5, 1968, in front of a record crowd of 58,576. Despite a solid running back in Charlie Jarvis (who would go on to rush for 1,110 yards that year), Army gained only 179 yards, converted 11 first downs, and committed six turnovers. The Cadets had no answers for Mizzou's defensive line of Joe Hauptman, Rocky Wallace, Carl Garber, and Steve Lundholm.

Army's defense, meanwhile, pounced on every Missouri mistake. And Mizzou made plenty. New starting quarterback Terry McMillan made his home debut with high expectations, and while he would eventually take the Tigers' offense to solid heights, his first game was pretty dismal. Of his 12 passes, three were caught by Mizzou players, four by Army players. Backup Garnett Phelps came in for a spell and went 2-for-8 with two picks.

Mizzou scored early thanks to field position provided by a 53-yard Roger Wehrli punt return. (The future hall-of-famer would also pick off a pass and return it for 32 yards later in the game.) Greg Cook plunged in from a yard out, and then the offense set about its self-destruction. The Tigers' defense made an stand when Army recovered a fumble at the Mizzou 26, then stopped most Cadet drives before they started.

Army's Arden Jensen hit a 46-yard field goal in the fourth quarter, but the early points were thankfully all Mizzou needed. The Tigers' nine turnovers were offset a bit by Army's six, and Mizzou's run game worked just well enough to control field position. Cook rushed 33 times for 138 yards, while Joe Moore added 15 for 81. After 60 minutes, the Tigers had secured Dan Devine's 100th career win (and 73rd at Mizzou).

First impressions are overrated. As poorly as McMillan played in this game, he was otherwise 53-for-101 for 726 yards, four touchdowns, and three interceptions in 1968. And he erupted in 1969 during one of Mizzou's best ever offensive seasons: 105 completions, 1,963 yards, 18 touchdowns, 13 interceptions, and seven rushing TDs.

And in case you were wondering if things ever actually change in Missouri, here's a blurb from the St. Louis Post-Dispatch's Bill Beck:

A crowd of 58,576, largest ever to see an athletic event in the state of Missouri, cheered more for transistorized reports of the Cardinal victory in the World Series than it did for the spectacle being witnessed on the field. 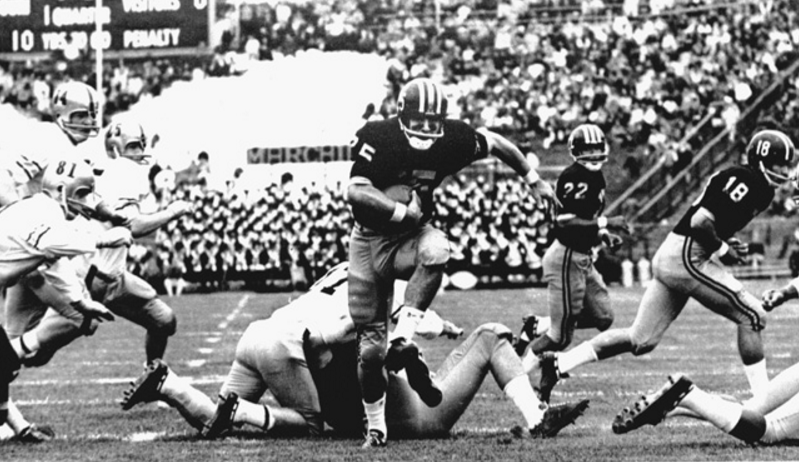 (Photo via the Savitar)