Today we reach a game that I've written about a lot. So I brought in a guest star for a fresh take.

Rock M reader Robert Stanley was Missouri's equipment manager for 20 years, from the late-1970s to the late-1990s. He had some thoughts to share about this game from his up-close-and-personal vantage point. Enjoy.

The Nebraska game at the end of the '78 season acts as a bookend to the Notre Dame game to frame what was a very successful first season for Warren Powers, a young coach on the rise. Regretfully, it could be argued that the win in Lincoln marked the high-water mark of Warren's coaching career and set a standard that he spent six more years trying to live up to. Not to say there were not good seasons ahead, or even that there were not some nice wins in the offing, but the truth of the matter was that never again did Warren match the success he had so tantalizing dangled in front of Missouri fans starved for gridiron glory.

We had just come off of two games where we had absolutely destroyed our opponents. The offense seemed to be hitting on all cylinders, and a crushing of arch rival Kansas was the sixth win of the season. That meant talk of a possible bowl game was starting to circulate.

Mizzou's 1978 campaign was dramatic from start to finish.

In 1978, there were a total of 15 bowl games. This meant that only 30 teams were going to be rewarded for success. Compare this to the 40 bowls that rewarded 80 teams in 2015; some of the teams were rewarded despite the fact that they had losing records!

Six wins were not going to get you in a bowl in 1978. It was going to require a win over Nebraska. The Huskers had a nine-game winning streak and a victory the week before over No. 1 Oklahoma, a team which had dismantled the Tigers in Norman earlier in the season. It would be a tall order to imagine the Tigers bowling in 1978.

All week prior to the game, the weather reports were predicting arctic temperatures in Lincoln for the upcoming Saturday. Today's football programs are well-equipped with an array of high-tech apparel to cover all weather conditions. In 1978 we did not have near the number of options to deal with extreme temperatures. We had a number of long-sleeve thermal shirts in stock, but it was obvious that was not going to be enough.

I was concerned about the skill guys being able to keep their hands warm while on the field. i found a couple of dozen old track sweatshirts that had the muff pocket on the front and a hoodie. They were a little on the small side, and the sleeves were going to be too much for playing in. I wound up cutting the sleeves off at the shoulder and cut the hoods off of some of them to make vests for the skill players. We bought a bunch of the chemical hand warmers that hunters use in the winter, so the players would have something to keep in the muffs to warm their hands.

Our worst fears were confirmed as we drove across the Nebraska border Friday evening, heading into Lincoln to set up for the game. It started to snow. It was a wet, heavy snow but tapered off as we approached town. Luckily it was not something we were going to have to deal with on Saturday.

When we got to the hotel and tried to check in, we were told there were no rooms available for us. We were stunned. We always had rooms waiting for us everywhere we went. We tracked down the athletic department advance man and asked about our rooms. He informed us that he had to give them away to some donors who had made their way to the game and needed rooms. To say we were not happy would have been an understatement. Our hotel found us rooms at a dumpy little hotel down the road. When we opened the door to our room, cock roaches the size of small rats scurried for cover.

The only saving grace to the night was that we stumbled across a steak house called Misty’s and had a great meal and made a friend of the manager who would go on to be a real friend in the coming years.

The game that day was one for the ages. On the opening play of the game Husker tailback Rick Berns ripped off an 82-yard TD run. As Berns crossed the Tiger goal line, not many people noticed that he was closely followed by Tiger defensive tackle Steve Hamilton. I thought it was a sign of the determination of the whole team that a 280-pound defensive lineman would make the effort to chase Berms the length of the field.

This opening score was the first shot in a slug fest, and Missouri would match Nebraska touchdown for touchdown. Between the two teams, there were only five punts on the day. Berns set a Nebraska rushing record with 255 yards, but he was matched by James Wilder's 181 yards and a Missouri-record four touchdowns. The difference in the game was, in part, that Missouri’s defense stiffened and held one Nebraska drive to a FG rather than a TD.

We went into halftime down by three. One thing was certain: Nebraska was not a better team than we were, and the Tigers were full of confidence and eager to get back to work. Just before we went back out to the field, Powers suddenly jumped up on a trainer's table in the middle of the room and shouted, "Men, we have them right where we want them. They don’t know whether we are going to run or pass. Let's go out and finish strong." This was reminiscent of his halftime speech at Notre Dame, which presaged that win. [Editor's note: We'll get to that one in this series soon.]

In the third quarter, the Tigers and Huskers exchanged touchdowns. It was becoming obvious to anyone in the stadium that this game was probably going to come down to who could score last.

If you have never been to a game in Lincoln, it is well worth the experience.The fans are very knowledgeable and appreciate a well-played game. And you will not find many stadiums that are louder than that one. They are into it from kickoff to the end, and on that Saturday it was hard to talk to the person next to you and be understood. It was that loud.

James Wilder, Earl Gant, Gerry Ellis, and quarterback Phil Bradley were shredding the Husker defense with runs right into the heart of their defense, and each was blocking for the other like it was drawn up in the playbook. Several times the Huskers barely managed to bring down a Tiger ball carrier as he broke through the line. Bradley continued to connect with Winslow behind the linebackers, and with the ball in his hands it looked like man against boys -- Kellen ran wild in the Husker secondary.

The fourth quarter saw both teams playing it close to the vest. The Tigers had already capitalized on a couple of Husker turnovers, and the Tiger D had kept things uncomfortable in the pocket for the Nebraska quarterback. As the clock wound down toward under five minutes, the Tigers put together a drive the featured some tough running and was highlighted by a slick Bradley pass to Wilder that went for about 30 yards to the Nebraska 14.

A couple of physical runs put the ball on the seven, and the next play put the ball in the end zone for the Tigers' first lead of the game. James Wilder had taken the ball on a simple dive play and went right though the defensive line. He was met at the four-yard line by a Nebraska linebacker who took him head on. James literally grabbed the player with his right hand and threw him on flat on his back and stepped right over him. At the goal line, he was met by two defensive backs that he carried right into the end zone.

All four of Wilder's touchdowns had been scored over the left side of the Tigers' offensive line. A photo the next week in the school newspaper the Maneater showed Mark Jones, the Tigers' left guard, pointing in the face of a Husker lineman and yelling something. Later the next week, I caught up with Mark and asked him what he was yelling. Mark was normally very quiet and even-keeled. But he confessed that he had gotten carried away in the moment and had yelled at the Husker in question, "That one was over you, motherf***er!"

The Tigers had their first lead of the game with a little over three minutes remaining. The next day on the national NFL pre-game broadcast, Brent Musberger showed the run, saying, "Ladies and gentlemen, you are about to see one of the greatest seven-yard runs you are ever going to see."

The game was not over, and on the Tiger sideline George Wheeler (defensive line coach) was gathering his players. He grabbed Wendell Ray by the face mask and shouted, "We need sacks, baby!" The Tigers went out and played like men possessed. Nebraska managed to move the ball into the Tiger end of the field, but a final fourth-down pass down the sideline to TE Junior Miller was overthrown in the face of fierce pressure, and the Tigers ran out the clock.

As the ball had fluttered to the field on that final throw, the stadium finally went silent. It had been deafening all game long, and suddenly it was as if the stadium was empty. The Husker faithful knew it was over. Tiger players ran onto the field in celebration. Warren was lifted onto players' shoulders and carried a short way across the field before he got them to put him down.

In the locker room, Dave Hart, the athletic director, came in and announced that due to our win we had been invited to the Liberty Bowl in Memphis. The players went crazy one more time.

By the time we had loaded up the truck for the trip back to Columbia, the stadium was silent and empty. The only exception to the stillness was the sound of a tin can tumbling down the stadium stairs. It only served to highlight the stillness left behind from the afternoon's crazy events.

As we climbed into the truck, Glenn Abbot, the long-time Husker equipment manager, and his assistant Mike came running up to the truck and handed us a bunch of T-shirts and caps. He told us that that was one of the best games he had ever been a part of, and he congratulated us on the win. Glenn didn’t have to do that, but it was much appreciated. Over the course of the years, Glenn and I became friends, and I always found the trip to Lincoln to be very enjoyable even it the subsequent results on the field failed to offer much satisfaction. 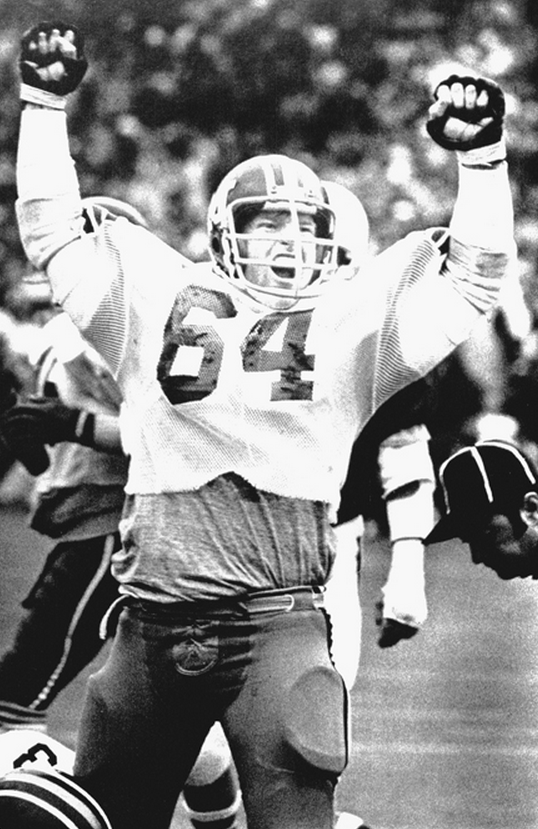