Going by combined quality, the best Missouri win ever over Nebraska came in 1969.

It had already been an eventful season for Mizzou when Nebraska came to town on October 12, 1969. The Tigers had already cleared a surprisingly high hurdle in taking down Air Force, romped over Illinois in St. Louis, and destroyed Bo Schembechler's Michigan Wolverines in Ann Arbor. At 3-0, they were up to seventh in the AP poll, welcoming Bob Devaney's No. 20 Huskers.

Nebraska was rounding into elite form in October 1969; after losing this game to Missouri, the Huskers wouldn't lose again until the 1972 season opener. They would win the final seven games of 1969 (including season-ending romps over Oklahoma and Georgia by a combined 89-20) and go 11-0-1 in 1970 and 13-0 in 1971. They would win the next three battles against Missouri by a combined 119-7. But on this cloudy October Saturday, it was obvious that the superior team was the one in black and gold.

Take it away, Bob Broeg:

Unbeaten Missouri hit monolithic Nebraska today with two touchdown passes -- one short and the other long -- and then chopped down the Cornhuskers with a sterling standup defense, 17-7.

A 69-yard scoring pass from Terry McMillan to Mel Gray rocked the red-knickered visitors on the Tigers' second offensive play of a wet afternoon in mid-Missouri. And then Ol' Mizzou used two pet offensive weapons to give its A-1 defense the only help it needed.

Dan Devine's defense, strong all year, made basically one mistake all day, allowing halfback Jeff Kinney to turn a short pass into a 77-yard touchdown early in the second half. The Tigers were otherwise flawless, rendering NU one-dimensional -- NU halfbacks were held to 59 yards on 23 carries -- and twice picking off NU passers Jerry Tagge and Van Brownson.

The first half began and ended in perfect fashion. Gray's long touchdown gave Mizzou an almost immediate 7-0 lead, and McMillan capped the half with an eight-yard strike to Tom Shryock with nine seconds left.

The 14-0 lead came in handy when Kinney scored early in the second half, but Henry Brown bombed in a 48-yard field goal later in the third quarter to all but seal the game.

McMillan had a particularly McMillan-like day; he was just 5-or-21 with two interceptions, but his two great passes were perfect, and both resulted in scores. Meanwhile, Joe Moore paced the Tigers with 38 carries for 134 yards.

Missouri's offense would catch fire in the weeks that followed; over the final six games of the regular season, the Tigers averaged 42 points per game while finishing 9-1 and winning the Big 8. But the defense carried the day here in a win that would continue to look better and better with the more games Nebraska won. 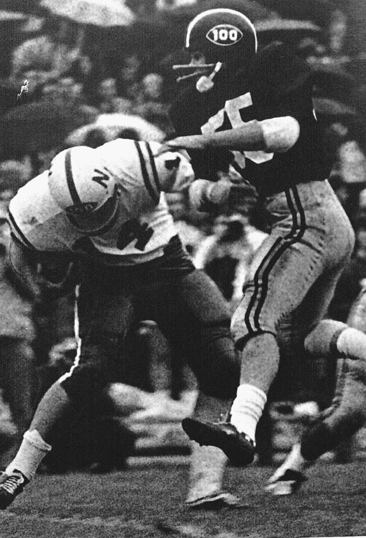