We've raised an absurd amount of money for MU Children's Hospital because of an off-hand comment on an Internet post eight years ago. Now, we're going to make that amount absurder.

My wife and I don’t have any kids. One day, she’ll probably trick me into that. When she does, I’ll be required to have a very odd conversation with my progeny.

Hypothetical Child: "Dad, what are you writing?"

Me, Still Dashing After All These Years: "Oh, it’s a stupid blog post about a stupid thing for a stupid website."

Child: "Why are you doing that?"

Me: "The year was 2010. Rock M Nation — it's a blog where people complain to each other about how bad their sports teams are — was already struggling to fill its admittedly tiny content quota. So we started a Rock M Nation Roundtable, which was basically an e-mail thread that we posted in its entirety."

Child: "That seems dumb. Also: what is e-mail?"

Child: "Got it. Continue, father whom I am increasingly distressed that I’m related to."

Child: "You mean your friend Bill who is decidedly not my uncle?"

Me: "YOUR UNCLE BILL C. asked us which Mizzou luminary we would like to see on Twitter. I’m not really sure why I said what I did, but it’s now etched in the annals of history that I selected Mizzou softball coach Ehren Earleywine. I didn’t know a ton about coach Earleywine, but I looked up his picture. This is what came up." 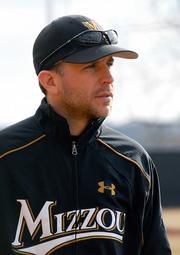 Me: "That’s what I said! So my response to the aforementioned e-mail question was:

Hey. I’m Ehren Earleywine. Yeah, my name's spelled a little funky, but what I lack in normal namehood I make up in tremendous stubble.

Me: "Exactly. So things kind of took a turn after that. The blog then decided to become best friends with coach Earleywine. We essentially shamed him into talking about us on a local radio show. And then we decided to turn this into a charity drive."

Child [looking up with a gaze of wonderment and respect]: "Dad?"

For the seventh consecutive year, we’re proud to raise money for the MU Children’s Hospital. It’s a building where doctors live and help sick kids!

This is actually pretty easy to explain: you pledge a certain amount for every game that the Mizzou softball team wins in the Women’s College World Series.

For your degenerate charity gambling needs: to win the national championship, the Tigers would need to win at least 10 games and no more than 12 games

And then there are the prop bets, and I’m going to be honest: this is probably where you need to live. I love coach Earleywine — He even e-mailed me once! It’s the event upon which I hang all of my self-worth! — but I think even he would admit that winning the Women’s College World Series this year is a bit of a longshot. We’re definitely rooting for them, but let’s be real: they’re underdogs.

That’s what makes the prop bets all the more intriguing this year. When we first launched this silly thing, our commentariat quickly started betting on everything. Literally everything.

And here’s another thing we should probably mention: your donation does not have to be contingent. If you want to offer a straight-up, no-questions-asked pledge of $1 or $10 or $100 or $1,000, that is absolutely welcome. In fact, it might take some of the pressure off of our girls!

As always, we ask that you announce your pledge in the comment section. It helps us keep track of the pledged amount. Plus, if you’ve never commented before, that’s quite a way to introduce yourself. C’mon, don’t be a lurker.

And now, something I add every year: it doesn’t matter how much you give. You guys remember RPT, former editor of this site? That’s actually Jared Kushner. Seriously! He’s going to be donating a lot. I’m just some nothing-burger Internet guy, so I’m not offering much. But in the case of this effort, we are equals. WE ARE EQUALS.

So, for the seventh straight year, it is my great privilege to kick off the Seventh Annual Rock M Nation Tremendous Stubble Charity Drive with the first pledge:

I, ghtd36, pledge $5 for every Mizzou win in the Women’s College World Series, and an additional $2 for every base hit by a Mizzou batter.

Cool out for a minute on that. We’ll settle up later. You’ll be donating directly to the MU Children’s Hospital, so you’ll get a tax receipt and everything. Here’s a fun fact: did you know that you have to pay taxes every year? I learned that recently! Weird, huh?

Let’s pick up the made-up conversation with my hypothetical child for this one.

Child: "OK, so you started a charity drive to help sick kids based off of a dumb Internet meme. Have you guys raised any money?"

Me: [ten minutes of high-pitched laughter]

Me: "You're never going to believe this."

Child [looking up with a gaze of wonderment and respect]: "Dad?"

Me: "That’s the title of my autobiography."

So yeah. We’ve raised more than $46,000 in six years for the MU Children’s Hospital, because of an Internet comment.

You might be asking yourself what MU Children’s Hospital has done with that money. Last week, I got an e-mail from Helen Oetting, the senior director of external relations for MU Health. (Side note: Helen has been amazing at helping us with the behind-the-scenes stuff for this. She is an actual adult holding our hand the entire time. She’s awesome.)

Anyway, I got an e-mail from Helen the other day. Here’s what it said:

Just wanted to touch base with you because I have some good news to share. The hospital has decided to use Tremendous Stubble donations to fund two Sensory Carts for patients at MU Children’s Hospital. You can check them out here. These carts are will be an amazing addition to the Child Life Program.

The Child Life Specialists are so excited about this purchase. I talked to one of them, and she said the main uses for the Sensory Carts are to:

Like…I don’t know about y’all, but that really hit home. Yes, we have a lactation room named after us. And yes, there’s another room named after the late great Bill Carter. But this one — the Sensory Carts — is different. Here is something the hospital has bought with our money that will make a direct impact on the lives of kids who need help. This is a weird feeling. I’m usually a pit of sadness and despair, but suddenly, I feel…warm? WHAT IS GOING ON?

You know how you’re on the Internet, like, right now? Make use of it by helping this thing go viral.

And root for Mizzou, of course.

I’m not sure that I’ve ever actually thanked you for making the Tremendous Stubble Charity Drive what it is. In six years, we’ve turned an Internet comment into more than $46,000 for sick kids, and that doesn’t happen by accident. That’s because of you. So: thank you. Really and truly. What you’re doing matters.

As always, we conclude with a photo from MU Children’s Hospital to guilt you into donating. 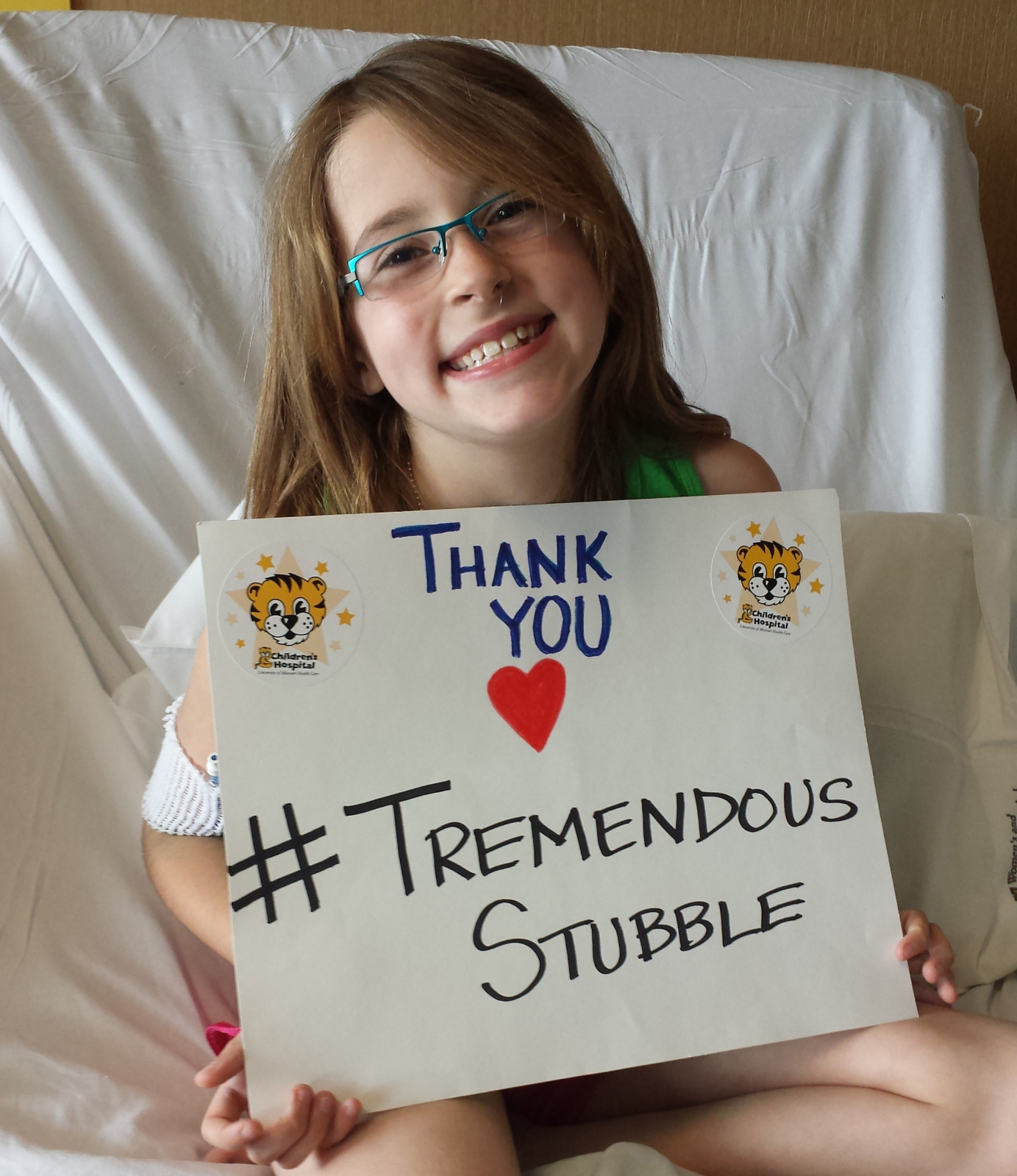 This is Jayla. What you're doing matters.

(And as always, we’re really sorry about all of this, coach Earleywine.)