It’s no surprise. The dude has brought in a whopping 7 new players and counting:

But a lot of people are wondering: is this crop of transfers actually any better than last year’s nine newcomers via the transfer portal and freshman class? I strongly believe it is for three key reasons:

You see it every year in the NCAA tournament. Massive upsets of top teams at the hands of tiny schools like Saint Peter’s, Oral Roberts and Florida Gulf Coast University - Dunk City, Dunk Dunk City, anyone?

Yes, it’s usually mixed in with sweet shooting from 3pt land and at least one or two athletic bigs, usually the unheralded, with a chip on their shoulder kind. But far and away the most important component is the point guard, the (cue Bill Raftery voice) little guy with the blow-by.

This year, Mizzou has Sean East; last year, it lacked any true point guard. If nothing else changed, that might be enough to win 5 games. Here’s why.

A solid PG can take over a game, even against a superior opponent, because he touches the ball nearly every possession, and there just aren’t that many possessions in the college game.

*All numbers courtesy of teamrankings.com

NBA teams are about 9 percent more efficient than NCAA D1 teams, scoring about 1.1 points per possession to the NCAA teams’ 1 point per possession. But 95% of the difference in scoring between college and the NBA — 40 points — is simply due to the college game having fewer possessions.

That’s less shots for deadeye 3pt shooters, fewer touches for big men in the paint, and a massive outsized importance for the few elite PGs who can control the tempo and flow of a game and handle the rock.

Worse, the team didn’t come close to making up for it anywhere else:

So to tell the story, Mizzou turned the ball over an insane amount, shot poorly and allowed its opponents to score way too much. They managed to grab a few more rebounds per game than their opponents on the offensive glass but not nearly enough to make up for all the other holes in their game, including defensive rebounding. Bottom line, in the college game, the point guard runs the offense, touches the ball on nearly every possession, and there aren’t enough possessions in a game to turn the ball over a ton and win — especially if you’re not great in any other area of the game.

The Tigers’ new point guard addition had a fantastic 2.8 assist to turnover ratio last season, including only 2 turnovers/game. East also sported a usage of 28%, in line with a ball-dominant true PG.

By contrast, Mizzou’s "PG" Jarron ‘Boogie’ Coleman, turned it over 2.7 times/game with a <1 assist/turnover ratio - he actually turned it over more than he generated assists. Amari Davis, Mizzou’s other "PG" was even worse. 1.3 turnovers to 1.1 assists/game. Mizzou’s third stringer, freshman Kaleb Brown, fared a tad better at 1.1 assists to .9 turnovers. But as you can see, East absolutely blows away all three, and his film is impressive. He can create off the bounce, generate buckets for other guys and score from distance, mid-range and around the rim. He’s a true PG who can get his shot too.

There’s every reason to believe that at the college game’s most important position, Mizzou has a major upgrade, one who can cut turnovers down to 15% of possessions, buying the Tigers 5 extra possessions a game and potentially another 5 points a game by running the offense effectively. That’s enough to have scored 5 extra points/game and won 5 games for the Tigers this past season decided by fewer than 5 points.

Defense Translates at Any Level and Has Outsized Importance in CBB

Scouts will tell you the skill that most directly and quickly translates up a level is defense. As mentioned earlier, Mizzou struggled mightily on defense last year:

That’s a full 3 percent extra points per possession than the average team.

You might say who cares about defense in basketball? But just as with the importance of the point guard position, the number of possessions in college games places outsized importance on defense vs. the NBA. Consider it this way:

In the NBA, with 106.5 possessions/game, players get 6 fouls. In college, with 70 possessions/game, they get 5. That’s 33% fewer possessions and only 14% fewer fouls to give per player. On top of that, college players only make 71% of their free throws to the NBA’s 77%.

So if we add it all up, the numbers tell you:

So playing hard, effective defense, even if it means fouling a lot, is a way to win in the college game. If Mizzou could bring in some plus defenders, that could add up to some wins, especially considering defense translates between levels.

Enter D’Moi Hodge, Tre Gomillion and DeAndre ‘Dree Gholston. All three are plus defenders, long and athletic, with strong lateral quickness and agility. Hodge and Gomillion each won Defensive Player of the Year Awards in their conference the past 2 seasons. Playing under Chef Gates himself.

If the additions of these three mean Mizzou can simply get to average defensively, Mizzou could give up 3 percent fewer points per possession, or about 2 points fewer per game playing at an average pace.

This one isn’t hard. Missouri was one of the absolute worst 3pt shooting teams last season:

Even if the team still only took 18 threes a game but made 6 of them, instead of taking 21 and making 7, that’s worth an extra 3 points/game.

Once again, enter Sean East. As a solid true PG, he actually shot more than 40% from 3 point land and would completely change the role of other players on the team, such as Boogie Coleman. Free from ball-handling responsibilities, Boogie can focus on catch-and-shoot situations and being a 3 pt specialist. With Hodge & Gomillion eating up tough defensive assignments, he could also be free from being exposed defensively and more rested on the offensive end. It’s not much of a squint to see these changes pushing Boogie back to the 36% 3pt shooting percentage he carried before joining Mizzou. Add Diarra’s 3pt shooting, and all of a sudden, Mizzou is a competent to average 3 pt shooting team.

All told, simply from better PG play and modest improvements in defense and 3pt shooting, Mizzou should be a dramatically better team next season.

A 10-point swing to +3.8 points/game would move the Tigers up 200+ spots to 90th in the country… just below Dennis Gates’ Cleveland State team that won its conference. ;) 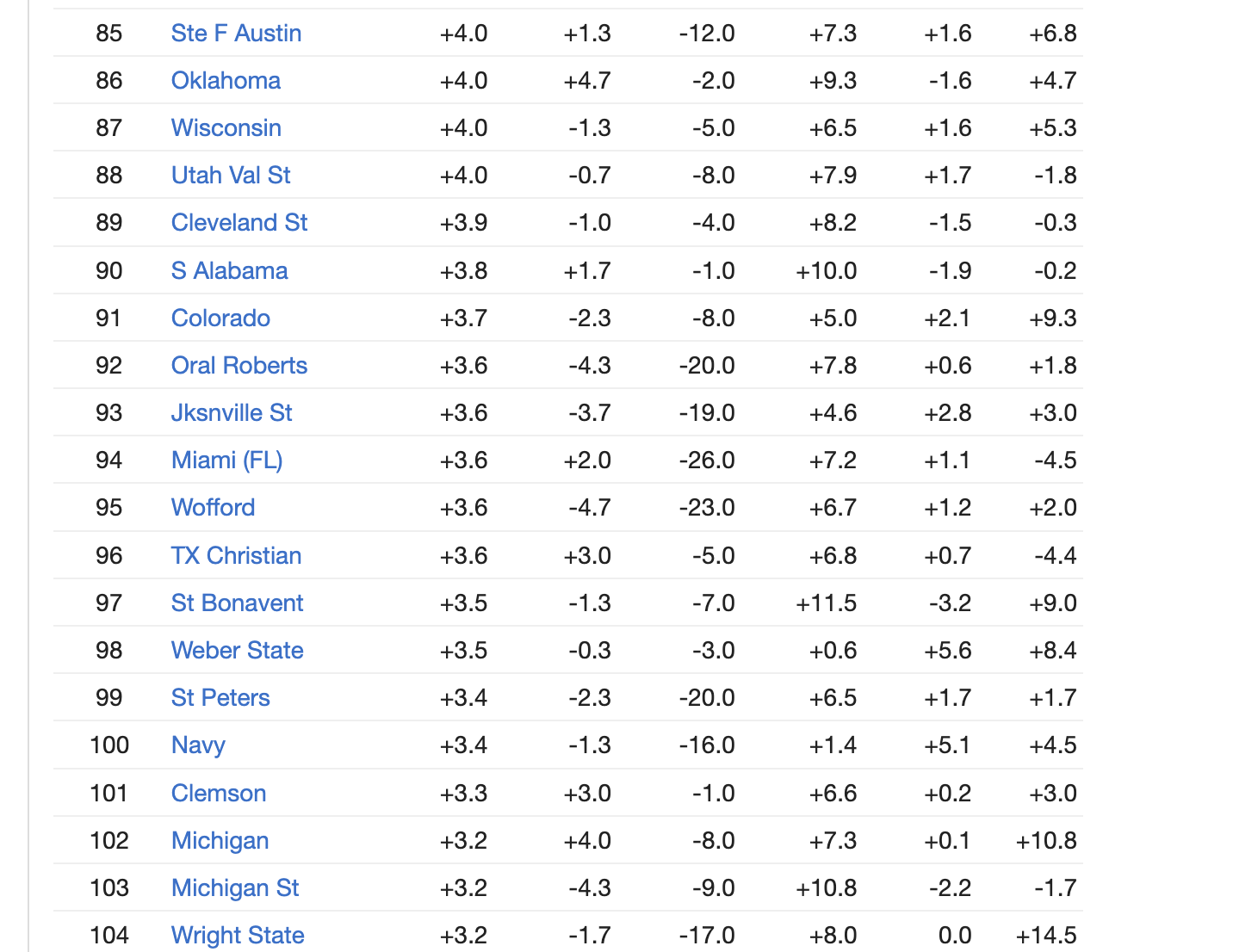 NCAA tourney teams Wisconsin, Colorado, Michigan, Miami, Michigan St. and St. Peter’s all reside in this neighborhood. That’s good enough to make the tournament and make a run vs. the right matchups in year 1 of the Let Dennis Cook era. What’s not to like about that?