Share All sharing options for: Looking ahead in 2016 and what we all want to see from the Missouri Tigers

January of 2015 feels like an eon ago when you're discussing Missouri basketball. My first article of the year was a preview of a game Missouri won, against the Lipscomb Bison. Since then, not a lot of things went right for the Tigers, and head coach Kim Anderson. As we move into 2016, a lot lies ahead for the rebuilding Missouri Tigers. The next few months are vitally important for the tenure of Kim Anderson. He's got to get this team, with this current roster moving in a positive direction. He's has to win back fans, and the most important thing he's got to do is increase the level of competitiveness on a nightly basis.

If projections hold, Missouri is only picked to be favored in two more games, and has a projection of four conference wins. 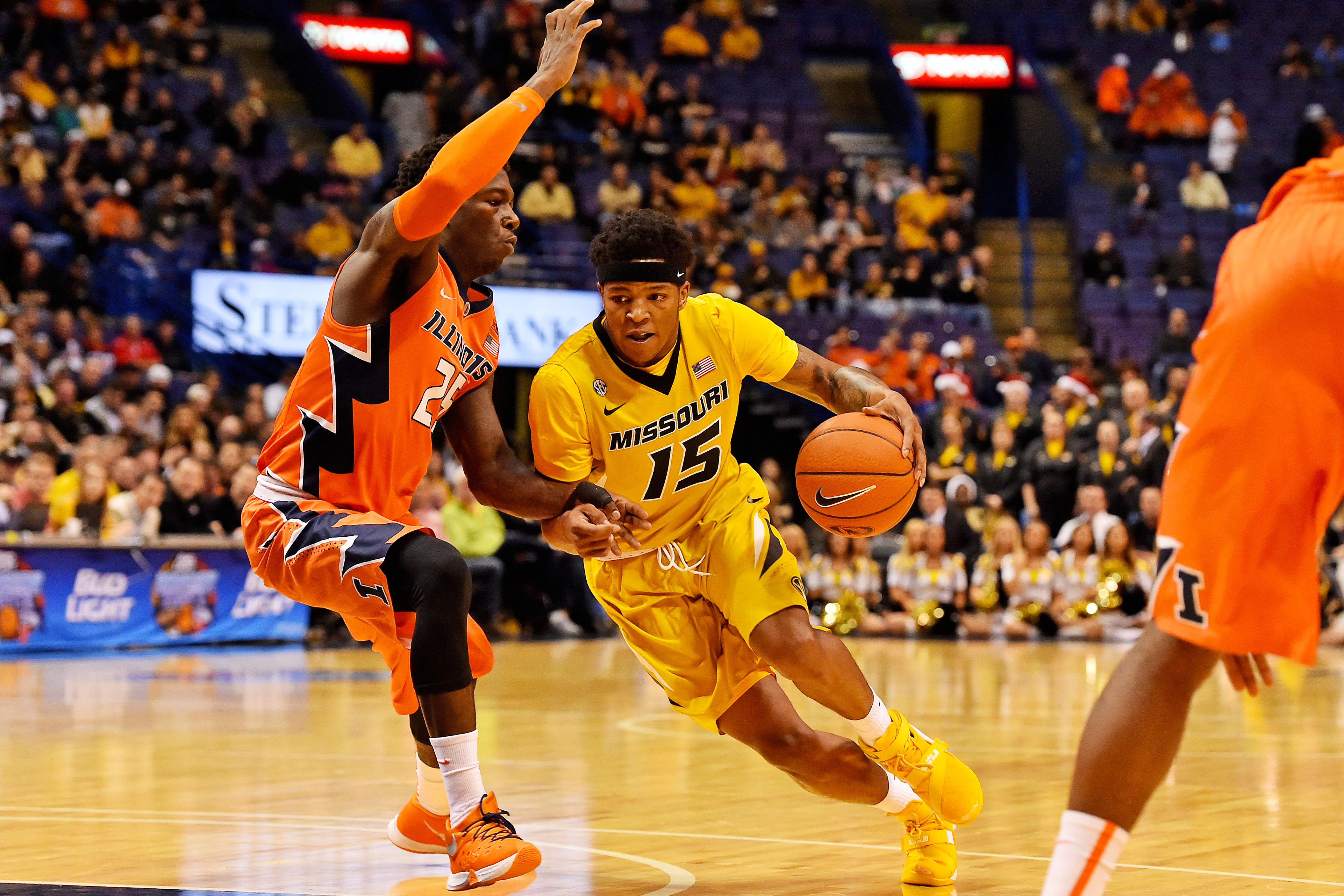 With youth and inexperience reigning supreme, the Tigers are left with three upperclassmen and two of those aren't in a position of leadership. Wes Clark showed his ability to be the guy in his last three games. It wasn't his shot making, although it always helps, but his level of competitiveness shined. The Tigers need Clark to step up and take ownership of the season and the direction of this program. The freshmen and sophomore classes have the talent to help boost the program back up to respectability, but Clark has to be the guy to steer the rudder.

Namon Wright is averaging the third most minutes on the team, he's done a good job of getting to the line, but he's got to do two things much better from here on out. He needs to start making jump shots, and defending better. His FTRate is nationally ranked (a good thing), and his five rebounds per game is tops on the team. The problem is he's shooting the worst FG% on the team, and his 3P% is under 30% as well. Wright has to step up and take some of the scoring pressure off of Puryear and Clark.

The other sophomore playing a lot of minutes, Jakeenan Gant has made strides, over his last 7 games he's averaging over 18.7 minutes and averaging 7.5 ppg and 5.4 rpg, I'd like to see his production increase. Closer to 21-22 mpg, 10 ppg, and 6+ rpg would be ideal. We've seen Gant more aggressive on the glass, which is a big positive, but he's got to get more aggressive in attacking the rim. He too often settles for a shot going away from the rim instead of towars it, and with his ability to knock down free throws, this should be a given. Oh yeah, he also needs to improve on defense. Gant has been adept at blocking shots throughout his career, but it's time to improve on the ball. Productive improvement from both Gant and Wright, along with more consistent shooting from Clark, will alleviate the pressure on the freshmen to produce on a nightly basis.

If those things happen, I think...

I realize there are many who are angry with the way things have played out. Frankly, if you're a passionate fan you should be. I also don't believe Coach Anderson is too happy about it either. Last season was dreadful to sit through for all parties involved, and season two hasn't been great to date either.

I don't consider this a blanket statement of support for the head coach. If Mizzou heads down the same path as last year, looking terrible for most of SEC play and struggling to win three games, I would find it hard for the AD to bring him back. I say this because I would prefer us not have to go down that path. I've already had to write about one dark winter, I don't look forward to doing it again. I'd like to see Kim Anderson keep his job by starting to turn this ship around. I want to see him keep his job by earning it over the next two months. He doesn't have to fully restore the roar, he just has to get this young roster to show competitiveness, and progress. Fans will get a lot more patient if he returns the competitiveness. It will be important for Mizzou to finish higher than the mid-160's in KenPom. I think top 125 is on the table, and achievable. You get into the top 125 by simply being more efficient on both ends of the floor against better competition. No more blowouts and efficiency on both ends of the floor is what would earn a third year.

Get a scoring guard in the spring

The three members of the 2016 class all have nice potential, but Mizzou's biggest area of need is a guy who can score. I like the recruiting of Eron Gordon and DeShawn Corprew, as those two are scorers. I'm not sure who might transfer out at the end of the year, but safe money says somebody does. With the two bigs coming in, Mizzou has the size. Willie Jackson has a high ceiling but needs some offensive refinement. They need a polished scorer. If options aren't available to bring in a high school scorer, there should be some Junior College options available. If more than one spot opens up, I would like to see Mizzou sit on the scholarship, unless a transfer or another player you can't turn down falls in your lap.

If the above happens, you're going into the summer with two would-be seniors, up to four would-be juniors, four would be sophomores and three or four freshmen. Of those players, only four would be newcomers. Which would be the fewest since Mike Anderson bolted in 2011 when Frank Haith didn't have time to put together a recruiting class, and ended up being a class of two summer transfers and a december transfer.

Mizzou would have... continuity. *gasp*

For those who paid attention to twitter last night, Kim English took exception with my characterization of stats by talking about the roster turnover without context. So I'll just leave this here because it's fun:

Something pretty amazing, Mizzou has had roster turnover of 46% or higher every year since Haith took over, with 2 years of 61% turnover

Click and follow the conversation. I enjoyed it. But my point was never about Frank Haith. It was about the program in general, which hasn't been able to get talent to stick. Whether it was Mike Dixon, Shane Rector, Negus Webster-Chan, Torren Jones, Stefan Jankovic, Montaque Gill-Caesar or Johnathan Williams III, Mizzou's roster would be a lot better and a lot deeper if they weren't dealing with so much turnover, and had a few of these players still around. I understand some of those guys are gone for a reason, but I also think losing Teki and J3 were big losses from a talent and continuity standpoint for this years team, one which caused their growth to be stunted.

So the potential of only having three or four new faces would be a good thing.

Have a quiet, and loud summer and fall

Quiet from a 'news from the team' standpoint. I would like there to be very little drama, no arrests, nobody in threat of suspension or getting kicked off. Easy enough?

Loud from a recruiting standpoint. I've been told if Mizzou can show improvement the rest of the season, they will find themselves in the middle of the heat for Michael Porter, Jr. MPJ currently has a top 10, it's expected before the summer he'll cut it to 5 (or less), and Mizzou will be on the list. If Mizzou performs well enough the rest of the season, they could find themselves amongst the top 2 and potentially land the elite 5-star player. It would be great if Mizzou would land Porter, but even if they fall short they need to have a good recruiting class. Porter, Trae Young and Jeremiah Tilmon are the top three targets, but there are a lot of players out there with scholarship offers. If the Tigers can show they have a path forward by the end of this season you could start to see them land a higher caliber of talent. Which would increase the ceiling of this team drastically.

We don't yet know the full schedule for the fall of 2016, in fact we don't know much of what the schedule is. Missouri needs to win around 10 games in the non-conference slate. I know there is a home game against Arizona which should provide a barometer of where this team is in for Kim Anderson's third season. Mizzou needs to be competitive as Arizona is a legitimate top 25 program, and Missouri should be a program who can beat those teams. If the goal is to finish inside the top 125 of the KenPom rankings by the end of this year, next years goal should be a top 80 team before the start of conference play. If they're inside the top 80 in the SEC they should have a .500 record, and a move up inside the top 70 by the end of the 2017 season is in reach.

If you have sophomores and juniors who are strong and aggressive, along with a matured leader in Wes Clark as a senior, Missouri could position themselves fairly well for a solid start to 2016. It's imperative Kim Anderson start to put these pieces together and start to bring fans back into the fold.

So essentially I'm willing to continue to be patient to a degree. Kim Anderson has started to establish some continuity and I tend to think continuity will help this program long term. If three or more players transfer this offseason, this could all be thrown out the window, but these are a strict set of guidelines to what I'm looking for from the Missouri Tigers in 2016.