The 1960s were Missouri's best defensive decade, but the 2010s are catching up quickly

Missouri is in the middle of a defensive renaissance.

Share All sharing options for: The 1960s were Missouri's best defensive decade, but the 2010s are catching up quickly

A majority of Gary Pinkel's tenure as Missouri's head coach was defined by the Tigers' offensive star power. Brad Smith was the first face of Pinkel's Mizzou, and Chase Daniel not only succeeded Smith, but one-upped him. Daniel threw to Jeremy Maclin and Chase Coffman and Martin Rucker and Danario Alexander and Will Franklin, and he handed to Tony Temple, and per my estimated S&P+ figures, Mizzou's 2007-08 offenses were the best in school history.

The star power only slightly abated after Daniel left. Alexander put together the most ridiculous individual season ever in 2009, Blaine Gabbert was a top-10 pick in 2011, and James Franklin had Henry Josey, Dorial Green-Beckham, L'Damian Washington, Marcus Murphy, etc., at his disposal during 2013's run to the doorstep of the BCS title game.

Over the last five years of the Pinkel era, though, the advantage shifted to the defensive side of the ball. After struggling to do much with the players he inherited from Larry Smith, Pinkel and his assistants methodically went about building a devastating attack.

Mizzou is in the middle of a defensive renaissance of sorts, and at first glance, with the personnel Barry Odom inherits (sort of) as head coach and the staff he has put in place, that might not abate any time soon.

But the 2010s still have a ways to go to catch the defensive dominance of Missouri's 1960s squads.

Here's a ranking of Missouri's defenses, again in order of national percentile. Pinkel teams are in bold.

That the best defense in Missouri history played on an 8-4 squad might seem weird if we hadn't just experienced the 2015 season, in which a dominant defense was dragged down by a woeful offense. Mizzou scored only 219 points in 1973 and averaged just 13 points per game in Big 8 play. But the Tigers indeed won eight games because of a defense that only once allowed more than 17 points in a game. (And allowing 31 points to 10-0-1 Oklahoma was impressive in its own right.) Mizzou beat nine-win Nebraska, 13-12, and held Auburn to 17 points in a 17-point Sun Bowl win.

You know the 1973 defense must have been good to grade out ahead of Dan Devine's most dominant units. Devine teams occupy five of the top seven spots here and nine of the top 14. The dude knew how to recruit for and organize a defense; in fact, the Tigers may have been able to make national title runs in 1961 and 1962 after the great 1960 season if not for offensive cratering.

Also noteworthy among this top-25 list: the 1998 unit was drastically underrated. We remember Corby Jones and Devin West, but the offense slowed down quite a bit when Jones suffered turf toe that year. Mizzou's run to 8-4 (the Tigers' best record in 15 years) ended up powered just as much by a defense that allowed six points to Oklahoma, 14 to Colorado, 17 to eventual Big 12 champion Texas A&M, and 20 to Nebraska.

A moment of silence for Brian Smith. The senior defensive end was not only putting together a ridiculous senior season in 2006 -- in eight games, he finished with 9.5 tackles for loss, 7.5 sacks, 11 QB hurries, and five pass breakups -- but he was giving a surging defense an identity.

Going by my week-to-week ratings, Missouri ranked ninth in Def. S&P+ seven weeks into the 2006 season; the Tigers had allowed just 10 points per game through five games and held both Texas Tech and Texas A&M under 30. But when Smith broke his hip against Kansas State, the defense fell apart. Thanks to the fading defense and an offense that was losing basically every receiver to injury, Missouri dropped three in a row after the Kansas State win and finished just 8-5. The defense, so promising at the midway point, ended up 38th.

If losing one player can make that much of a difference, maybe your D was a bit of a house of cards to begin with. Still, not only did Smith's senior season end early, but Mizzou's also did in a way. 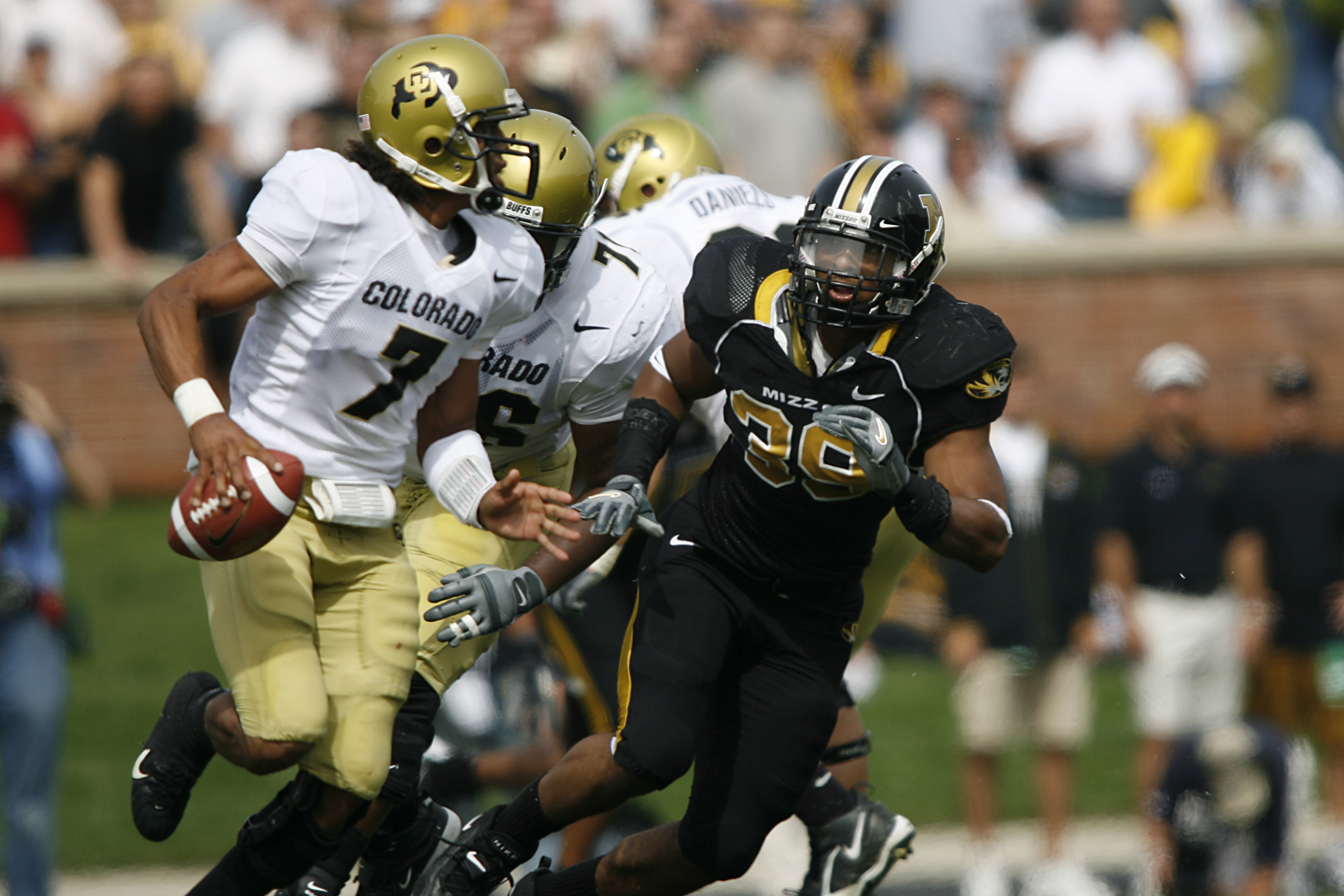 Ah, 2008. William Moore got hurt in the first game of the season and limped through most of the rest of the year, and Mizzou just didn't have the secondary to cope with a patently absurd set of offenses on the schedule. Illinois scored 42 points, Texas scored 56, Baylor (with a freshman Robert Griffin) scored 28, Kansas scored 40, and Oklahoma scored 62.

There were some decent moments -- Nevada, with a young Colin Kaepernick, managed only 17 points, Nebraska scored 17, and Oklahoma State scored only 28 -- but Mizzou managed to lose two games while scoring 31 or more points, and it put a damper on what was supposed to be an amazing season. And then the D got even worse in 2009. But then the rebound began.

Aside from the 1998 season, Larry Smith just couldn't get the defensive side of the ball figured out. He inherited a mediocre defense (58th in 1993) and ranked 63rd, 67th, 84th, and 82nd in the proceeding four seasons. After surging to ninth in 1998 (that defense, honestly, likely benefited from Missouri's strong ball-control O), the Tigers fell back to 76th and 77th in his final two seasons, and when the offense also collapsed, Smith was quickly done in.

And speaking of being done in ... remember how well Warren Powers' 1984 offense graded out in the offensive ratings piece (17th in Off. S&P+, 15th in Missouri history)? And remember how Mizzou still managed go 3-7-1 and get Powers fired that year? Here's your culprit.

A year after putting a dominant defense on the field, Mizzou and its rejiggered unit just couldn't figure things out. The Tigers allowed 30-plus points seven times, ranked 89th in the country, and ranked 107th in Mizzou history. At the time, this was the worst Mizzou D since the 1950s. (It was quickly joined by the 1985 and 1991 units.)