We bid farewell to the second defection from the 2015-16 roster, D'Angelo Allen.

There isn't a lot to say about D'Angelo Allen. He transferred (or is transferring) for a reason. Allen was a prototypical tweener in that he wasn't big enough to make an impact at post, and wasn't fast or quick enough to handle wing responsibilities. In the end he lost out on his playing time to the more reliable scoring threat in Kevin Puryear, and only found action in 21 of the 31 games Missouri played. Needless to say, the writing was on the wall for this one. His minutes were more than cut in half, 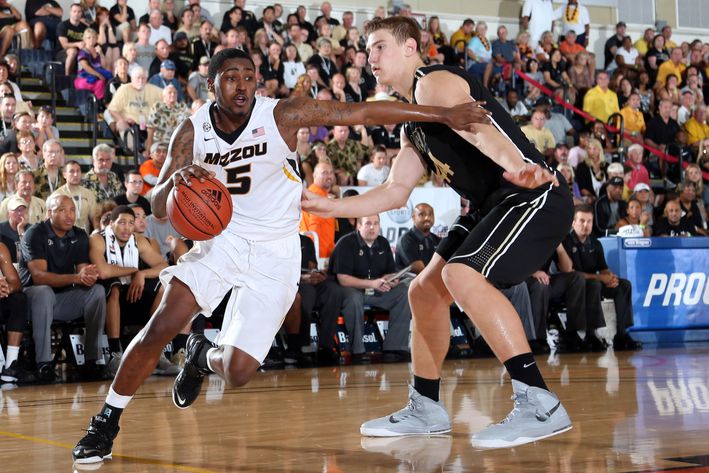 D'Angelo is a fun player that appears to be trapped between two worlds. Not big enough to bang but potential not mobile enough to play on the wing. We saw flashes of a sweet shooting touch last year, so hopefully D'Angelo has worked on his shot and moving with the ball towards the basket.
Combo Forward Player Previews - RockMNation.com

So when the news broke that Allen planned on transferring there was more of a collective shrug, because it was to be expected. He seems to struggle to consistently get on the floor, and when he was on the floor he seemed to either do a few good things or a lot of bad things, often playing out of control. Allen played a little more on the wing in high school, and it sounds like envisioned himself more as a wing, but didn't seem athletic enough to defense wings in the SEC, which is why he found himself subbing in more for post players. He was good enough to start a year ago, but his goal was to play more on the wing this season as he lost weight and slimmed down, and the minutes fell away.

Opportunity is something that you get daily in practice. Perhaps this is something lost on some guys, so it perhaps wasn't a good fit to begin with. One thing we do know is that Kim Anderson is trying to change the culture at Missouri to fit himself and his approach better. If Allen wasn't winning battles in practice he probably wasn't going to play ahead of those that did.

The story goes that Allen had set up a visit to Missouri before Anderson even had accepted the job. Always an eccentric personality, Allen was able to capture fans interest with his less than routine plays made with flair, and his enthusiasm for the game shone through with the way he played. However that wasn't enough to carry him into more minutes, as Anderson and his staff were looking for a bit more skill and less flash. But the sheer joy and enthusiasm that Allen brought to the game will certainly be missed.

So tip your cap, and thank D'Angelo Allen for his time and effort while he was a Tiger, and wish him well on his future endeavors.

Best of luck, D'Angelo, but taking shots at Puryear on your way out the door isn't going to win you any favors.  I liked D'Angelo's enthusiasm on the court and on the bench, but what we saw of him this year indicated the same problems he had last year: his tweener size (which he can't do anything about) and his inability to contribute on offense (which he certainly could have done something about).  I suspect that, if he'd spent some time refining his jump shot and practicing hitting layups in traffic, the coaches would have found a way to get him out there, but Puryear's a better player and Gant's ceiling is probably higher than anyone else on the roster.  I never saw anything out of D'Angelo to make me think he needed more minutes than he was getting.  All I ever saw him bring to the table was likability, and his sniping at KP did a nice job eliminating that.  I don't bear him any ill will, but I'm not particularly sorry he won't be using a scholarship next year.

D'Angelo Allen, Kim Anderson's first official recruit is now gone and in his two years he did not see the court nearly as much as he'd hoped. It appears that he simply was passed over due to his inability to find a comfortable spot on the court and with the coaching staff. We saw flashes last year of what he could be as a stretch four (thinking back to South Carolina), but unfortunately for DA that was not the role this coaching staff wanted him to play, preferring he use his size to play more down low. Like with Wes Clark DA will probably be remembered for tweeting in the direction of Kevin Puryear and therefore viewed in a harsh light that is unfair. DA was a high energy guy that seemed like a great teammate that just ended up choosing the wrong school. I look forward to seeing how he turns out and hope he can blow up at another school a la Jankovic this year at Hawaii.

Never tweet. You know who doesn't tweet? Players who see the floor. That's because phones are not allowed on the court during play, per the NCAA. Will that change in the future? It's impossible to know fur sure. What we do know, is that D'Angelo Allen will no longer be a Missouri Tiger. I'm sad to see him go. He was an intriguing talent, though on that never quite realized its potential. Whether that be because of his effort or because of his fit on the team is really of no matter. He's gone. I did enjoy the "If I'm going down, I'm taking all of you S.O.B.'s with me" attitude he adopted after announcing that he would be transferring. Leaving a program is never fun, so I was happy to see him at least make it entertaining for the rest of us. Good on you. D'Angelo. Now, please, stop tweeting.