We bid adieu to TI as he takes his swag on down the road...

When news came out that Tramaine (TI) was leaving the Mizzou program, no one seemed surprised, not even a little. At the conclusion of Kim Anderson's first season there was talk that there would be an exodus and that the individual leading that charge would be TI. At this point we all know the story of his freshman year, suspended for multiple games due to a personality conflict with Kim Anderson and a perceived lack of respect for the rest of the coaching staff that manifested itself in practice. That all being said, TI did return for his sophomore season, but like season 1 there were suspensions, and limited playing time behind Terrence Phillips, Wes Clark, KJ Walton and even Jimmy Barton at times. 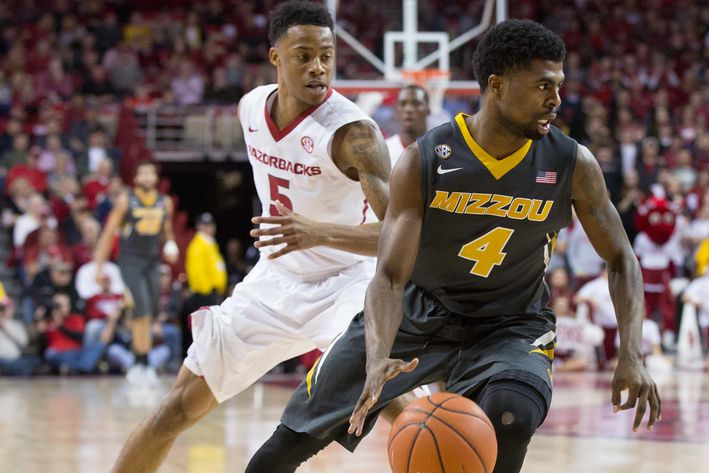 Based on usage in the exhibition game, I think the staff’s initial rankings at this spot went Clark - Payne - Isabell. After the game, I have to think that Isabell is going to spend most of his time backing up Phillips at the 1, which leaves Clark and Payne. as the primary 2 guards, as well as K.J. Walton, who sits somewhere between the 2 and 3 positions.
Combo Guard Player Previews - RockMNation.com

Looking at the numbers you can see progression in TI's game in about the same minutes per game really only regressing in his three point shooting (though who on this team didn't) and assists per game, which with Phillips running the point primarily was not a surprise either. However, TI did not progress as well in certain fundamental areas that you'd have hoped he would. He was still careless with the ball at times, and would make at least one or two plays that defied explanation.

On the defensive side of things, he had some trouble keeping his man in front of him, and had a tendency to get a little handsy, thus resulting in fouls on the perimeter that you'd rather not see. While these are the negatives of his sophomore season, they mirror pretty well the evolution of the now departed Wes Clark. The errors in TI's game all appear fixable and should no longer be an issue with growth and understanding of the game at the collegiate level. For him, having a year in the gym in an environment that is more supportive of him should do wonders for his game.

But enough with the negativity, TI showed flashes of the dynamic off ball guard that we'd hoped would have been more consistent this season. If you needed someone to drive to the paint and try to make something happen when the rest of the team kind of hung around the perimeter, he was the guy. If you wanted someone to whip a slick pass to a streaking big at the basket, again, that was TI's game.

Once Wes Clark left/was dismissed TI stepped right into Wes role and had himself the best run in his time at Mizzou, scoring in double figures against South Carolina, Ole Miss and A&M, while showing out well at Arkansas. At the conclusion of the A&M game you could see the type of player TI is, he was scoring, passionate, acting as a leader on the floor and generally being the type of player we'd hope to see all season. Then something happened between the LSU game and the Florida finale because in the final game TI got less than five minutes of playing time and that was that.

Clearly, something went down and at that point it appeared the writing was on the wall. KA and TI never seemed to mesh, and of all the players on this squad probably received the most ire of the fanbase. But make no mistake, Mizzou is going to miss the type of player TI is, because every team needs a guy like TI. A player with attitude, confidence and just a little bit of swag, which TI has in bunches. All great teams have that type of player, the best Mizzou teams have as well and it's a shame we won't get to see Tramaine develop at Mizzou because looking down the bench, I don't see anyone that fills that role. I've always been a fan of his game and look forward to seeing what he can do at his next stop, and I'm sure that in two years we'll be wondering what could have been. I'll close this out with TI's note that he posted on Twitter, good luck Tramaine looking forward to seeing where you end up and how your game develops.

In terms of writing being on the wall, I think most think the writing was on the wall last year for Isabell. Before he became a Tiger, there was a lot to like about TI's game, he was a gritty playmaker who was one of the few players who you could toss the ball to and let him go make a play. Defensively he struggled, and he was prone to inconsistent effort at times, which I think led to his inconsistent minutes off the bench. For whatever reason, he and Kim Anderson were never able to quite get on the same page for Anderson to get what he wanted from Isabell.

I do think that Tramaine is a guy who can be a winning player on a winning team. But the question for him, moving forward, will be if he can find a situation where he trusts the coach and where the coach trusts him. I don't get the impression that was ever the situation for Isabell at Missouri. I think it will be interesting to watch Isabell's future going forward to see if he finds the right fit for him. I hope he does.

Isabell was a player who I didn't expect much from this season. As Sam said, the writing was already on the wall. So much so, in fact, that TI's effort this season actually surpassed what I thought he would give the Tigers. Congrats, Tramaine. It takes a lot to succeed with so many behind-the-scenes distractions, and - at times - he did just that. I wish him the best of luck in his future endeavors. Hopefully he can find a situation that will allow his game to flourish like it never could in Columbia. TI, if you're reading this, my one piece of advice would be this: Live Your Life.