Some probably consider Namon Wright the surprise transfer this off season, but as the season wore on I became more suspecting Wright could be one of the premier defections once the season wrapped up. Everything lined up for Wright to find a new home once I started piecing the APR information together, and some rumors were going around talking about how Wright did indeed have his eyes elsewhere.

I don't blame him, it's been a tough few years, and Wright committed to a different Missouri program than it has become. He committed to play for Frank Haith and Mark Phelps, both of whom are with different programs now. And the program that Missouri has right now is one that is putting the pieces back together. 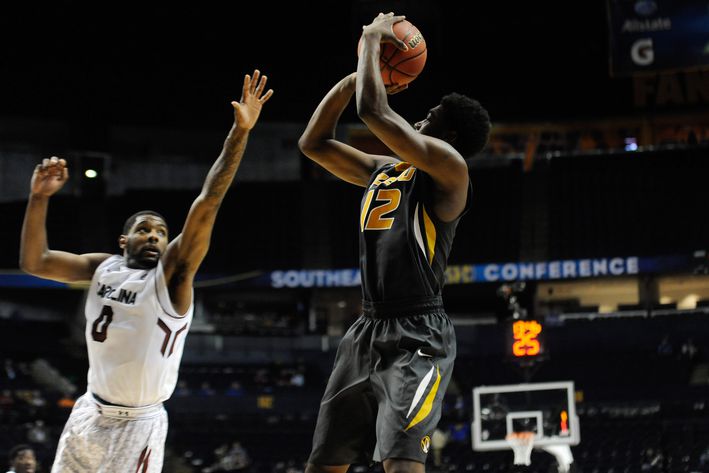 Namon starts at the 3 spot when he comes off suspension, but Walton and VanLeer are going to demand time, and if Allen's worked on his jump shot, he could push for minutes here, too. This is going to be a position to watch this year. My guess is that playing time will go Wright, Walton, and VanLeer, Allen, with Allen getting some minutes at the 4 and Walton playing some at the 2.

With that said, Namon appears to be a bit of a blow to the roster going into next season. Whoever the Tigers replace him with will be younger and less experienced. Experience has been a problem over the last two seasons, so losing an experienced hand isn't easy. On top of his experience, Wright had made great strides to improve his all around game this season and looked to be on a good path for continued improvement. He bettered his rebounding, passing and ball handling, but his percentages bottomed out in the shooting categories.

So what went wrong? Namon has a bit of a hitch in his shot, so when things are 100% inline, he's usually offline. Wright improved down the stretch, but it wasn't enough to get him in the neighborhood of his shooting from last season. He did drastically improve his Free Throw shooting, but I think that was largely because he went to the line more, and the 75-80% is probably closer to his normal FT% than the 55% he shot last season.

In moving on, Wright has decided that he'd like to be apart of a more competitive program, and the staff seems okay with the move. It's not that Wright isn't a good player, or wasn't a good student or person to deal with. I think the staff feels that they can get somebody in who can equal the production, and be more in tune with the what Kim Anderson is trying to build. With only one remaining player from the Frank Haith era. A lot of people like to look a the 2015 class as not really a Kim Anderson class, but as a combination Haith and Fuller class... fair or not. And at this point, Jakeenan Gant is the only player left from the '15 class remaining. Which means that the transformation from this basketball program from Frank Haith to Kim Anderson is nearly complete.

I had heard things suggesting that Namon was on his way out, but it was still disappointing when the word came down.  He improved the most of any of the sophomores in KA's time here, and the way his all-around game developed was really impressive.  That a guard was our leading rebounder is both a testament to the limitations of our frontcourt and Namon's will to go get the ball.  Once his shot started falling down the stretch, it was easy to see the high-level player we all hoped he'd become.  Replacing him won't be easy.

At this point, no one should be shocked by any player leaving the Mizzou basketball program, once JW3 moved on, all bets were off. But losing Namon is a blow, probably deeper than any departure so far this offseason. Namon was the team’s leading minutes getter, third in scoring and their leading rebounder, from the wing. While his shot did fail him for most of the season, he did get to the free throw line quite a bit and played in every game this season. I don’t care who KA brings in, they’re not going to be able to duplicate what Namon provided this season. As was the case with Wes, D’Angelo and TI, I wish Namon nothing but the best and hope he can land on a winning team potentially closer to home, and hope beyond hope for Mizzou’s sake that someone can fill his spot.