Never in all my time as a Mizzou fan (dating ALL the way back to 1996) have I ever seen an incoming player so fall in love with all aspects of his school as I saw with freshman Terrance Phillips. The minute he committed he engaged the fans, the other teams on campus and pretty much was all Mizzou all the time all over his Twitter feed. As a result, fans fell in love with him, immediately and that love continues. During the period between his signing and game one the speculation was about whether he would be tabbed to start immediately at the point or if he would get some time to acclimate himself to the speed and challenges of the college game, and as was the case in every game this past season, he did start. 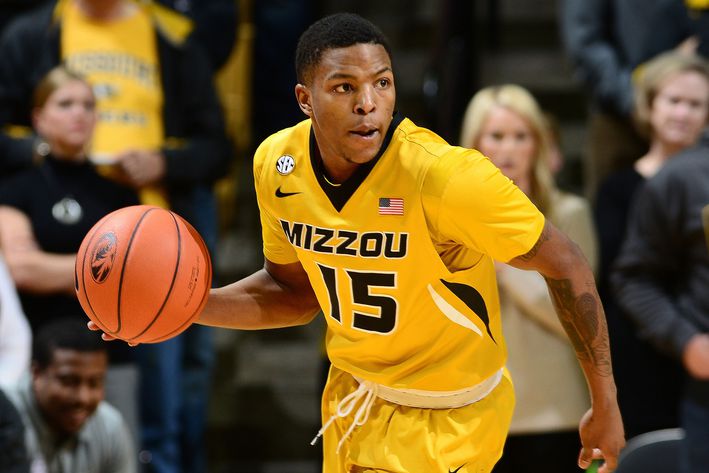 This year, it looks like KA will have what he needs to run his offense. He's got a straight, pass first point guard in Phillips, a sophomore who seems to have really bought in in TI, an experienced vet looking to take on more of a leadership role in Clark and an experienced off guard in Payne.

Running the show on power 5 college basketball team is difficult and demanding for any player, regardless of class and with few exceptions there will be growing pains, and this was the case for TP. Not since Phil Pressey has Mizzou started a true freshman at point guard, but that's exactly what Kim Anderson had Terrence Phillips do this year.

This year TP did exactly what was asked of him, he came in as a pass first, shoot second point guard and he did everything in his power to get his teammates involved on the offensive end, and considering the shooting troubles the team on the whole had, he showed out very well in his assist percentage. TP, meanwhile also showed some nice shooting touch when he was called upon to do so, and as stated above, there were times when his shot was needed.  He made just under 50% of his shots and right around a third of his three point attempts, which as a freshman is commendable. If you were going to have one memory of TP this season, we can point to the resolve he showed in the Northwestern game in Kansas City in late November. In what would become a trend, Mizzou got down big early, but instead of packing it in (as they had the night before against K-State) Terrence Phillps brought Mizzou all the way back into the game, and were it not for foul trouble (more on that in a sec) he very well could have brought Mizzou all the way back, and who knows what becomes of Mizzou's season at that point (probably still not great, but you never know)?

Like all freshman point guards (again aside from the true prodigies) TP's one big issue was that he couldn't keep his hands off of the other team. Because of the speed of the game and the quickness of his opponents TP would tend to get into foul trouble, and went a few games where he'd pick up some ticky tack fouls that would cause him to have to adjust his game which would invariably allow the other team to put points on the board. This is not uncommon in the least, Wes Clark went through it his freshman year and TI did as well, it's part of the process. If there's one thing he needs to work on this offseason it would be managing to keep his man in front of him and defended without all the touching. This tendency also was a result of TP getting perhaps too many minutes this season. It was clear that KA did not trust anyone out there to run the show besides TP and as a result, he probably played more than he should have and with the departure of Wes Clark and TI, that's not going to change anytime soon.

What can we expect in year two? I think a lot of what we saw in year one, because as of now, TP is the only ball handler on this team. Kim Anderson decided when Terrence Phillips got on campus he was going to be this team's leader and said as much numerous times, and the team at this point is his, as all the other potential leaders are now gone.

TP should be here for another three years, and his growth should be fun to watch, hopefully he gets some help this offseason in the form of another ball handler and at no point falls off his "hover board."

There's been a lot of controversy among Mizzou basketball fans this year, but the one thing I think we can all agree on is that we love Terrence Phillips.  He's a great leader, a great personality, and looks like the real deal running the point guard position.  His limitations this year were what you'd expect from a freshman - he tried to play just a little too fast at times, and it led to foul trouble - and from a relatively undersized player.  But I think I speak for everyone when I say that when TP started jumping over benches in Mizzou Arena chasing after loose balls, he jumped right into our collective heart.  I hope the rest of the team looks better for the rest of his Tiger career than it did for his first year.

Oh, also, his volleyball spike assist to Ryan Rosburg is one of the funniest plays I've seen in a while.

Terrence turned out to be a much better shooter than I anticipated, I imagine that his shooting percentages can climb next season if he's able to take even fewer shots, which is again been a problem for point guards on this team the last few years. Phillips more natural role is one of distributor, as evidenced by his time at Oak Hill and being the career assist leader. Leadership and assists is what we'd like to see, and what we have seen in spurts, but the number of shots at times were a lot to ask from a freshman point guard. If Phillips can add muscle in the offseason, and continue to work on his shooting percentages, all while cutting down on his turnovers, I think you'll see a special player during the rest of his tenure at Missouri.