Missouri tried an influx of players from the JUCO level to provide a spark, so how did Woods impact the Tigers last year?

When you win 10 games, there's usually a long list of things that are disappointing during that season. One of the items atop the list, was the production from Russell Woods. Woods came to Missouri from John A Logan College in Illinois with teammate Martavian Payne, and neither made the impact many had hoped once they signed. At least Woods lasted the season and played, Payne left the team before the season started, and is now at Graceland College in Iowa. Woods on the other hand, stuck things out and seemed to be rounding into some sort of shape late in 2015, before basically becoming ineffective after conference play started.

There were a lot of reasons for skepticism on Woods coming in, he played on a high school team with Jabari Parker, so he was given maximum exposure, and wasn't highly sought after even after two years of qualifying at the JUCO level. Woods was advertised as a good post defender, and a block-to-block player, meaning that he wasn't much for stepping out beyond 5-6 feet. As you can see from his shot chart. I honestly don't remember Woods ever shooting as far away as is shown in the chart, and there's a reason why... he's not a good shooter. Woods 38.7% shooting from the free throw line is evidence of those issues. 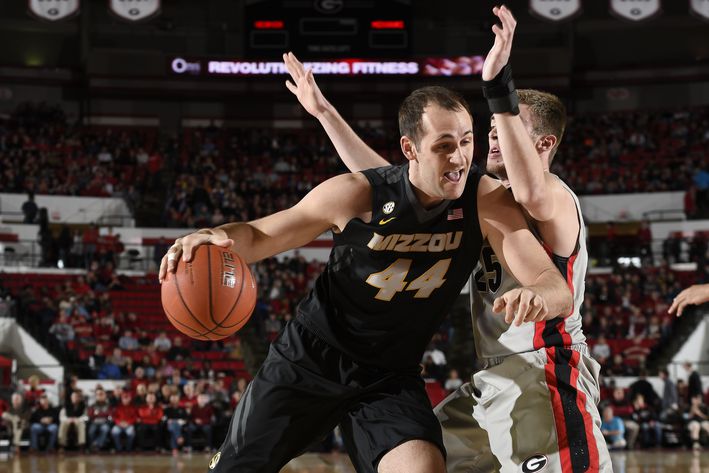 I really liked what I saw from Russell Woods in the exhibition. Woods is a guy that I've been trying to get a read on but haven't heard that much positives. So for him to show up, convert baskets and rebound is a big gainer for the Tigers inside.

Despite, skepticism, there were also reasons to be positive on Woods. Missouri wasn't going to ask him to do much. He just needed to step in and rebound, convert around the rim when given an opportunity, and basically be a replacement level player. And Woods provided a lot of those things early on, and even pushed past those expectations late in the non-conference slate. He played a season high 24 minutes again Illinois in the Braggin' Rights Game, and provided solid play with 10 rebounds against the Illini soft interior players. At the time, it appeared as though Woods was finding his footing. He was playing consistently, and had even moved into the starting lineup. At the time Mizzou fans were right to be hopeful that this Woods would carry through the SEC season, just by providing solid minutes, rebounding and being good around the basket.

Yet once Woods ran into the higher level of athleticism and length that exists in the SEC, he became nearly invisible. He was held scoreless nine times, missed two games, and never scored more than 3 points in any contest. The area where he needed to make the biggest impact, in rebounding, he hit the four rebound mark only once, went without a rebound four times, and grabbed only a single rebound in four other games. Add in his two missed games and you have only eight games where he grabbed more than one rebound against SEC competition.

So needless to say Woods second half of the season was far from what was hoped for him. If Woods expects to make contributions next season, he's going to have to overcome a relative lack of athleticism and find a way to better position himself around the rim for putbacks and rebounds. If Woods can work himself into a position where he's betting 12-15 minutes and providing six points and five boards, he can be the kind of effective player inside that Missouri will need next year. There's a serious lack of experience up front, and Woods will be the only senior, so let's hope something clicks this offseason, because the Tigers could use him to be that kind of guy.

The thing that baffles me about Russell Woods is that he looked plenty athletic early on.  He never looked like a Laurence Bowers pogo stick type player, but...well, he looked a lot more athletic than Ryan Rosburg, anyway.  I was pretty impressed with him in the early going of noncon, and then he just vanished.  I'd like to hope that there was some kind of undisclosed injury limiting his play and that's why he was such a nonfactor in SEC play...but I don't know.  Here's hoping he turns it around this offseason, because we need all the help up front we can get.

I'll be honest, by the end of January I had almost completely forgotten that Woods was even on the team, that's how little he impacted the games to me. But with this team being small again with the departure of Rosburg, Woods has an opportunity next year to do somethings. Whether he can or not remains to be seen, 'cause the SEC is a big man's conference and if Mizzou is to have any chance of actually improving next year, it's going to have to get some consistent production out of players like Woods. At this point I would take a Post type season, frustrating with moments of production that makes us wonder what could be if he put it all together all season. It's not great but it's better than wondering who that dude in the #25 jersey is.