First off, we obviously should acknowledge that an overall 15-16 season total for Rosburg doesn't tell the whole story.  For the first 3 2/3 seasons of Ryan's Mizzou career, he was...underwhelming.  He was a great character guy who stayed out of trouble and clearly loved Mizzou, but he was also forced into a much larger role than he seemed capable of handling.  As a result he became a lightning rod for angry fans, especially during Kim Anderson's disastrous first season.  Then, in January, Mizzou announced self-imposed sanctions for violations of NCAA rules, including a ban on postseason play, leaving Rosburg, in his final year, taking the brunt of the punishment.

Many players would have checked out, and you couldn't have blamed Ryan for doing so.  Not only did he not phone it in, he transformed.  Against Alabama on February 6th, he turned in a career high 17 points.  The following Wednesday, against Vanderbilt, he topped it with 24 points and 11 rebounds in his first career double-double.  He averaged 15 points and 5.4 rebounds down the stretch, numbers more in keeping with an All-SEC center than the useful cog most of us thought he was. 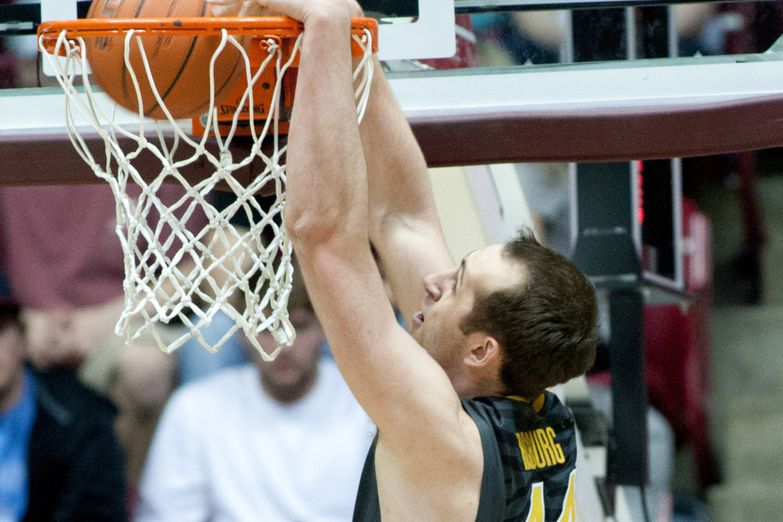 His athleticism is still limited, of course, but this year could be a nice little redemption story for him.  I hope it is, because he deserves to end on a high note after suffering through a brutal junior campaign.
Mizzou Basketball Position Previews: The Post Players

On a personal note, I'm glad I get to write this article about Rosburg; my staunch defense of Ryan in the preseason comment threads is what triggered Sam's decision to ask me to join the basketball masthead.  It took a while, but I'm glad to say that Ryan eventually proved my point; a guy who's limited in athleticism can still be an impact player if he knows how to use his size and strength to his advantage.  The end of season Ryan Rosburg figured out how to do that, and became the kind of post player you don't see much in college basketball anymore.  He couldn't jump over guys, but his outstanding footwork allowed him to develop moves, counter moves, and counter moves to his counter moves, and when he got past his yips at the free throw line to get to 65.7% shooting (not good, but serviceable), there you have it.

Rosburg has been the sole constant in perhaps the most tumultuous 4 years in Missouri basketball history.  As the only local member of Frank Haith's underwhelming 2012 recruiting class, some have speculated was offered just as a goodwill gesture to the St. Louis high school basketball community.  Whatever the reasons for his offer, he ended up the only 2012 recruit to stick out all 4 years at Mizzou (although Tony Criswell did exhaust his eligibility, sort of).

He suffered through a lot at Mizzou, and while he didn't get a storybook ending, thanks to the sanctions and the other problems with the team, he managed to put together a happy ending out of what was left for him here.  Good for you, Ryan Rosburg, and thanks for representing this university with class and consistency for your 4 years in the uniform.

First off, congrats to RR for completing four years at Mizzou, something that just is a bit passe at this point it seems. We all know the Rosburg story, for 3 and 2/3rds years he couldn’t find himself as a basketball player. He’d contribute in a sporadic fashion, throw down a big dunk and make people very excited, but then he’d miss a ton of free throws or become invisible and that would be that. Then all of sudden, Rosburg blew up and became a real life SEC basketball player that could contribute offensively and on the glass. It’s a nice ending to an up and down career at Mizzou, hopefully he had fun through all the trials and tribulation in his time at school. And here’s something I would never have thought I’d type, Mizzou is going to have a tough time filling his shoes and replacing the production he showed the second half of the season.

Rosburg's sudden offensive explosion late in his career was certainly surprising, and also a bit frustrating. I wish he's have been able to find that gear a few years ago when Mizzou needed an inside performance from anyone. What Rosburg did in the last half of his senior year was really kind of weird, but it was also really great to see. For a guy who was committed to Missouri basketball in a time when everybody else was transferring out to find success, even if it was just at the personal level. During his four years RyRos was a great ambassador for the university, never got in trouble, supported his teammates and show up to work day in and day out, and for some reason became a hot rod of a target for Missouri fans criticism. Its because of the weird criticism that I was also pleased to see Rosburg push past and answer the critics. If only he could come back for one more year.