A Game of Numbers: Florida

Finally, looking at the numbers from a win. Winning is fun.

Share All sharing options for: A Game of Numbers: Florida

A desperately needed shot in the arm.

I said last time around that I was running out of things to say about losses.  Thanks, Mizzou, for bailing me out on that one.  I would love to write about a win.  You know what would be even better?  Writing about more wins.  Let's do this.

One more thing, before I get into the meat of this.  It seems like beating Florida is how Mizzou gets its seasons righted lately.  During football season last fall, we were coming off a rough set of games - a just-barely win at USC sandwiched between a brutal loss to Indiana and an absolute annihilation at the hands of Georgia.  The offense was hurting, the season was in jeopardy, and the defense took it upon themselves to destroy Florida.  We went on to win the East.  Maybe this is the confidence-building win that gets us going for our inevitable run through the SEC tourney to the Final Four.  Probably not.  But one can dream.

On to the numbers! 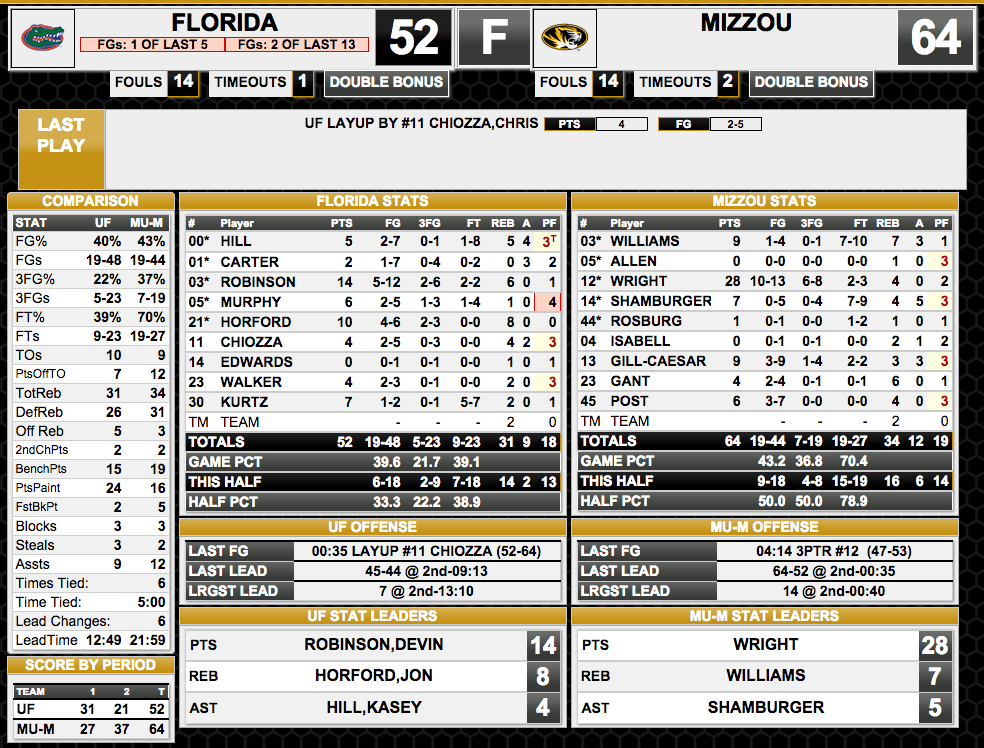 You had to figure I was going to lead with this one.  Namon Wright apparently hates the state of Florida, because he more or less singlehandedly beat their state university's basketball team.  What's more astonishing isn't the pure number of points, it's the efficiency with which he scored them.  He put up nearly 30 points, and only missed 3 shots.  We haven't seen a shooting performance like that all year, and boy, it was fun.

I've said all year that I'm not sure how this team has put up such atrocious shooting numbers at times, when it has guys who are clearly capable of hitting from 3.  Perhaps the most baffling has been Wright, who has a pretty, pure stroke, but hasn't gotten in rhythm all year.  Anderson's been starting him anyway, which suggests he's doing good things in practice, but it was nice to see him have a good game.

Check that.  A good game would have been nice.  The game he had was incredible and it was awesome.  In celebration, I am going to splatter Namon Wright gifs all over everything in this post.  Here's one to start:

Just in case you were worried that someone swapped out this team with some sort of genetically engineered clone players, its most frustrating characteristic - long scoring droughts - reared its head again last night.  There were more or less 12 minutes of play in which the team just could not get the ball in the hoop.  For about 5 minutes at the end of the first half, and about 7 minutes in the second half, nobody could do a thing on offense.  Luckily, Mizzou was playing a fellow offensively challenged team in Florida, who went through droughts of their own, and that kept the game within reach.

The score was 45-46 Florida with 6:51 left in the second half, and Mizzou had trailed for all but a few brief seconds, thanks to a long offensive drought.  I was thinking "This is it.  This is where we make a little run, but it's not enough.  This is where Florida scores just enough to put us away."  It seemed like the crowd at Mizzou Arena was thinking that, too.  After a few rowdy moments, the atmosphere had quieted.  We were all waiting for the bottom to fall out.

Then, Jakeenan Gant blew the roof off the place.

After that, Mizzou never trailed again.

With just under 4 minutes left, Jonathan Williams III (who had to be a little relieved that all he had to do was rebound after trying to carry the team for weeks on end) fouled Kasey Hill.  Mizzou then proceeded to keep fouling Florida players down the stretch, about one per minute.  We've talked a lot about the perils of a young team, and this is a young team problem - you do not foul when you're trying to put a game away with a lead.  Give up layups before you foul.  Luckily, Florida bailed them out by missing free throw after free throw and fouling our guys 8 times, twice as often as we fouled them.  But you can bet that they'll be hearing about that from Kim Anderson.

Speaking of which, Coach A has got to be relieved that he gets to complain about some things that happened in a win.  It's been a long time coming.

Outside of Namon Wright, the rest of the team's performance was pretty uneven (as evidenced by the 1-11 3 point shooting performance and the long offensive droughts).  But even this monster of a game by Namon Wright would have been a wasted effort without other guys on the team.  J3 and Montaque Gill-Caesar tied for second leading scorer with 9 points each.

J3 had a performance like what we saw from him last year - he mainly crashed the boards (he was Mizzou's leading rebounder with 7) and did most of his damage (7 of 9 points) at the free throw line.  He hit the last 4 free throws to ice the game.

Teki tried to pace his fellow freshman, but despite an early 3 pointer falling, didn't have the shot from range.  Despite that, he helped carry the scoring load for a brief period in the second half, posting up against smaller Florida guards, drawing a foul and draining midrange jumpers over them.  He bookended Gant's huge block-dunk combo and put Mizzou in a position to salt this game away.  Teki obviously wants to be a big-time scorer, but the consistency just isn't there yet.  What's promising is that, in a game where he didn't have his 3 point shot, he found another way to contribute - he's a big, physical body for a guard, and Florida didn't have someone who could match up with him.

One last thing: there has (understandably) been a lot of contention about Kim Anderson's coaching this year.  That happens when you lose 13 straight games.  But what was damn impressive last night was that, when everybody in Mizzou Arena knew that the Tigers were going to get Namon Wright the ball, Anderson and his assistants drew up play after play after play to get him open.  It mostly worked, save for the droughts (which were largely caused by Mizzou trying to find a solution to Florida denying Wright the ball).

When Mizzou hired Kim Anderson, most of us figured he would be at least a serviceable in-game coach.  We haven't gotten to see much of that this year.  Last night's performance suggests that the problem isn't a lack of ability, but rather circumstances.  This team is very, very young, and Keanau Post, a senior, has been as inconsistent as anybody on the roster.  The coaching staff has had no way to know, not just game to game, but minute to minute, what player is going to be able to hit a shot.  Last night, everyone in the building knew who could hit a shot, and, and sure enough, Kim and company worked within the offense to get him wide-open shots like this:

Now, there's almost no way Namon is going to keep scoring at this clip.  But if he can retain some consistency in his jump shot, it will be amazing how much the offense opens up.

We want more wins, of course.  But even if we don't get them, this one was a hell of a lot of fun.  We've been asking for something, anything to give us hope for the future.  Last night, Namon Wright gave it to us.

Not the best quality but I did catch some raw emotion. I think @Tekihwbt was happy last night. @MizzouHoops pic.twitter.com/pd54aizj1x