Mizzou Football, Its Moments and The People We Share Them With

"The moon has a face, and it smiles on the lake, and causes the ripples in time. I'm lucky to be here with someone I like, who maketh my spirit to shine." - Warren Zevon, "Don't Let Us Get Sick"

There are few things in life, in print or in conversation, that I abhor more than the continued bemoaning of the current "always connected" state of American society. My vision, which is compared to bats at best and John Higgins at worst, has probably been irreparably harmed by the viciousness at which my eyes roll with every such complaint.

But, admittedly, embedded in this tidal wave of generational elitism and misguided nostalgia are several morsels of truth I'm willing to concede, even if the attached moral posturing grows tiresome. My inability to go an extended amount of time in casual settings without checking my phone may be well-noted, but it is not a referendum on the task or conversation at hand. Being a part of the "connected" generation has become a slanderous mark in many ways without realizing what it is, and more importantly who it is, that we're connecting with.

So while this generational gap is blamed for dwindling attention spans and the downfall of social decorum, its application in our realm is this: There now exists great emphasis on either the minute detail or the big picture, and very little in between.

When Rock M Nation was founded in October 2007, the leadership would be lying to you if it said it had any grand plan. There were no 15-slide presentations on content strategies. There was no calendar for posting. There was no activation strategy, no business plan, no steps for monetization. To my memory, there was a college freshman and an early 30's data analyst signing an agreement from SportsBlogs, Inc. in a Gillett Hall lobby that only still exists by technicality (recent renovations have rendered it all but unrecognizable). Of all the things - big and small, smart and stupid - that this corner of the internet has become, after some crawling behind the scenes, it took its first official step there on the corner of Virginia and Rollins.

There now exists no shortage of people willing to analyze, debate and belittle both the big picture and the minute detail. In one of my favorite comments ever posted on this site (and one I reference way too frequently), Michael Atchison intimated how our current state of existence makes every refresh, every CMD+R, every F5 its own 24-hour news cycle. The beauty of immediacy and the fury of waiting are not mutually exclusive. They're pretty damned related, actually. Ask anyone who has ever texted the object of his or her nascent affection. You'll be spun no less than a dozen stories of watching a back-and-forth conversation of immediate responses maddeningly halt into the Chinese water torture of a long, drawn-out wait for one more answer. Hell hath no fury like someone staring at a "..." read receipt for 30 minutes.

Thoughtfulness can be lost in the process of immediacy as HOT SPORTZ TAKES and POLITICAL TRUTH BOMBS fire with machine gun speed. Memes have grown and died faster than most vignettes can be written. In a sense, every day offers death, rebirth and natural selection in the zeitgeist. The old dies quickly, and the young matures rapidly.

So how does this relate to the start of college football season? What does this have to do with the existence of Rock M Nation, with wearing gold, with doing the Missouri Waltz? How does this apply to Josh Henson's new offense, Henry Josey's knee or the cornerback spot opposite E.J. Gaines?

"Tomorrow, We Speak Its Language" 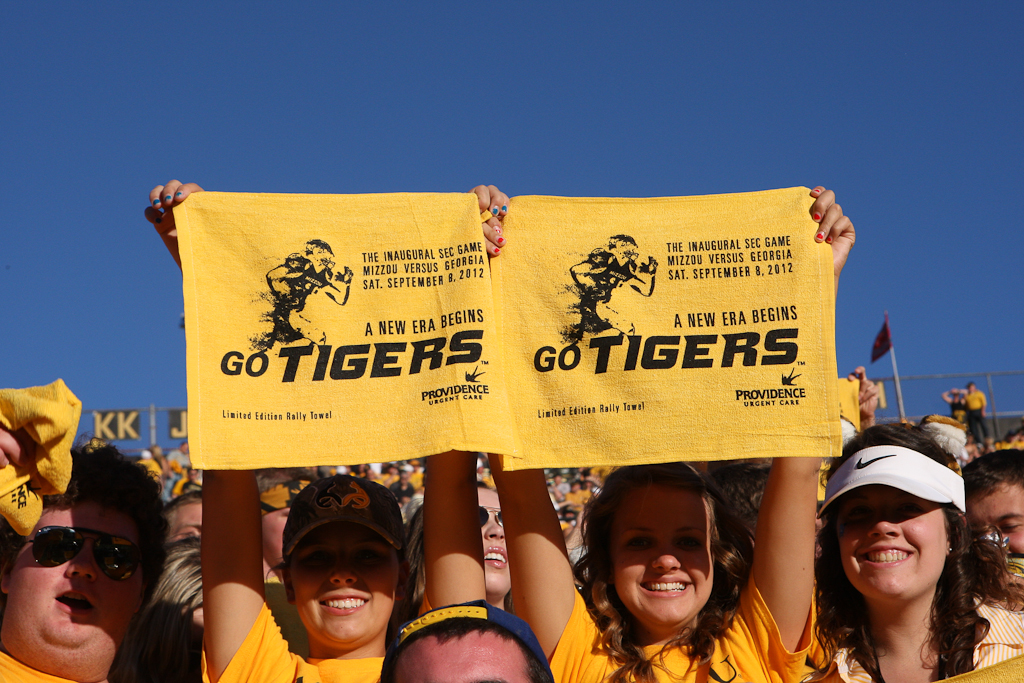 From the RMN archives: RPT's prologue to the 2012 season.

It doesn't have anything to do with these things we hold dear directly, but it once again alludes to what I called last year "the experience of Mizzou Football," one that I noted "unequivocally and indisputably changed" forever beginning in the fall of 2012. In his work here, Bill has created incredible attention for both the big picture and the minute detail as it pertains to the experience of Mizzou Football (I didn't know column ZF existed in Excel before Bill). But lost in the moments are just that: moments.

Forget every game. In Missouri's current circumstances, every play is a referendum on its future in the court of public opinion. Every pass, every block, every run, every verbal commit is a signal as to whether or not Missouri belongs. Mizzou fans have an almost pathological desire to feel loved and accepted in their new family. That desire is so inextricably tied to our own reflection in the program's esteem that Abraham Maslow's great grandkids are probably attending the university on the royalty fees from the application of his hierarchy in our fan base alone.

At its worst, it occupies a couple of hours on a Saturday and gives us an excuse to congregate, drink, grill, be outside, yell and act ridiculous. At its best, it's a transcendental human experience.

With each play, we want to know what this means at this exact time and what it means for the future. And that makes sense. We wallow in our collective misery, but it's not Stockholm Syndrome. Collectively, we put so much emotional investment in something that, when done right, gives us indescribable joy. At its worst, it occupies a couple of hours on a Saturday and gives us an excuse to congregate, drink, grill, be outside, yell and act ridiculous. At its best, it's a transcendental human experience.

Bear with me as I circle back to my main point in trademark verbose fashion. Many alums have gone years, decades, possibly generations without seeing their Tigers play live. I have no claim to such martyrdom. In my first year of true adulthood, 2011 came and went without any chance for me to see my Tigers play in person. My distance and my work schedule are such now that full Saturdays in the presence of the Tigers -- once a staple and a pinnacle of my weeks -- are no longer an option beyond one weekend a year.

Here's where I delve into the personal side. Last year, my work schedule afforded me one opportunity to see Mizzou live in 2012 - in early November in Knoxville. This was really the best of almost all worlds, as it provided me the following: A) the chance to see one of my oldest friends and former classmates who lived/worked in Knoxville at the time; B) the chance to see some of my favorite people who had also elected to make the trip that weekend as well; and C) the chance to see the Tigers driving into the checkerboard endzones -- obviously a landmark of prominence among us college football devotees -- for the first time. My professional life is such that, for better and for worse, very little else exists to me for about six months a year. Regardless of how the game turned out, between the company and the competition, this trip was going to one of those that recalibrates you - one that reconnects you with what you wanted to be connected with and who you want to be connected to. For as unbalanced as it can make us, sometimes college football and everything connected to it has a way of restoring personal equilibrium.

If you're reading Rock M Nation, odds are that I need not remind you how Mizzou's game at Tennessee turned out that day. On a Knox County day probably more accurately depicted by a painter than a wordsmith, neither the big picture nor the minute detail could outrank the moment.

I've frequently said of my favorite songwriter that he "makes simple things complex and makes complex things simple." This is the essence of what makes my college football memories. I remember ordering pizza at 2 a.m. with roommates while watching the DVR copy of the 2007 Nebraska game we'd just attended hours earlier. I remember voices behind various closed doors in the fourth floor of Gillett Hall exploding on a Thursday night with every Arizona touchdown against Oregon -- a random Pac-10 game in which Mizzou wasn't even playing -- in November 2007 as it dawned on all of us that the planets just might align after all. I remember bear-hugging my dad in my Dallas-area living room when Todd Reesing aerated the Arrowhead endzone.

I remember my roommate from Marching Mizzou playing Every True Son on his trombone in our apartment as Missouri was running out the clock in the fourth quarter in an all but empty stadium in Lincoln, Neb. in 2008. I remember walking with my roommate from the Memorial Stadium press box through the baseball/softball lots to our car in the Reactor media lot after the 2010 Oklahoma game -- detailing that Gahn McGaffie's kickoff return was the only time my journalistic integrity had ever been threatened, as my heart attempted to figuratively jump out of my chest and subconsciously lift me into the air on the northern end of the east sideline.

And last November, I remember not just DGB clutching a pass and cradling a ball in the endzone of Neyland Stadium's Northwest corner on 4th and 12. I remember who I was with, how we reacted, and most importantly, how it felt. Needing four overtimes just to get to .500 in November didn't matter. When a moment strikes, context can go to hell. It -- again -- connects us with what we want to be connected with, and who we wanted to be connected to.

Last year, I told you to immerse yourselves in Mizzou Football. Perhaps I was too broad. This year, my plea is this: immerse yourself in a moment. During Mizzou's ridiculous run through the early portion of the 2008 schedule, Bill reminded us of a Vol fan that said one of his bigger regrets was that he didn't take the time to appreciate UT's run in the late 90's. Bill said it may never get any better than the offense we were seeing in that stretch, and to this point, he's been right. In the midst of the apprehension, we forgot the appreciation. We worry, we wail, we wallow because that's what we do. That's why this site exists. That should never come under fire.

But beyond taking the time to look for the 10,000-foot view or magnify it to the atomic level, I beg of you: immerse yourself in the moment. Narratives and storylines grip us day-to-day, but it's the moments that grip us for life. In 2013, if/when that moment comes with its arms outstretched, don't ask questions. Embrace that sucker with a vice grip and never let it go.