2013 Missouri opponent roundup: They Supposed to be SEC

The SEC is the premier college football conference. What happened with the SEC teams on our schedule?

Share All sharing options for: 2013 Missouri opponent roundup: They Supposed to be SEC 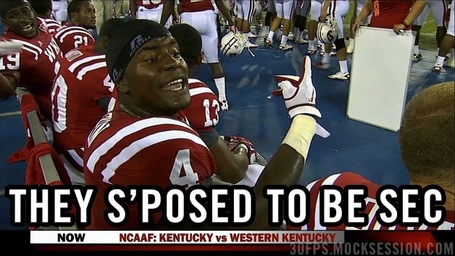 In the end, you can put the blame on the offense, the defense, or their respective coordinators, but the bottom line was that we simply made too many mistakes.Â  Most visibly on offense, we kept shooting ourselves not in the foot, but in the head. Boneheaded penalties, a 100% missed blocking assignment that resulted in Aaron Murray's fumble on a blindside sack, and quite probably the worst INT I've seen Murray throw in at least 2 years.

Florida vs. Toledo, Rapid Recap: The good, bad, and ugly from a 24-6 win in theÂ heat

This was a boring game

The best thing about being 1-0 is a chance to go 2-0, as Will Muschamp said after this game, but this was one of the more perfunctory season-opening wins in Florida's recent history. Florida was content to show very little to its future foes on offense â the reverse to Patton was as exotic as it got, and Florida ran that play more than once in open practice â or defense, where it flashed the stunts and twists sure to come from Brad Lawing's defensive line infrequently, and only put the "rabbits" package up front (pass-rushing specialists Bullard, Easley, Fowler, and Powell as a four-man front) once that I noticed. A holding penalty near the goal line ended a serious touchdown threat, and a missed field goal from Austin Hardin ended that drive; Florida could easily have scored again at the end of the game, but didn't. This could've been a 34-6 game with little more effort, but, instead, it made me look up this fact: The last time Florida scored fewer than the 24 points it put up this Saturday in a season opener was 1997, when the Gators topped Southern Mississippi 21-6.

The game will stand as one of the greatest of all time in the Vanderbilt-Ole Miss rivalry. The Rebels and Commodores exchanged the lead three times in the final two minutes in an instant classic in Nashville. Only when Austyn Carta-Samuels's final pass caromed into Cody Prewitt's hands could fans on either side exhale once again.

The Rebels are 1-0. I Â think Whiskey Wednesday put it best, when he explained that he is "frustrated with the way we played, but optimistic about how we can play." I'd say that sums up the potential for this season pretty well. Let's celebrate, and let's get ready for Southeast Missouri.

Quarterback Justin Worley played the entire first half, and Nathan Peterman played the second with the second team. Worley went 11-13 for 104 yards and 3 TDs, and Peterman went 4-8 for 28 yards. Rajion Neal led all rushers with 141 yards, and Marquez North led all receivers with 33 yards on 3 catches.

A lot of attention went to Jadeveon Clowney, obviously, and you can expect that his every play will be heavily scrutinized. He did seem legitimately gassed, which is a little concerning, but it was hot and humid out there, and he reportedly had a minor stomach bug. Still, despite not having any "wow" plays, Clowney had a huge effect on the game. Other than a couple of drives when he seemed really beat, he was routinely disruptive despite all the double teams, roll outs to the other side, and so forth. It was clear that UNC's game plan was thoroughly shaped around trying to negate Clowney's impact, and he still had an impact. That's a good measure of a great pass-rushing defensive end, even if it's not a quality that's going to get him a lot of Heisman votes.

POINT TO THE SCOREBOARD -- A&M Outlasts Rice in Johnny's Return

I thought Joeckel performed admirably, and ran the offense well. That being said, the offense just looks different under Manziel, and not necessarily always in a good way. It seems that when Joeckel is in there, we are more patient with our running backs. When Johnny is in there (at least at the start) we rely on Johnny to do everything and almost forget about our stable of backs (but that changed late in the game). There's a happy medium that, I think, it will take us a couple of games to find.