Maty Mauk is inaccurate, inconsistent, and one hell of a leader

Maty Mauk is a great leader with a flair for making the big pass late in games. He's also a fundamentally inconsistent passer who is almost worse at the easy throws than the hard throws. Oh yeah, and he was only a sophomore last year. He's got time.

Share All sharing options for: Maty Mauk is inaccurate, inconsistent, and one hell of a leader

Jack Peglow: In his first year as a full-time starter, Maty showed flashes of both brilliance and frustration. Plagued by inconsistency, he bumbled his way to eleven wins and a berth in the SEC Championship Game. Well, the team as a whole did that, but attributing wins to the quarterback, baseball-style, is the hot new trend, and I am nothing if not a follower.

Seriously though, quarterback is one of the most important positions on the field, and if Mizzou wants to make it back to Atlanta for the third straight year, the Tigers will need an improved Maty Mauk manning the helm. One of the biggest ways he can do so is by upping that completion percentage; his 2014 mark of 53 percent just isn’t going to cut it. Breaking in a brand new set of receivers probably isn’t going to help much much in that regard, but we said the same thing last year, and then Bud Sasser racked up 1,000+ receiving yards.

If anything, the inexperience at receiver places even more of a demand on Maty to improve his accuracy. A fresh young pass-catcher can’t have a breakout season if his quarterback doesn’t throw him catchable balls.

If the prior statement worries you, take solace in this fact: we know that Mauk can make this step. We’ve seen him do it before. You can find the proof by picking a game from last season at random and skipping ahead to the fourth quarter. Maty’s completion percentage jumps to 58 percent and his QB rating skyrockets to 166.3. If he can flip that switch on at the beginning of the game instead of the beginning of the fourth quarter, he’ll do just fine.

The Beef: A Maty Mauk completing 58 percent of his passes on the season (and not just in the fourth quarter) would likely spell success for the Tigers this season, but I think one of the big keys to success (especially early) is going to be the legs of Mauk rather than the arm. He certainly looked slimmed down during our Spring Game exposure, and given the experience (in starts) on the offensive line and backfield, and the lack thereof in the WR corps, I think we see Mauk involved in the running game a bit more to start while everyone (himself included) settles in.

We know from the 2013 Tennessee game that he is pretty prolific at taking what the defense will give him, and with his body looking like he is carrying less weight (combined with the talent Mizzou should have behind him), I could see the Tigers grinding some opponents out a bit to start the year while the young WRs get acclimated. At that point, Mauk’s accuracy on the short balls (screens and flares) will become all the more important as a means to stretch the opposing defense back out for the RBs.

But think about it: an offense trying to control the ball will also provide some rest for a defense which may start the year just a tad depleted and young across the front four because of expected attrition (Markus Golden, Shane Ray, Lucas Vincent, Matt Hoch), unexpected attrition (Marcus Loud), and injury (Harold Brantley). 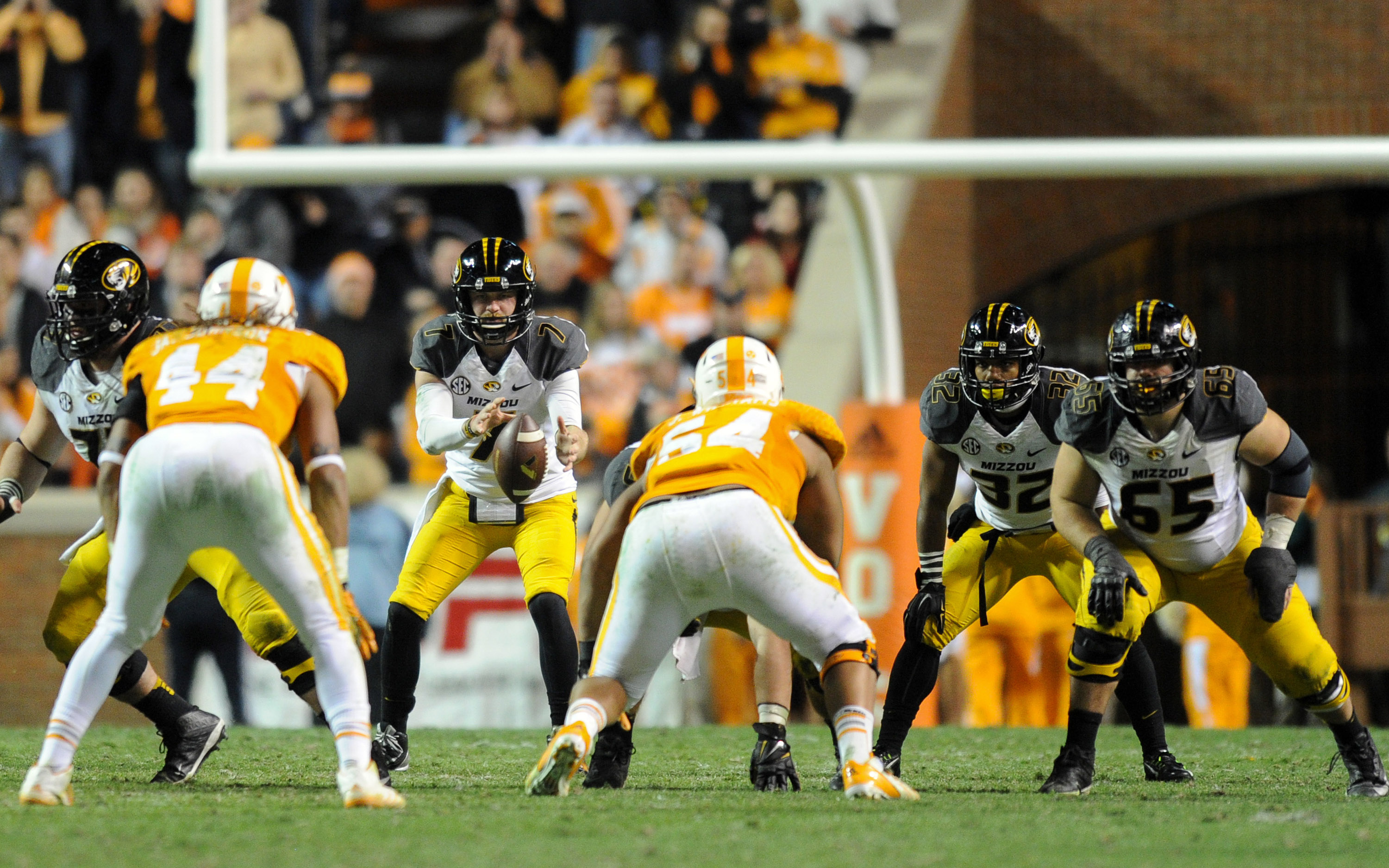 switzy227: I think in general there is inclination to suggest that Maty is what Maty is. But the dude’s only a junior this year. Lots of players make leaps in those last two years; if Maty is one of those, he’s going to be something special. If not, there’s always the memory of him trucking a Minneosta Golden Gopher. Even those who hate Backwards Running Maty have to appreciate Purposeful Running Maty, I would hope.

Kacc56: As switzy brought up, Maty is only going to be a junior this year, but he's one with a lot of experience. I expect him to perform better on an individual basis, but will an extreme lack of experienced pass catchers render that improvement irrelevant? A potentially more accurate Mauk could help a young but seemingly athletic receiver corps to succeed. Using him more in the run game (he indeed looked slimmed down and explosive in the spring game) can take some pressure off the passing game.

jaeger: Lots has been said already, so I’ll just say he’s got a big arm and great athleticism. If he can figure out how to connect on the short routes with some consistency, and if he can make judicious use of his legs, that will go a long, long way toward making Mizzou a threat in the East again this year.

Fullback U: Maty Mauk is the elephant in the room isn’t he?

Everyone from the casual fan to ESPN talks about how inconsistent Mauk is while balancing the criticism with the fact he appears to be able to flip the switch in the fourth quarter. I distinctly recall raging at Gary Pinkel’s stubbornness during the Cotton Bowl because James Franklin was clearly proving ineffective and Gary was being too stubborn to put Mauk in. I felt vindicated when Mauk did come in and promptly led the Tigers down the field and lofted a touchdown pass to Marcus Lucas.

How quickly things change. I’ve already told Bill that if we see the Mauk of 2014 I’m probably going to break down at some point and demand Eddie Printz see the field. It is obvious to me that the team supports Mauk and that he can be an effective and perhaps even game-changing triggerman. But I think the offense has to be adjusted to fit his talents both passing and running. I think this comes in the form of run-heavy offense similar to one Gus Malzhan runs at Auburn.

Bill C.: To switzy's point, you are what you are by this point in your career ... in terms of style. And I think we know at this point that Maty Mauk is not going to be a 70 percent passer. At his best, he will be a high-50s passer in terms of completion rate, with quite a few touchdowns, not too many picks, and, as others have noted, excellent mobility. Removing sacks from the equation, he rushed for over 500 yards last year, and that was with him battling injury, running for his life (justifiably or unjustifiably) because his receivers (often injured) were covered, et cetera.

Really, though, for all the talk of inconsistency and need for improvement, it bears mentioning that he's already shown hints of improvement.

Mauk took advantage of some bad defenses and a healthy receiving corps to put up awesome numbers early on, and when Jimmie Hunt and Darius White got hurt and Mizzou encountered defenses that had better secondaries and a scouting report, the production dried up to an almost hilarious degree. For the last seven games, though, we saw the template for a Good Maty.

He still wasn't completing quite enough passes -- 11-for-23 against Vandy, 16-for-34 against Alabama -- but he was taking advantage of a stable run game and hitting some deeper passes, particularly against Tennessee (12 completions for 230 yards) and Alabama (16 for 272). If his legs are indeed a weapon, and if he is at least a little bit better at hitting the tight end camped out in a hole in the zone seven yards away (seriously, that might be the most important throw for him to master this year), Maty will be alright. He will at least be good enough that, if the talent around him is at a certain level, Mizzou will win a lot of games.

* With so much youth in the receiving corps, this might not be the case until 2016. We'll see.

(And yes, this is his team, and barring injury, yelling for the backup, be it Eddie Printz, Drew Lock, Corbin Berkstresser, or Marvin Zanders, is nothing but a therapeutic exercise. It ain't happening.) 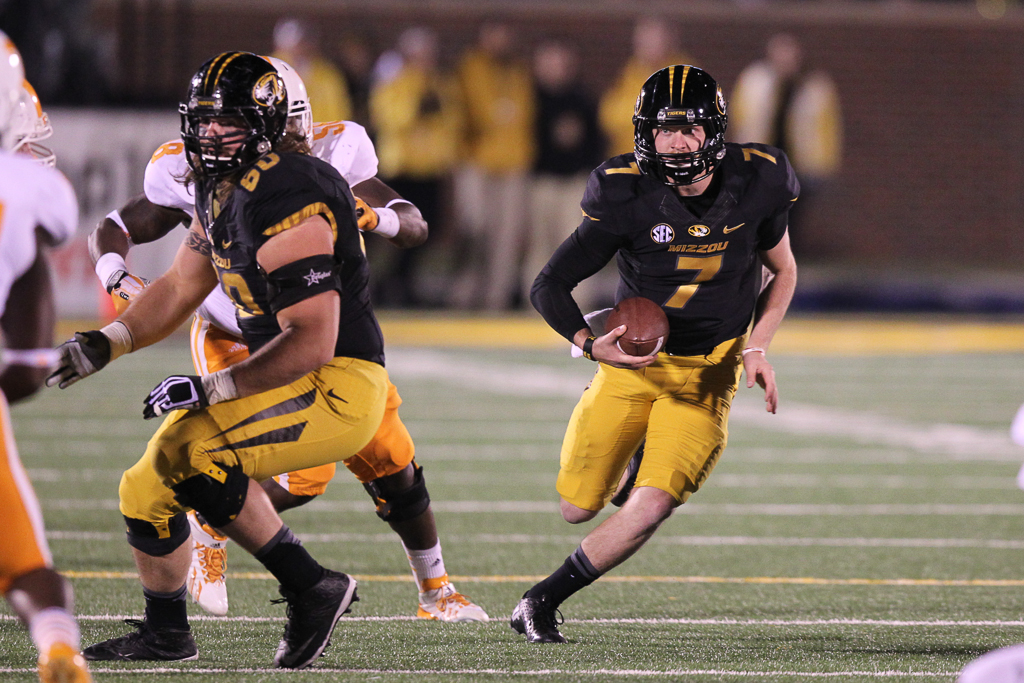