Fine, I'm in. Drew Lock should be Missouri's starting quarterback.

Gary Pinkel has never demoted a healthy quarterback at Missouri. We should keep that in mind. Pinkel's long been good at small tweaks instead of large, at understanding the role leadership and consistency play within a program. When Mizzou's offense disintegrated last year, he and his staff stuck with Maty Mauk, as did most of the players, and they were rewarded with lovely improvement down the stretch.

Share All sharing options for: Fine, I'm in. Drew Lock should be Missouri's starting quarterback.

No matter what we might hope to see as fans, we're probably not going to see it. Mizzou's staff will continue to peck and poke around for changes and do what they can to draw out improvement from the guys currently atop the two-deep. And they might get it. We don't have to look that far in the rearview to see how this approach can work. If history is any indication -- and it usually is (but isn't always) -- then Mauk will remain Missouri's No. 1 quarterback.

But if Pinkel wanted to make a change, he has my blessing.

With Russell Hansbrough so obviously limited, and even 'veteran' receivers like J'Mon Moore and Nate Brown still battling inconsistency, Missouri does not have a go-to playmaker on this offense. And from what we saw yesterday, it's pretty clear that Hansbrough isn't suddenly going to be 100% and Brown and Moore aren't suddenly going to be seniors instead of sophomores.

When you are devoid of proven play-makers, you look first for consistency, then for potential. Even in his best days, Maty Mauk isn't particularly consistent; he's a gamer, he's a leader, and he's proven on many occasions that he can make big passes late in tight games, even if he didn't last night. But he's never been particularly efficient or consistent. And worse yet, he's got not a single consistent player/unit to lean on.

At this point, there's no question that the player with the most potential on this offense is Drew Lock. Or, more specifically, Lock's right arm. He is not a savior, and Mizzou wouldn't suddenly average 40 points per game with him in charge. We know from our limited sample with him -- a few possessions and some scrimmages in fall camp -- that he would probably take more sacks than Mauk, and we've seen that, on the rare occasion that he does make a poor throw, he struggles to move past it. After his pick against Arkansas State, he ripped his chin strap off and acted semi-dramatic on the way back to the sideline. After his underthrown could've-been-a-TD pass last night, Mizzou called timeout, and he was demonstratively angry, slumping his shoulders and going through his throwing motion again. There's even a nice picture of Mauk consoling Lock during the timeout. 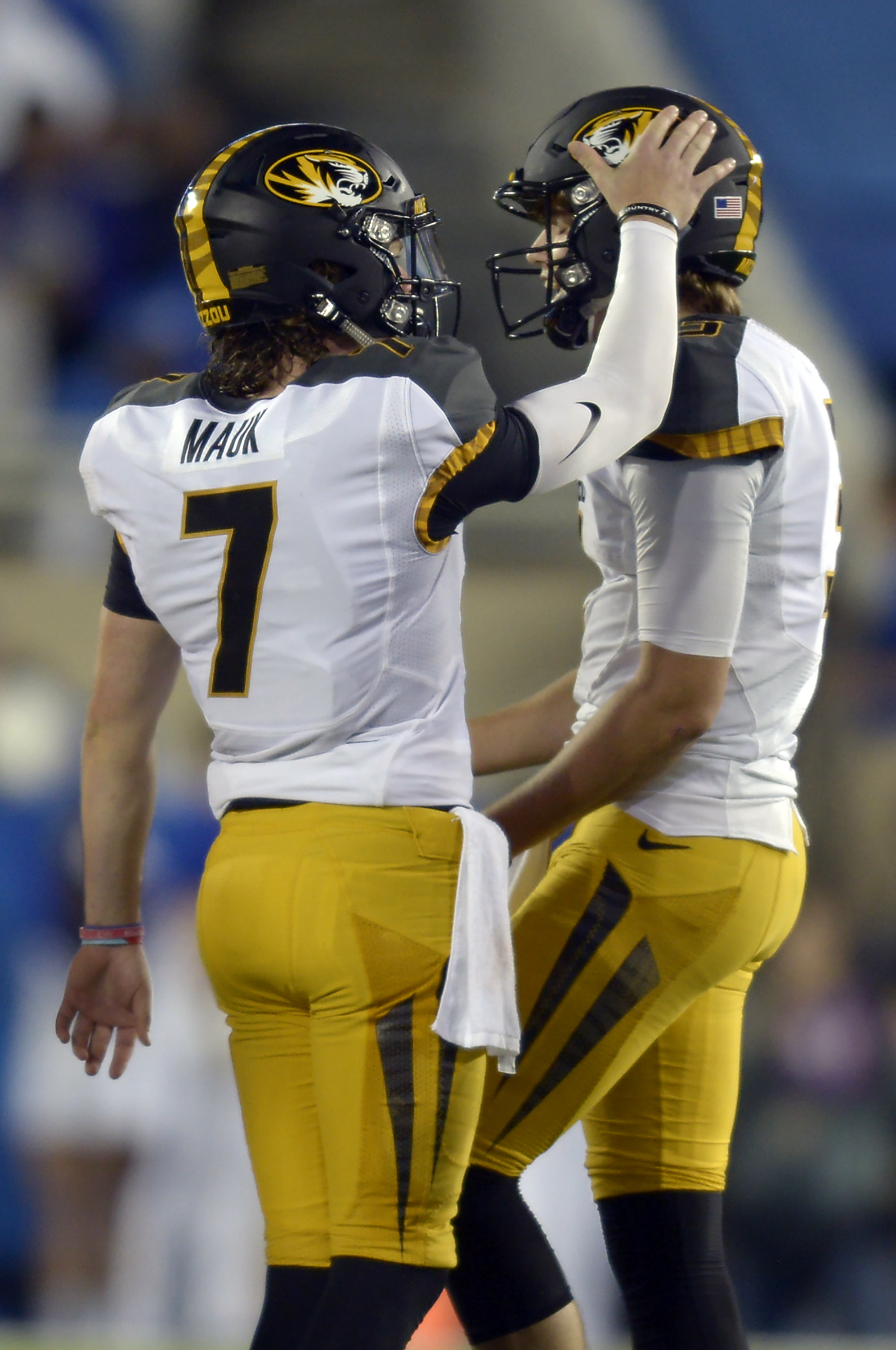 These aren't permanent flaws on Lock's part, mind you; these are reminders that he's a true freshman. The way he gets mad at a single bad throw is almost endearing -- it's like he's as surprised as we are when he makes an imperfect throw -- and he'll almost certainly move past that with time.

Lock isn't ready to lead a monstrous offense. He is, after all, just 9-for-15 for 87 yards and a pick in three games against FBS teams. But he might be ready to lead one that can score 20 points against a defense with a pulse. And it doesn't appear we can say that about Mauk.

I feel bad for Maty. Like offensive coordinator Josh Henson, he's tasked with making something out of nothing. A first-down handoff means he'll be asked to throw on second-and-9. Opponents have figured out that blitzing isn't the greatest idea, so on said second-and-9, he's surveying the field and seeing about six or seven defenders for the five green receivers he's got running routes. (And last night, he was without Sean Culkin, the closest thing to a grizzly veteran in this receiving corps.) Plus, there's probably a defensive spy ready to chase after him if he tries to run.

Mauk has proven that he can make plays that win close ballgames when he's got a defense and run game at his disposal. He's still got the defense, but he is the run game, and opponents are catching on. And he just cannot frequently make the tough throws it's going to take to drag this lifeless offense forward. Beyond that, while Lock would likely make plenty of mistakes along the way, we know that Maty will, too.

I guess this is me "endorsing" Lock over Mauk, but it's more because of Drew than Maty. Maty is unfairly maligned, I think, because he's seriously got very little to work with. But this offense is in desperate need of assistance, and I just don't think Maty can give that. With Mauk remaining in charge, we might see him making plays if or when Hansbrough heals up more and the offensive line remembers how to actually push the defensive linemen in front of them.

But until then, Mizzou is going to have to hold opponents under 17 ... or even 10 points to win. Through his mistakes, Lock has shown that he will make the occasionally sexy throw that gets the ball down the field. Mauk, for all his career wins and leadership, can't.

There is nothing easy about this choice, no matter how much we like to think it's been 'obvious' that Lock is better for a while. He hasn't been. Without Mauk, Mizzou's best rushing option, the Tigers' run game goes from bad to nonexistent. And with sustained playing time, we might really see some prolonged funks from Lock. The way the staff has handled Lock so far has been sensible, pragmatic, and protective of the future.

With steadier options elsewhere on the field, I would never write a post like this. But in the absence of anything proven, it's probably time to go with potential. It would be one thing to say that the season is lost and Mizzou needs to start looking toward the future. But that's unfair to Kentrell Brothers, Evan Boehm, and all the other seniors who have meant so much to this program.

No, I'm not writing this post because of the future tense. I'm writing it because Drew Lock is probably the best option in the present tense.