What does the Josh Heupel hire mean for Drew Lock and the Missouri offense?

Share All sharing options for: What does the Josh Heupel hire mean for Drew Lock and the Missouri offense?

In Thursday morning's "Josh Heupel to Mizzou" post, I said the following:

Heupel has proven in recent years that he very much tries to adapt to personnel at hand. At the start of his OU tenure, that meant a spread-out, high-tempo offense. In 2014, it meant slowing things down and handing the ball to Samaje Perine a lot. And at Utah State in 2015, it meant something similar ... a run-heavy, slowed-down, not-very-spread-out attack.

He adapts to the personnel at hand. Great. So ... what does that mean for 2016 exactly? To what personnel is he adapting?

We'll begin our look at this, predictably, with the quarterback position.

Incoming Quarterbacks
none (yet)

The quarterback position is both stable and in flux at the same time. It's stable in that Drew Lock is returning; it's in flux in that we don't know who else will fill the depth chart next year. I'm including Maty Mauk here because he's still listed on the Missouri roster and because technically he was only suspended through the end of this season. I think we would all be pretty shocked if he's still on the roster come August; the odds of him transferring (voluntarily or not) are pretty high, one would think. But until we find out otherwise, technically he could still be in Columbia next year.

Beyond Mauk, there's the issue of Eddie Printz, who (last we heard) was on schedule to graduate this coming May. He would be eligible for a graduate transfer at that point and could end up immediately eligible at another school. As long as Lock is healthy and on the roster, Printz doesn't stand to see much playing time here, so in most cases, a guy like that would elect to leave. We'll see.

There's also the matter of the 2016 recruiting class.

Before Gary Pinkel's announced retirement, it appears the Mizzou staff was reconsidering its apparent plan to not sign a QB in the 2016 class. Some JUCO options and under-the-radar high schoolers had emerged as potential targets. Mizzou offered dual-thread JUCO Jerod Evans last week, but he committed to Virginia Tech over the weekend (*shakes fist* FUENTEEEEE!!). As far as I can tell, that's the only offer offer that's gone out. We'll see how hard the Tigers pursue another signal caller, but there are a couple of developments to monitor.

If nobody leaves and Mizzou signs a QB in February, the Tigers could have five scholarship signal callers on the roster next year. If Mauk and Printz both leave and Mizzou signs no one, there are two. (This would be a good time to point out that redshirting freshman Zane Jacoby, from Huntsville, is also on the roster. He both rushed and passed for 5,000 yards at the small-school level in Missouri and became a preferred walk-on this year.)

So there are plenty of questions to answer here, but until noted otherwise, Lock is a constant. What might we learn about the impending Lock-Heupel partnership?

Let's start to look at this by quickly breaking down what Heupel offenses have done in that past -- general tendency data.

Heupel seems more than willing to run the ball a lot, but at first glance, he only really chooses to do so if he's got a natural runner at quarterback and/or a bulldozer like he had in Samaje Perine in 2014. But while he inherits a large, diverse cast of characters at running back, at first glance there isn't a Perine-style back in the mix. (A breakthrough from Chase Abbington or an immediate impact from incoming Nate Strong might change that.)

While Lock has shown pretty good straight-line speed and proved himself a solid all-around athlete as a high school basketball star, we'll say that of the QBs referenced above, he most resembles Landry Jones. He's not a tank like Blake Bell, and he's not a natural dual-threat like Trevor Knight or either of the USU quarterbacks he inherited.

So Hint No. 1 as it pertains to "What will a Heupel offense look like" might be "a lot of passing." I don't know if he'll deem Lock and these receivers ready for the full-on, Landry Jones-style 45 passes per game, but I guess it's not out of the question.

So what has characterized a Heupel passing attack? Some more numbers!

In the receiving corps, there obviously aren't any proven stars scheduled to don the black and gold next year. But what Mizzou lacks in marquee upside, it might make up for in pure quantity. 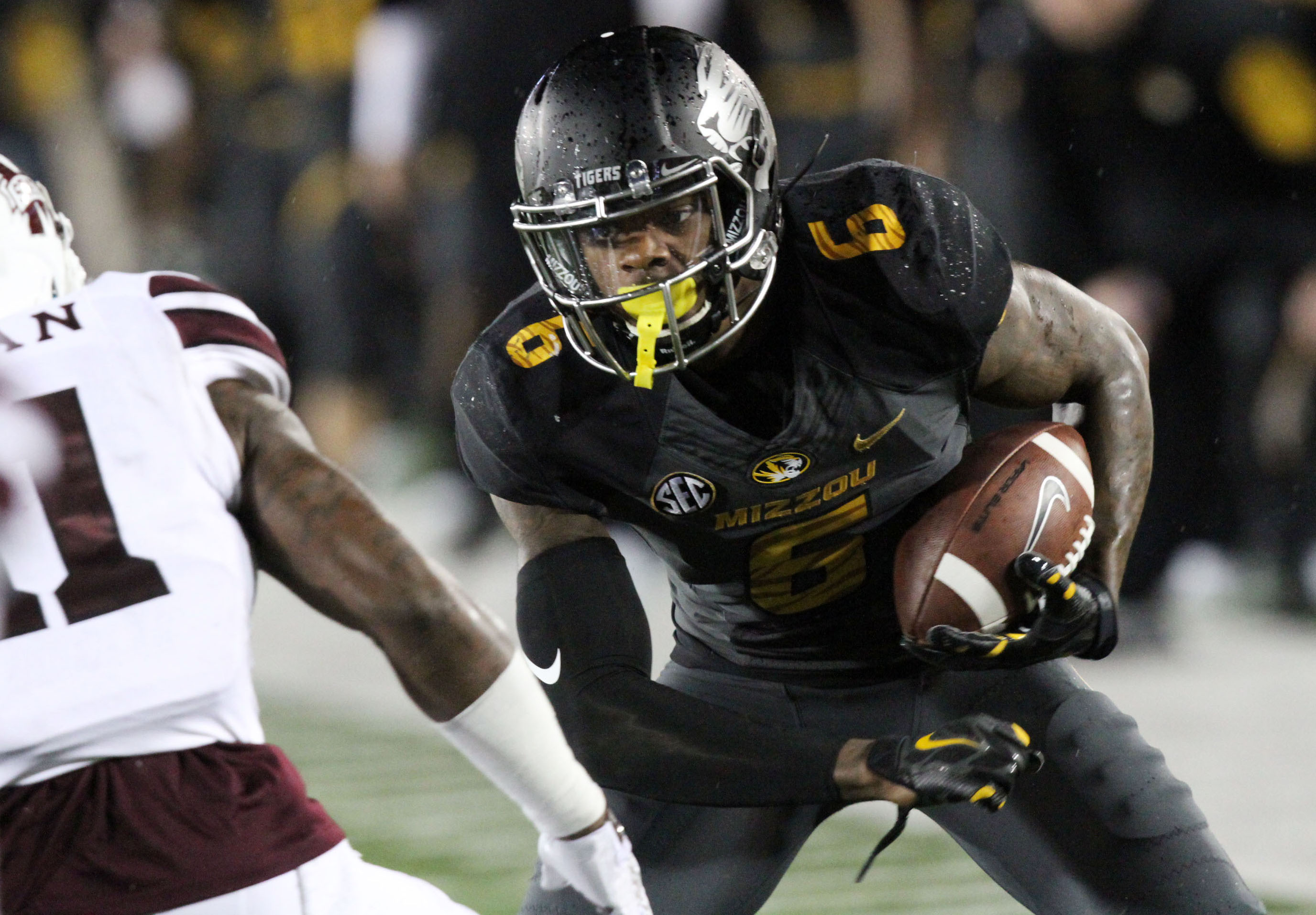 Including Ish Witter, who showed serious potential as a receiver out of the backfield, Mizzou returns eight players who caught at least eight passes last year and five who caught at least 15. Plus, August stars Johnathon Johnson and Justin Smith could quickly join the rotation after redshirt years. There is an interesting mix of size (Brown, Hall, Dilosa, Smith) and speed (Hilton, Wingo) and in-between (Moore, Blair) here.

Of course, the per-target averages were abysmal for everyone but Cam Hilton in 2015, almost as low as I've ever seen. But 2015 was a toxic combination of massive inexperience (not only for Lock, but the receiving corps), woeful rushing, and an offensive coordinator who was out of ideas. In theory, if a little bit of the offense improves, a lot of the offense can improve.

We'll see if the talent will cooperate, of course, but looking at this set of personnel, I would guess that Missouri's tendency stats might most resemble those of Oklahoma's 2012 offense. That year, Jones completed 66% of his passes and spread the ball around considerably, to receivers Kenny Stills (82 catches), Justin Brown (73), Jalen Saunders (62 in nine games), Sterling Shepard (45), and Trey Metoyer (17), running backs Damien Williams (34) and Brennan Clay (15), and H-back Trey Millard (30). Obviously the tight ends will play a role, and there isn't yet a pure H-back on the roster, but expect quantity and hope for quality.

Next up: we'll look at what to expect from the Mizzou run game.