First things first: There will be multiple alignments. We talk a lot about Barry Odom wanting to "move to a 3-4 defense" and whatnot, but even if the first-year Mizzou head coach does that in theory, in practice playing with three down linemen, four linebackers, and four defensive backs will only happen X% of the time. We know this, but it's probably important to start this conversation with that reminder. Your base defense is what you use the most, not what you use all the time.

That said ... all indications are that Odom wants to move to a 3-4 defense. He discovered it was of great use during his time at Memphis, and after letting Craig Kuligowski go, he brought in Chris Wilson, whose most recent experience came in Justin Wilcox's 3-4 defense at USC. The staff isn't complete yet -- assuming Cornell Ford's move to running backs coach is official, then it sounds like Mizzou will still bring in a cornerbacks coach to complement Ryan Walters' work with the safeties -- but on defense, it's mostly complete. And it looks like a staff that can probably deliver a pretty functional 3-4 look.

Considering one's general urge to do something you're good at as much as possible, we might not see these percentages shift violently for another year or two, when more proper recruits can be brought in. That said ... some of the general issues with moving from four down linemen to three might not really apply to this team.

The trickiness comes mostly on the edges. Defensive ends in a 3-4 are generally bigger, tasked more with occupying blockers than making plays. There are exceptions, of course -- Alabama's Jonathan Allen, for instance, has turned into a ridiculous pass rusher (12 sacks) as a 6'2, 283-pound defensive end -- but Alabama's an exception to just about everything, I guess.

In moving toward a 3-4, you can in theory do a disservice to your 4-3 ends; they could end up in a situation where they're too small to be truly effective as an end and too bulky to be effective as an outside linebacker. I don't think that's a problem with this personnel, however. To illustrate, let's look at how a Mizzou 3-4 might take shape next season. For now, we'll ignore current commitments or soon-to-be signees (aside from one). 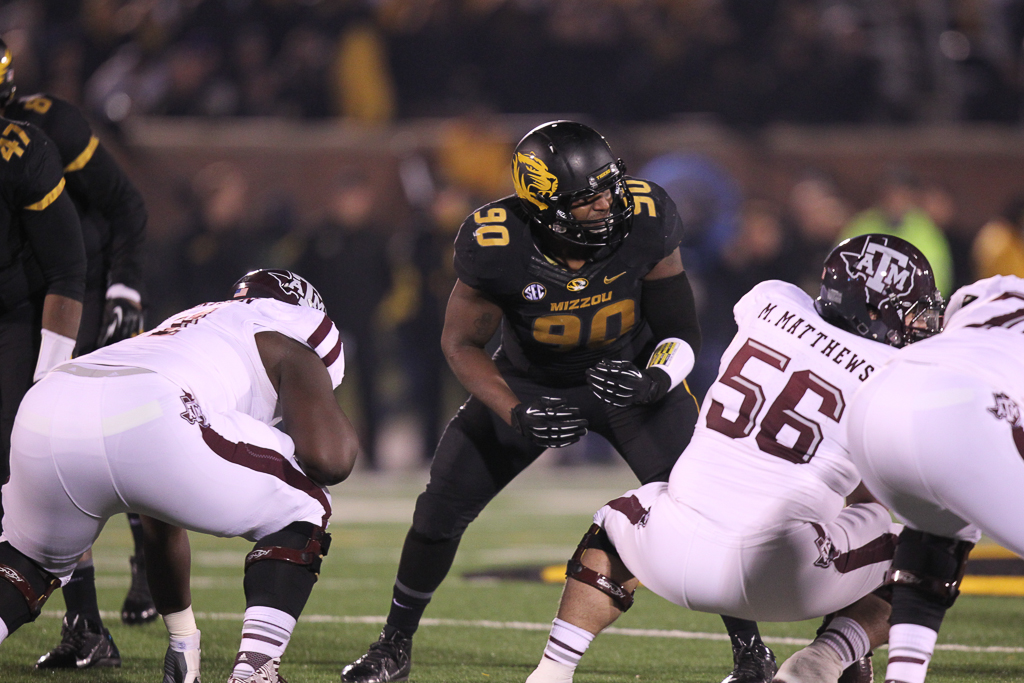 In theory, Rickey Hatley, Josh Moore, and a healthy Harold Brantley could all end up the perfect size for a 3-4 end. All three began their careers quite a bit smaller, and all three could comfortably end up in a 6'2 to 6'5, 275 to 300-pound range.

If we were to assume for a moment that these three guys end up at DE, the most interesting question is ... who ELSE does? Terry Beckner Jr. is an absolute prize, a 300-pounder with quickness and granite strength. He would hold up just fine as a nose tackle. But Mizzou is already going to have a custom-made mountain in the middle with Josh Augusta. That means that Beckner could, in theory, move outside a bit.

Next question: what to do with Marcell Frazier and Walter Brady? Both fit into the 255-265 pound range, which could land them at either DE or OLB depending on their quickness, strength, etc. For now, I'm sending one to each position, and Frazier is listed as the bigger of the two (which surprised me a bit), so he goes at end. And you could ask the same question of younger players like Spencer Williams, Rocel McWilliams, etc. 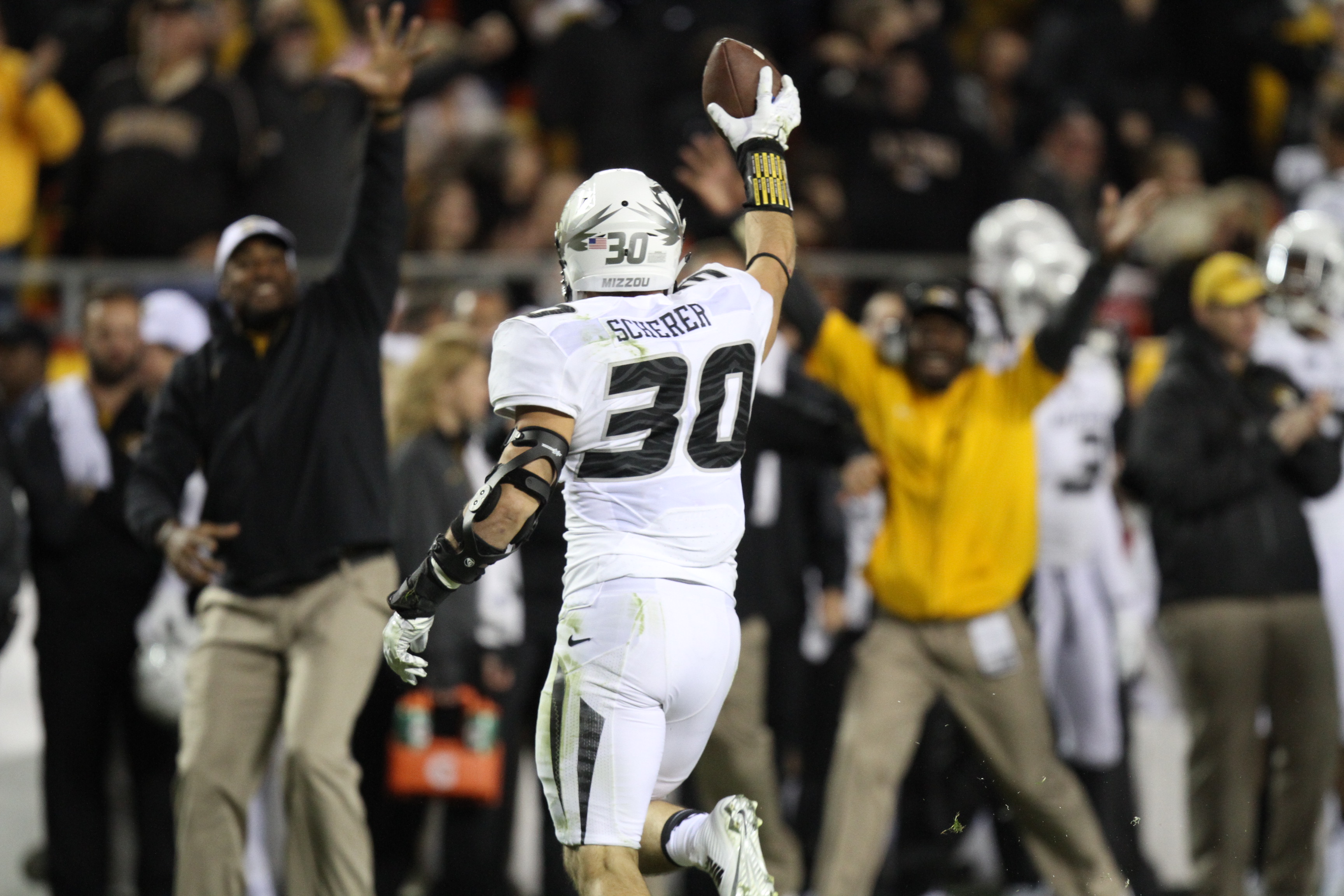 It might be presumptuous of me to assume that Charles Harris could make one hell of a SAM/JACK linebacker in a 3-4, but ... well ... I'm assuming it. He could be the perfect weapon, versatile enough to be used with his hand on the ground or coiled back before the snap. And in theory, Nate Howard could work out well here, too. Howard seemed really lanky this year, which means he could fill out into the 265-pound range and end up on the line, too. But I'm pretty confident that whoever moves from line to OLB will work out pretty well.

That means the rest will fill in pretty intuitively. Michael Scherer and Donavin Newsom fill in two of the remaining starter spots at LB, and the other starting role goes to the winner of a battle royale between Brandon Lee, Joey Burkett, Terez Hall, and Eric Beisel*.

With such quantity and potential quality to choose from in that bunch, I'm confident in saying this will be a ferocious linebacking corps next year -- ferocious front seven, actually -- but I don't have a read on who might be the furthest ahead. Lee has the recruiting profile, Burkett's been a Kentrell Brothers understudy for two years, and Hall was impressive enough to play as a true freshman.

* Beisel, by the way, is an interesting player to watch. He could benefit from the combination of new coaching and an extra linebacker spot and thrive over his final two years in a Mizzou uniform, or he could see the writing on the wall and transfer. He's in that "junior who hasn't played much" danger zone, and a lot of those guys end up heading elsewhere. We'll see. But he could legitimately be a starter in three months or enrolled at a different school in five. 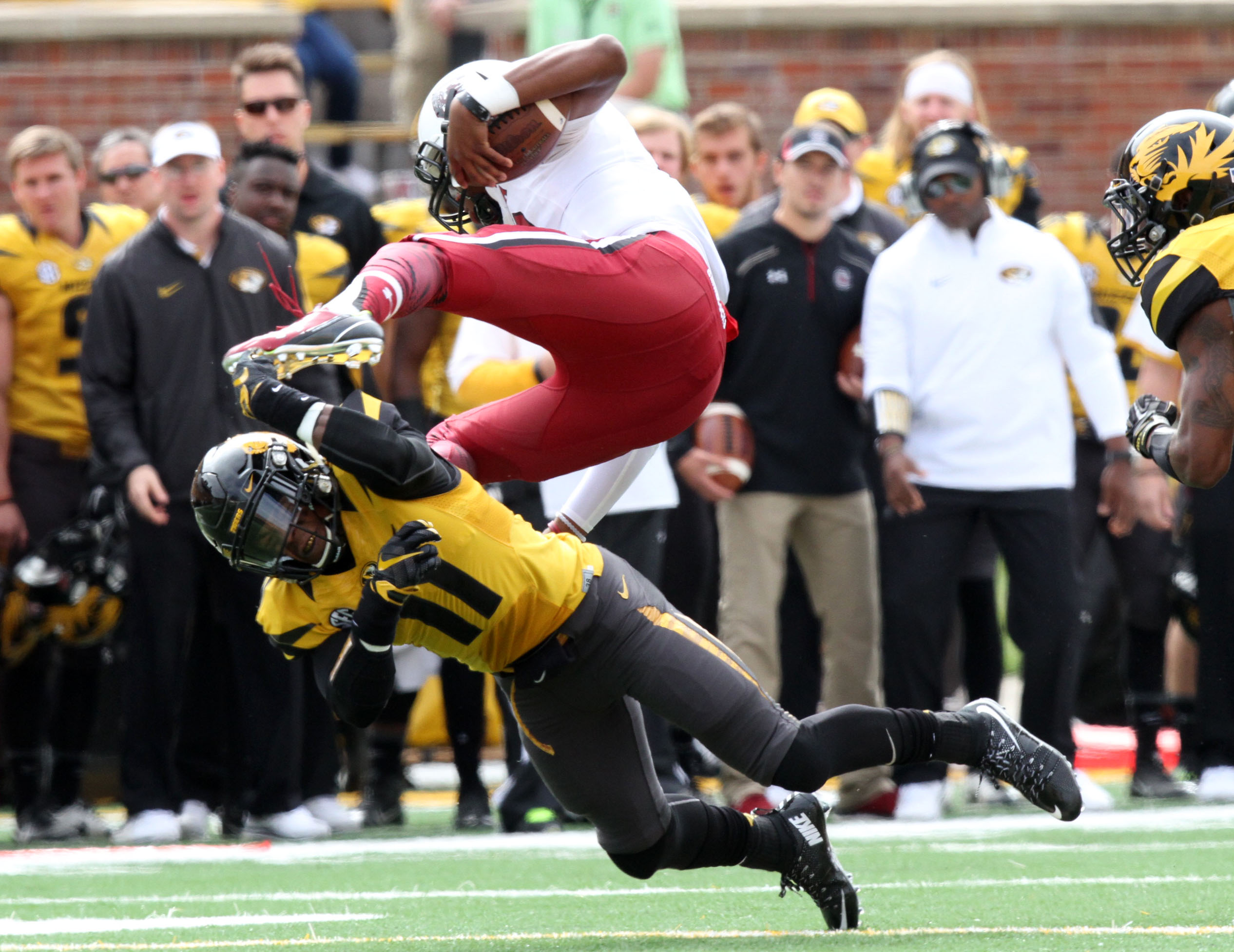 Obviously the secondary doesn't change much regardless of how many linemen there are. With Aarion Penton and Anthony Sherrils returning, Mizzou will have a couple of rocks in the back. But this spring will see a couple of interesting battles regardless of the formation.

It appeared that Logan Cheadle was eating into John Gibson's playing time late in the year, so it could be a nice back-and-forth contest for the starting spot opposite Penton. Meanwhile, with both Ian Simon and Cortland Browning gone, does Thomas Wilson seize a starting spot at safety, or does a youngster -- a healthy Tavon Ross, a redshirt freshman, incoming JUCO signee Greg Taylor -- take it from him?

One more question: last year, a couple of DBs moved to WR for depth purposes. Might we see someone like Ray Wingo or Cam Hilton move back to defense? (And technically, Ronnell Perkins is listed as a WR, too, even though I thought he was going to end up at safety. So we'll see how he's listed this spring.)

Again, the concept of moving to a 3-4 isn't as stark as we probably want to make it. Missouri will spend time in multiple alignments. Plus, "we're moving to a 3-4" doesn't actually say much; it ignores some of the most important (from a coaching standpoint) questions -- which gaps are the linemen lining up in?, are you focusing mostly on man coverage or zone?, etc. We'll start to figure some of those answers out this spring. But for now, I thought it was a useful experiment to simply see who might be lining up in what order.