What I want to see from Missouri's Spring Game

What would you need to see Saturday to make you think Missouri wins 7 or more games?

Share All sharing options for: What I want to see from Missouri's Spring Game

We all want to see zero injuries and 70,000 fans show up, but let's look a little deeper. Is there anything we can glean from a glorified scrimmage?

Simply put, Mizzou's offensive line must be better this year. A historically awful offense was due largely in part to an inability to run or pass block with even a semblance of mediocrity. Sure, Evan Boehm played through injuries and Connor McGovern played out of position but the guys in the other three positions were frequently not up to the task. The one area that I believe the Tigers need to improve the most at is finishing blocks in the run game. That means getting vertical push to create angles for the running game and not giving up on pass blocks until the play is over.

I want to see Missouri's offensive line open holes against a stout defense. I firmly believe sophomore guard Kevin Pendleton can do that. His size and tenacity has been evident to me since last year but during the spring I've noticed him taking on more of a leadership role with his teammates. As we saw last year, one or two good players does not an offensive line make. With Nate Crawford out for the spring, the Tigers lost one of the only returners with proven experience.

On Tuesday we learned that the highly rated redshirt freshman AJ Harris has a right wrist injury which has forced him to focus on playing guard which means redshirt junior Alec Abeln has been the primary center. I'm confident Abeln can handle the mental aspect of the position, but what about making the line calls and devastating blocks we came to explain from Boehm?

Can behemoth Tyler Howell lock down the left tackle position for the next two years? We won't get to see him against Missouri's premiere defensive end Charles Harris but can he hold his own against speedy edge rushers? On the other side, redshirt sophomore Paul Adams looks to man the right tackle position and will be thoroughly test by freshman All-American Walter Brady which should reveal how ready he is for SEC competition.

Finally, the line needs to show they can play up-tempo without committing drive-killing penalties.

Getting to the second level

Last year, Missouri's running backs were hampered by injuries and an ineffective line. Morgan Steward and Chase Abbington, two "bigger" backs, have decided to quit football for different reasons. The leading rusher, Ish Witter returns and according to coaches and players, he's a different, better player now. Trevon Walters is back from an ACL injury while redshirt freshman Ryan Williams rounds out the remaining scholarship running backs currently on campus.

Regardless who's carrying the ball, they need to demonstrate they can do more than take what the offensive line gives them. I don't think Missouri's every down back is on campus yet *cough*Damarea Crocket*cough*. I also don't think Ish Witter is just a placeholder as I think he can be an explosive third down back in a backfield rotation.

Missouri's defense will be missing several key players but we know the defense is still pretty good so any big plays that don't come on obvious blown assignments bodes well. Hard, north-south running that keeps the offense on schedule might be enough to signal improvement. If the RBs average better than four yards per carry even after taking away their longest runs, that makes me feel better about the overall depth of the position.

We've seen Missouri receivers catch passes so we know they physically can. Can they make routine catches and can they make tough catches look routine? With 11 currently on scholarship and three more arriving during the summer, someone will separate themselves from the group. We haven't seen much from practice and what we have seen wasn't particularly impressive. This Saturday is the last chance before the fall to change my mind. Explosive plays are nice, deep bombs taking the top off the defense would be a wonderful change from last year, but making catches in tight coverage is what would make me think these guys have made the necessary jump.

I haven't given up hope on any one of these guys. Chris Black is an alluring choice but I think Richaud Floyd and Johnathan Johnson (if healthy) will push him more than fans might expect. My gut tells me that Emanuel Hall and Nate Brown are the two outside receivers who impress us this weekend. We've already seen glimpses of Nate Brown in Drew Lock's first start.

Hall had solid chemistry with Lock toward the end of last year and is a fluid athlete who can line up all over the field.

Whoever catches 80% of their targets while running crisp routes and making tough catches of imperfect throws gets my vote for starting reps. Maybe that's a lot to ask, I don't think so.

Barry Odom declined to name Drew Lock the starter but by all accounts he's been receiving the most reps with the first team offense. After completing 75% of his passes against South Carolina, Lock failed to complete more than 50% in a game save for the win against BYU. I believe Lock as an NFL-caliber arm, not just in terms of strength but also ability to deliver passes where and how he wants. What remains to be seen is if he can decipher defenses, take what they give him and learn when it's okay to challenge tight coverage. Obviously, some of his growth will be reliant on improved pass blocking and catching from the receivers, but if he can show us Saturday that he has regained his confidence, seven wins doesn't seem impossible.

Not to ignore Marvin Zanders or Jack Lowary but I remain skeptical of both. I think Zanders struggles with consistency and accuracy throwing medium to deep while Lowary looks to be accurate on the short to medium throws I've been able to observe. If either of them prove willing to test the middle of the field, something Mizzou basically forgot how to do last year, I'll give them high marks.

No one has to go out there and put on a Chase Daniel-like performance but completing 65% of their passes while attempting downfield throws (read: not swing or dump passes to the backs) would make the quarterback battle significantly more intriguing this fall.

How much does the Quarterback run?

We already know Marvin Zanders has the speed to be a threat running the ball from the quarterback position, but the staff wants to see if he can use that mobility while forcing defenders to respect him in the passing game. That much was made clear when they gave him a special orange jersey. 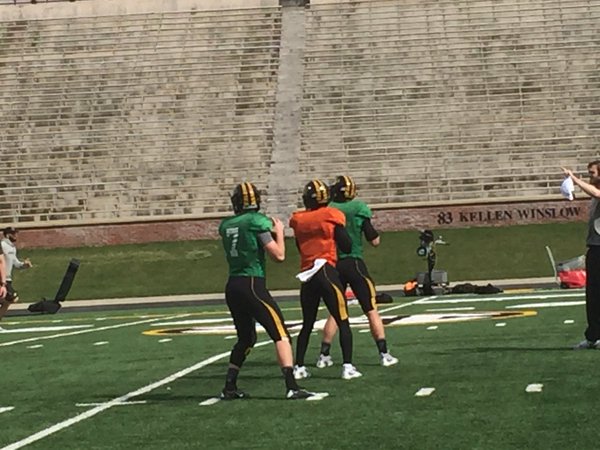 If Zanders can emulate a young James Franklin by being consistent on short to mid-range throws and picking up yards on the ground he'll add a dynamic option at quarterback - one that I think Heupel will be very tempted to use. But if his throwing mechanics suffer while on the move and defenses don't bite on the play-action, can he still be effective?

The same can be said for Drew Lock. We know he can pick up yards on the ground when necessary, but will Josh Heupel's offense ask him to do that? We probably won't see him take any unnecessary risks in a spring game, but he's added weight and has recovered from a late-season shoulder injury that came from that impressive run against BYU.

How much does the quarterback need to run this year, either to supplement the rushing attack, or to avoid pass rushers? Yeah, this is probably lumping two things together but after seeing the highs and lows of last year, you'll have to allow me this.

You might notice everything above has to do with the offensive side of the ball. That's no surprise for anyone who powered through the slog of last season. We know that Missouri's defense can be elite but we also know it can't do this alone. Saturday's scrimmage isn't likely to reveal too much we don't already know, but it offers the promise of hope for a better season. This weekend, die-hard fans will mine every play for pros and cons and by the end will have made up their minds about who should start, how many wins are possible and who should be held responsible.

So I'll repeat what I asked at the top.

What would you need to see Saturday to make you think Missouri wins 7 or more games?