Note: Originally posted in early-September 2015. As the story changes, so will this post.

At some point, I ended up with a key chain, one of those awesome, old-school, strutting tigers with the hats. It was, as far as I can remember, my first real, physical Mizzou thing, something I could bring to school in my backpack. And I did so every day.

Because of general anti-social tendencies, I had already adopted Missouri by this point, despite the Tigers' awful recent record, despite their total absence from televised football, despite growing up around OU fans in western Oklahoma. But there was no internet, no way to keep up with their results beyond reading the tiny box score in the Daily Oklahoman. And at 10, I wasn't even to that step yet. They were a figment of my imagination, and the fact that no one else around me was a fan made them even more appealing.

That key chain was pretty fantastic. I wish I still had that.

My first game. Mizzou beat the pants off of one of the worst teams in Oklahoma State's history, 41-7. My father and I sat on the hill. It was raining, and we watched kids sliding down the hill and impaling themselves on the fence at the bottom.

Mizzou was real now. I had physically touched it. The Tigers were a real team with real helmets and players and fans. And they were capable of blowing out a team with other living, breathing, players on scholarship! I bought a Mizzou starter jacket. It stood out back home.

My second game. Same Homecoming weekend, same result: 42-9 over a bad Oklahoma State team. I was getting used to that walk up Providence toward the stadium, past the frats and the dorms. A freshman in high school, I was coming to realize that Mizzou might realistically be a place for me to go. One day, my father had dropped a casual, "You realize Mizzou has the best J-school in the country, right?" I had no idea until then. It felt like fate.

My first game as a Mizzou student. We walked from Hatch Hall, past the hospital, around the Hearnes Center. Everybody was really excited about the new jumbotron, something that would be painfully outdated within about five years. Mizzou gave up about a million passing yards to Charlie Batch, but Eastern Michigan couldn't even pretend to stop Mizzou's running game. I heard my first "Brock O-Li-Vo (clap, clap, clapclapclap)" chant. I told everyone within ear shot about how Barry Odom and Julian Jones were from Oklahoma, and how their respective high schools -- Ada and Midwest City Carl Albert -- had mauled mine in recent years. (I remembered a Jones punt return score from 1995.) I yelled "BARRY ODOM" every time Odom made a tackle ... which was often. It was hot as hell.

My second home game as a student, which came a week after my First Miserable Road Trip (Kansas 15, Mizzou 7).

My fifth home game as a student.

Barry Odom forces a Joe Germaine fumble, and Carlos Posey picks up and takes it for a score in Columbus. Mizzou leads No. 1 Ohio State, 14-13, and there's a dogpile of freshmen and sophomores in the hallway on first-floor Hatch. In the pregame, Keith Jackson had called my team the "burly bunch from Boone County." My friends and I had already won what was approximately our 114th national title as Mizzou on EA's NCAA Football. In 10 years, I had become a part of something that was once only a figment of my imagination.

My decision to attend all 11 games in 1999 has backfired significantly. That included a fun trip to Memphis, sure, but it had also included a dismal trip to Kansas (21-0), a dismal trip to Oklahoma (37-0), and, on the final Saturday of the season, a trip to Manhattan. Kansas State led 35-0 after one quarter. I got a parking ticket. It was Odom's final game, and it felt incredibly unfair.

During that OU trip, by the way, The Beef and I met. We knew each other from Tigerboard. I knew him as the head of Tigers Lair. I wasn't a fan. I would meet others from Tigerboard in the coming years. Many would come to my wedding. Bill Carter took pictures.

After a desperate re-tooling that included hiring early spread guru Bill Cubit (now Illinois' head coach) as his offensive coordinator, Larry Smith has been canned as Mizzou's head coach. After 1997-98, we just knew a corner had been permanently turned. Fans always do. But after going 4-7 in 1999, Smith's Tigers went 3-8 in 2000, and that was that. As his replacement, new athletic director Mike Alden hires Gary Pinkel. It is not a sexy hire. What about Bobby Bowden's offensive coordinator, that Richt guy? What about Bob Stoops' defensive coordinator, Brent Venables?

Pinkel will last longer on the job than anyone not named Don Faurot. He will win more games than anyone else ever has in Columbia.

We tailgated all night for the Nebraska game. It was an early kickoff, and we were used to a certain number of tailgating hours, so we started about 9pm the night before. We got bored a few times. And, uh, tipsy. At one point, we asked my roommate what he wanted to do. He threw up without wretching, wiped his mouth, and said, "I don't know, what do you guys want to do?" In the early morning, some skanks from Nebraska showed up. If you ever meet The Beef's wife, ask her about them.

(Please don't ask her about them.)

The Beef and I drive to Bowling Green. I was going through a breakup. He was going through some things. Mr. Big's "To Be With You" came on, and we ended up singing along. I have no idea why or how that became a memory to retain 13 years later, but it did. While we were tailgating, a cop came by and told us that we were okay to have fun as long as nobody took a dump on the grass. We laughed. He yelled, "DON'T SHIT ON THE GRASS." This had apparently been a problem before.

Bowling Green, coached by Urban Meyer, absolutely smoked Mizzou, by the way. We had to separate Mizzou fans in the stands who were arguing with each other about receiver usage. It almost turned physical.

I skipped a good friend's wedding because it was the Nebraska game. Some friends attended -- they were actually good, responsible friends -- and had me call and leave them updates. It poured. ZouDave and I made snow angels on the 50-yard line.

We are in traffic, trying to get back to our hotel following a 27-14 loss to Arkansas in the Independence Bowl. Our friend Jay-C is nearly catatonic, blasting Sade and trying to come to grips with how Mizzou's program is in ruins, how recruiting will collapse following this devastating loss to a regional opponent. We make fun of him a lot. He will pass away a little more than five years later, and this will become one of my most lasting, endearing memories of him.

Jay-C is calling me from a bar in St. Louis. It's halftime of the Independence Bowl, and Mizzou is losing by double digits to South Carolina. The patrons in the bar are chanting "Ga-ry Bar-nett (clap, clap, clapclapclap)." I am so appalled by what I saw over the first 1.5 quarters or so that I actually say something to the effect of "I'm not saying Pinkel should be fired, but if it happens after this, I guess I can't complain too much."

I watch Mizzou-Kansas from a dark basement in Columbia. Mrs. Bill C, more wrapped up in this season than she would care to admit, is almost as engrossed as I am. Mizzou builds a big lead, holds on for dear life, and pulls a Sod Reesing. Safety, ballgame, bingo. The Beef, also watching nearly alone at home in St. Louis, calls after the game. Mizzou is about to be No. 1 for the first time in 47 years.

Tony Temple, lots of Shiner Bock, and a great New Year's Day. (My friend Walsh, who had introduced me to Tigerboard nine years earlier, drove with me up to Oklahoma City the day before for the Flaming Lips show, too. That was a great damn trip.)

No more than, what, 30,000 are in the stands with a minute left? Blaine Gabbert has been awful, completely confounded by San Diego State's 3-3-5 defense. He has lost his grasp of where SDSU defenders are coming from, and he's throwing better passes to Aztecs than Tigers. 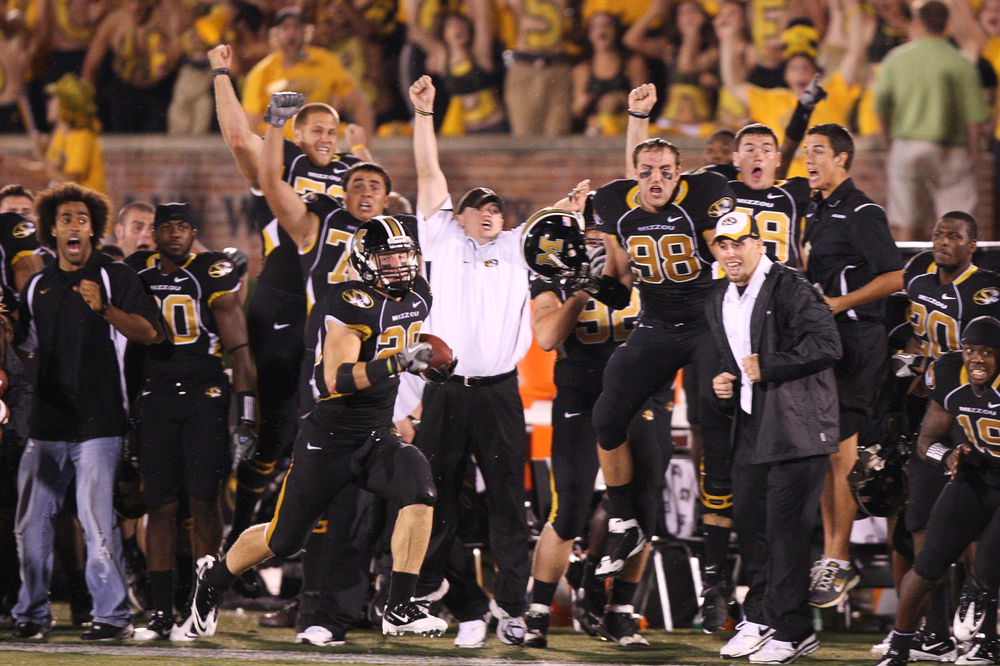 I miss what is, by my count, my third home game in 15 years. Mizzou beats Miami (Ohio), 17-6. My newborn three-day old is not particularly impressed. I am about to start work full-time for SB Nation; the offer came the day after Erin was born. 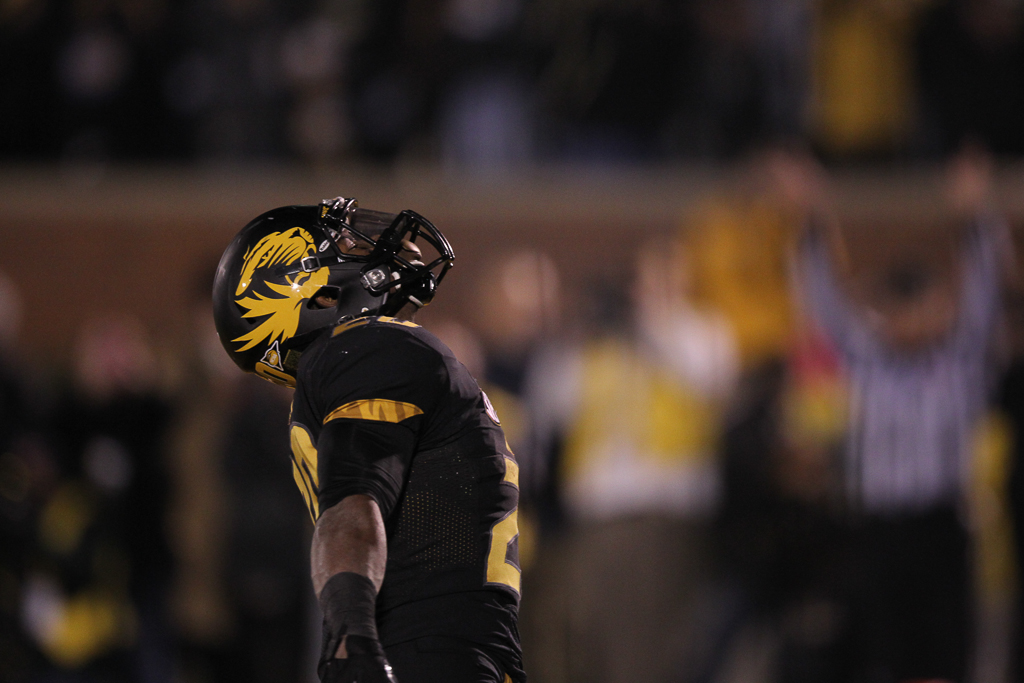 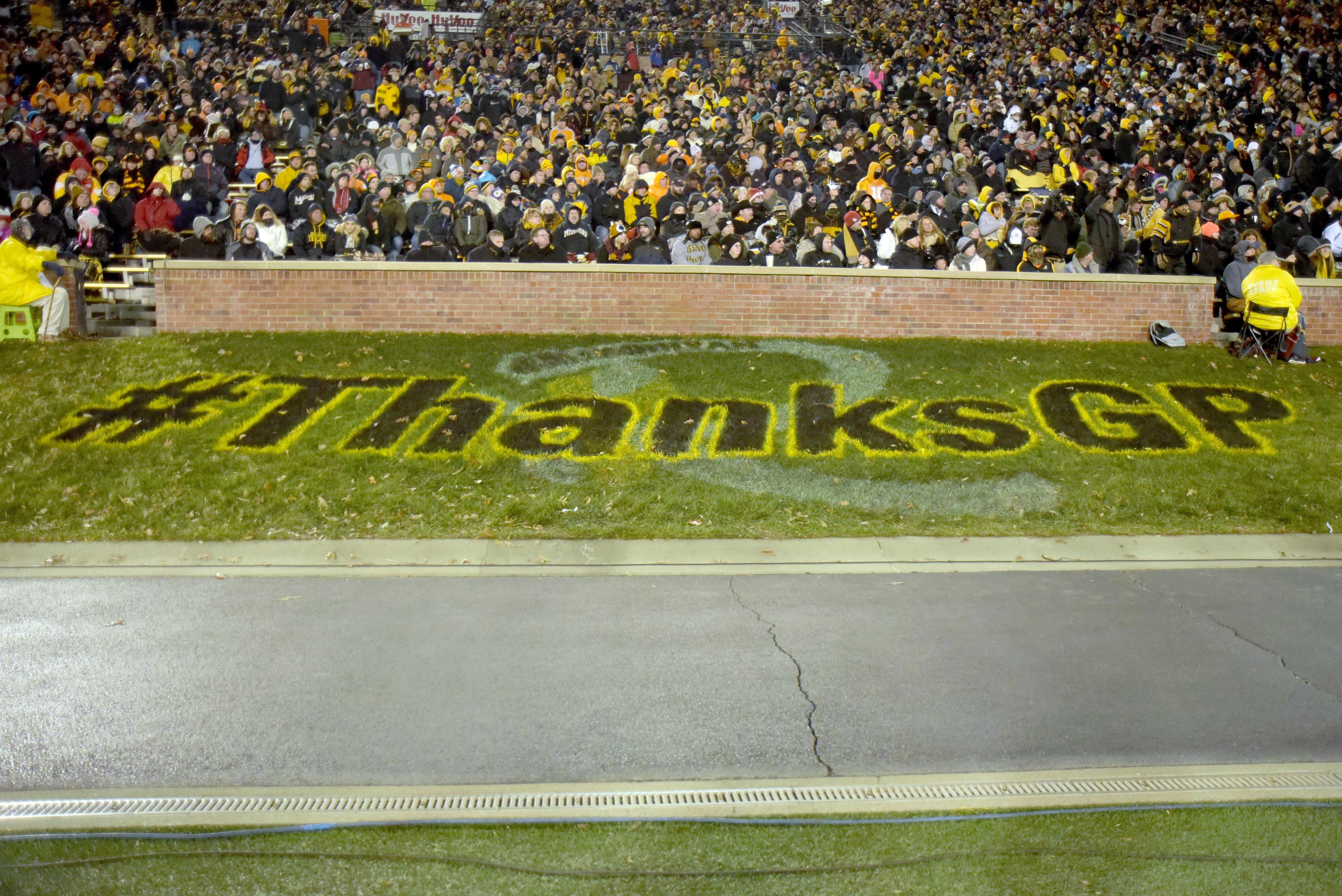 Mizzou went 23-5 in 2013-14, perhaps the most important two-year stretch of Gary Pinkel's tenure. But the offense has collapsed in 2015. And following a month of stressful, incredible events -- the Thursday night loss to Mississippi State in maybe the wettest game of his tenure, the team's announced (and short) boycott in solidarity with racial protests on campus, Pinkel's unwavering support for the group, the announcement that Pinkel has lymphoma and will be retiring at the end of the season, the dramatic comeback win over BYU at Arrowhead (which moved the Tigers to 5-5, keeping bowl hopes alive) -- Pinkel's final home happens years before he, or we, expected. But after brief moments of life in Kansas City, the offense simply has nothing to offer. The Tigers fall, 19-8.

I have no idea whether Odom will succeed or not; my hunch is yes, simply because he's been great in basically every job he's had (on the field and off) for the last two decades. But I'm biased -- his hire has tied my story together with a bow.

My story is not your story, my book is not your book. Our stories may have overlapped -- particularly in the last month or so -- but they are still our own personal stories, seen from our own eyes.

Every season, every new hire, is a new chapter in what is hopefully a very long book for each of us. Maybe we're lucky enough to enjoy it from Columbia, or maybe we're trying to keep tabs on everything from faraway places, closing our eyes to remember the sound of the crowd, the words to the fight song, the taste of Shakespeares. Believe me, not an autumn Saturday goes by when I don't realize how lucky I am to still live in Columbia, with this job no less. So many would kill to still be able to attend six to seven Saturdays a year at Memorial Stadium. Many would settle for one per year.

Not every chapter is happy, and not every chapter is sad, but that is not particularly important. When we're telling our story, we won't be telling the tale of every game or every year. Certain moments will stand out, and others are footnotes at best. Every story is rich regardless.

Each new season could be the most incredible chapter yet. Some will end up forgettable, a 2011 sandwiched between 2010 and 2013, a dour 2000 between 1997 and 2003. But whether you're a 50-year season ticket holder or a 13-year old prepping for your first Mizzou game, whether you've been to one game or 114 (by my count) or 200-plus, whether you're following from time zones away, whether you sit on the east side or west side, whether you've been around for years of misery, whether a 5-7 record in 2015 is your version of rock bottom, the story is what matters.

We are all family members, and we all have our own stories to tell. But even the bad chapters are great because they are ours.

Gary Pinkel retiring due to battle with lymphoma