Sean Weatherspoon is ready to reintroduce himself to the NFL.

Share All sharing options for: Mizzou great Sean Weatherspoon is ready for a fresh start in Arizona

Sean Weatherspoon just wants to go 1-0 today. Same as he did yesterday, same as he will tomorrow.

"They gave us a shirt last year when I was in Atlanta that says ‘1-0,’" Weatherspoon said. "I just want to attack this day. If I can win this day, it gives me confidence to get up the next day and go after it again."

It’s much easier to win some days than others, something that has been reaffirmed to Weatherspoon time and time again.

During his Missouri career, when he was putting together three first-team All-Big 12 campaigns amidst an unprecedented run of on-field success for the Tigers, it was easy to go 1-0. Same for the early years of his professional career, when the Atlanta Falcons chose him in the first round of the 2010 NFL Draft, 19th overall, and he became a regular starter and team captain by his third year in the league.

Other days are more difficult to salvage. The days he spent rehabbing the foot injury that cost him nine games in 2013 and the ruptured Achilles tendon that forced him to miss the entire 2014 season, the last year of his contract with the Falcons. The days spent grieving the loss of both of his grandparents, who passed away over a three-week stretch in May.

But to Weatherspoon, you can’t take the good without the bad. The adversity makes the rewards so much sweeter.

Heading into his first year with the Arizona Cardinals, Weatherspoon is optimistic because he’s been able to stay mindful of the things that matter to him — faith, family and football.

They’re the things that help him go 1-0.

"Every morning when I wake up, I thank God for another day. Because I know someone else laid down, and they didn’t get a chance to get back up," Weatherspoon said. "I don’t take it for granted."

Weatherspoon, like so many other top players of the Gary Pinkel era, was an unlikely star for the Tigers.

He was a little-known recruit out of Jasper, Tex., a skinny kid short on size and long on the sort of athleticism that usually catches the eye of Pinkel’s staff. The only thing Weatherspoon knew about Missouri was that he liked playing as the Tigers and waxing opponents with Brad Smith on his NCAA football video game. By the time then-defensive coordinator Matt Eberflus got Weatherspoon in for an official visit in December 2005, the linebacker had already committed to Houston.

Weatherspoon told Pinkel as much when he had his first one-on-one meeting with the head coach Dec. 10, while the rest of the weekend visitors took in the men’s basketball team’s win over Texas A&M-Corpus Christi. Pinkel didn’t mind that Weatherspoon was already committed. He also saw something bigger in Weatherspoon’s future.

"He subtly said, ‘I think you’re a Big 12 guy,’" Weatherspoon said. "I wanted to play in the Big 12, but I thought I would play somewhere in Texas. That didn’t work out for me. He told me I was a Big 12 guy. That kind of stuck with me. I was like, ‘You know what? This guy seems alright.’"

A few weeks later, Weatherspoon was walking around a sporting goods store at a mall in Beaumont and spotted one Missouri sweatshirt nearly lost among a sea of apparel from other schools. 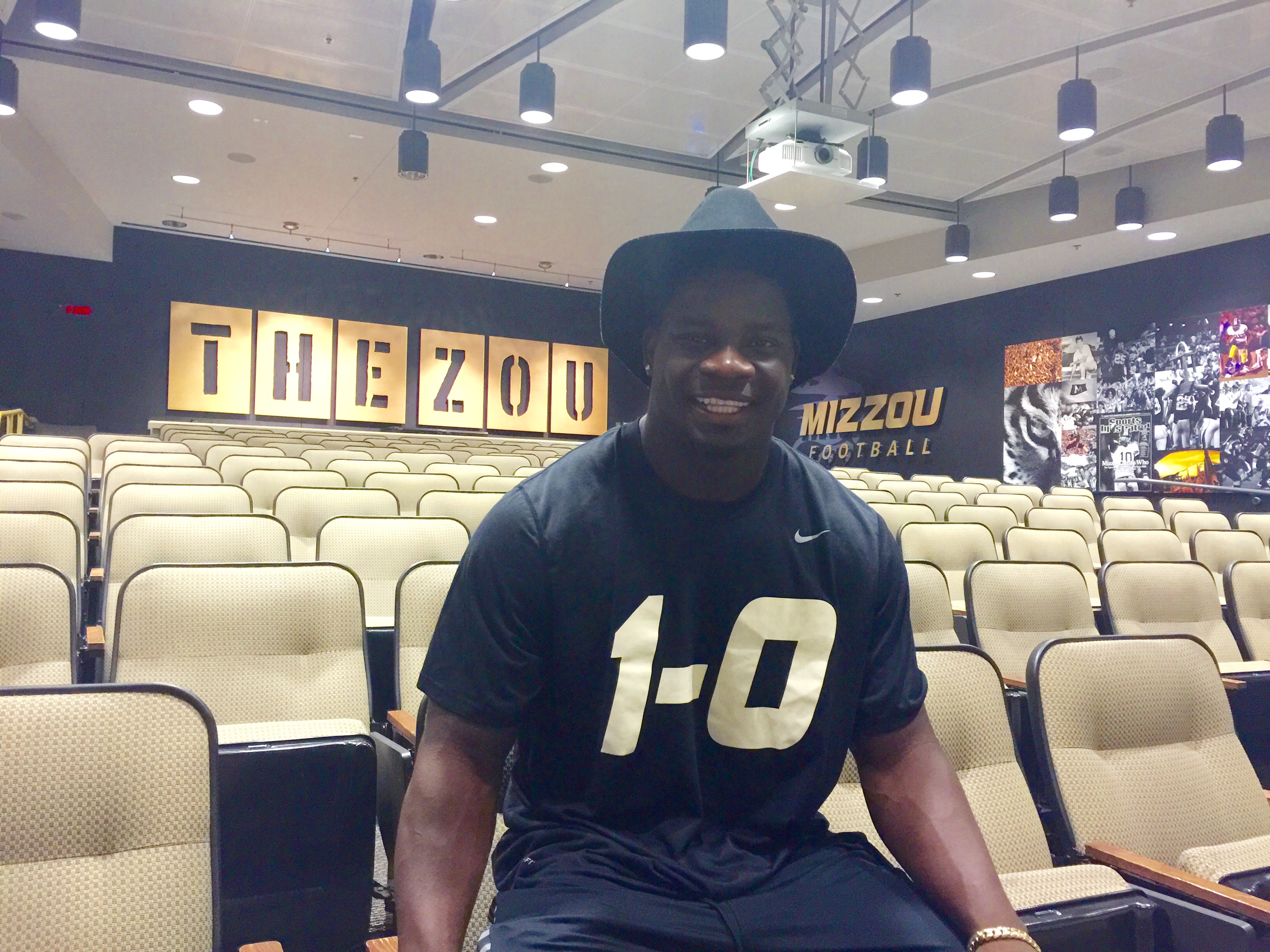 He changed his commitment the day after Christmas.

"Ever since then, I’m just thankful I made that decision and the Lord led me to this decision," Weatherspoon said. "It wasn’t a mistake that I came here. I really enjoyed it and loved it. When I talk to kids, I don’t say, ‘You should go to Mizzou.’ I tell them, ‘You want to go to a place where you feel like you’re something special.’"

Missouri was that place for Weatherspoon. He was one of the team’s top special teams players as a true freshman in 2006 and worked his way into a starting role the next fall, leading a 12-2 team with 130 tackles. He was a Butkus Award finalist for the nation’s top linebacker in 2008, racking up a total of 155 tackles that still ranks second on the Tigers’ all-time, single-season list and finished his Missouri career with 413 stops, good for third in program history.

To Weatherspoon, the way Pinkel and his staff treated him off the field was just as important to him as his on-field success.

"I think it’s taught me how to respond to adversity, be a leader and become a man, basically. I feel like the coaches here treated us as not just a kid that’s here to meet the quota. It was personal. That really sticks with me because, when I’m working with kids at other guys’ football camps, my own football camp or working in the community, I really take it personally. I try to get involved, show the kids that I truly care about them. Because someone showed me that way."

Weatherspoon said that support from Missouri has extended into his professional career. He keeps in close contact with Jeremy Maclin, Danario Alexander, Kevin Rutland and other former Missouri players through a group chat he calls "The Network." He and Maclin, the receiver who signed a five-year deal to join the Kansas City Chiefs in March, used Missouri’s facilities to train over the summer.

Weatherspoon said his professional teammates have told him that’s not a common occurrence at their alma maters.

"It goes back to that love and family. The fact that I can come back in here, work out and nobody’s saying ‘Oh you can’t work out here’ or ‘Who are you?’" Weatherspoon said. "I’ve still got my pictures on the wall. A lot of the people in the building are the same people as when I was here. It’s about that carryover, comfortable atmosphere. A lot of places, you can’t go back like this. They take care of us."

Weatherspoon reconnected with former Missouri teammate William Moore in Atlanta, and they became two of the Falcons’ most dependable defensive players in 2011 and 2012. The Falcons made the playoffs both years and advanced to the 2012 NFC Championship Game.

Then injuries cost Weatherspoon most of the next two seasons, both of which ended in losing records for the Falcons. Coming off of the Achilles injury, his contract ran out, and he found himself a free agent. Teams came calling, including the Dallas Cowboys and their familiar linebackers coach: Eberflus.

Weatherspoon signed a one-year deal with the Cardinals in March. He and his family — his fiancée Christine, his four-month old daughter, and their bulldog — are settling into their new surroundings.

He said being a new father has helped keep things in perspective. While his family was in Columbia, he’d take walks with his daughter to show her the sights from his college days.

"She keeps me going. She gives me that meaning," Weatherspoon said. "When I wake up, I don’t have to think about, ‘Aw, I have to get up today.’ I wake up, see her little face and think, ‘I’ve got to do what I’ve got to do. I’ve got to take care of this baby girl.’ That’s my focus."

Entering his sixth season in the NFL, he’s ready for a fresh start.

"I’m just taking it as a great opportunity for me to go out and get a chance to play again. I just want to reintroduce myself to the league, let them know that I’m back and ready to go," Weatherspoon said. "I had a chance to go to a few more places that I dreamed of playing for those teams when I was a kid. It was a tough situation, a tough decision to make. I prayed about it and made the right one."

Defensive tackle Corey Peters, one of his Atlanta teammates who came into the league the same year as Weatherspoon, also signed with the Cardinals, so he has at least one familiar face. And Weatherspoon feels as if he played an instrumental role bringing in another: rookie outside linebacker Markus Golden.

The Cardinals’ front office was looking hard at Golden and leaned heavily on Weatherspoon’s opinion. Arizona took Golden in the second round, 58th overall.

"They know I didn’t go to school with them, but they know I can get the skinny on them," Weatherspoon said. "I feel like I made the pick. It’s about the love. He has a passion for what he does. That’s a lot like me. If you watch me play, you think the same thing. I can just tell that Markus really loves the game. He’s about going out there and doing his job and continuing to grow so he can be the man he wants to be. He’s well on his way."

If all goes well, Weatherspoon can see himself playing six or seven more years in the league. He always circled a 12- or 13-year career as a goal. After that, he’s got plenty of ideas.

He’s got some investments that are coming along. He has a keen interest in learning more about audio engineering and could see himself dipping his toe into the music business. He has become friends with ESPN anchor and Missouri alum John Anderson and could see himself becoming a sports broadcaster.

Who knows? He could end up sitting in the same office he walked into that December day 10 years ago.

"I might be coming for Pinkel’s job someday," Weatherspoon said, with a laugh. "He’s loving it. He’s not going to be going anywhere for a while. But I’d love coming back and being any help that I could.

"He’s so upbeat. Everybody has their battles. Coach Pinkel went through some things and it was tough for him. He just seems like he’s in such a great place. I’m so happy to see him happy."

Weatherspoon can relate. His road to where he is today has not been without its detours and setbacks, its stops, restarts and times both triumphant and tough.

He can handle it, though. He just has to think about being 1-0.

"That’s one thing (longtime Missouri assistant coach) Andy Hill always said: ‘Enthusiasm is free.’ That’s the truth. And if you have fun doing what you love, the sky is the limit. I’ve got a great gig. I’m grateful and excited about the next step."​