Efficiency issues? Sure. But Maty Mauk made the throws he absolutely had to make in 2014.

Here are 5 Mizzou things for your Saturday. Maty Mauk is #clutch, and rest in peace, Curtis Brown.

Share All sharing options for: Efficiency issues? Sure. But Maty Mauk made the throws he absolutely had to make in 2014.

Around the country, only California’s Jared Goff threw more fourth-quarter touchdowns. (He threw 10). And nobody had a better TD-INT ratio in the fourth quarter than Mauk’s 9-0. Among QBs from the power conferences who threw at least 50 fourth-quarter passes, only eight had a better fourth-quarter rating, including Oregon’s Heisman Trophy winner Marcus Mariota.

"He's remarkably good under pressure," Pinkel said. "We need more consistency from him. He knows that. This will be his second year starting this year. But there's also the receiving corps, the offensive line, running backs, everybody else that has their role in being successful."

Mizzou did a really nice job of catering to its defense and leaning heavily on the run as Mauk struggled with both a depleted receiving corps and an injured shoulder. The gameplan was basically to have a chance to win heading into the fourth quarter, then have Mauk make a couple of killer throws to finish the job. His season stats weren't great, but he made just about every one of those big throws, from the fade to Bud Sasser that put the Vanderbilt game away to the bombs to Jimmie Hunt against Tennessee and Arkansas. This approach has a low margin for error, and if there's any slippage from the defense this year, it might be an impossible recipe to replicate, but kudos to Mauk for making the throws he absolutely had to make.

2. Bud's got a job with the Rams if he wants one

A job, not a spot on the roster.

One cool note: Bud Sasser is guest of the team this weekend, checking things out, observing various jobs. A job with team his if he wants.

The Trib: Former MU back Curtis Brown dies at 60

Curtis Brown, a former Missouri running back who went on to play seven years in the NFL, died Thursday afternoon at Christian Northeast Hospital in St. Louis. He was 60.

Art Holliday, an anchor and reporter at KSDK-TV in St. Louis and former high school teammate of Brown, said Brown was being treated for "football-related dementia" when he suffered a heart attack Saturday.

"I got four concussions and when I was in New England, all I had was strobe lights," Brown said, describing the light show brought on by another football concussion."

"We really think of the reported concussions like the four that Mr. Brown reported, as potentially the tip of an iceberg," Dr. Brady said. "There might be a lot under the surface that we don't know about."

Brown was an all-state running back at St. Charles High School. In 1976 at Mizzou, Brown starred in the Tigers road upsets against Southern Cal and Ohio State. Both teams were ranked in the top 10. Former Mizzou quarterback Pete Woods remembers Brown's dazzling performance against USC.

And here's something I wrote about the 1976 win over USC:

Mizzou fans hadn't seen anything yet.

The craziest season in Mizzou history started with a bang--with Mizzou waltzing into the L.A. Coliseum and not only upsetting a Top 10 USC team, but thumping them.

It all went right from the start. In strangely rainy conditions, USC's opening drive ended with a botched punt snap, setting up an easy Mizzou TD. After the Trojans responded with a TD of their own, Curtis Brown took the ensuing kickoff 95 yards for a touchdown. Mizzou led 13-7, and they hadn't thrown a pass yet. Mizzou led 16-10 when Steve Pisarkiewicz found Leo Lewis for a 20-yard score with 2:15 left in Q2, and it looked like Mizzou would take a 23-10 lead into half. Nope. USC would have to punt, and Brown took a swing pass 49 yards for another score and a shocking 30-10 lead. It was 33-10 when Lewis applied the dagger, taking a reverse 24 yards for a touchdown.

This was not just a run-of-the-mill upset. Not only had Mizzou handled the wet conditions better than USC, but they were faster than USC as well. New Trojan coach John Robinson's tenure had not started as planned; had Mizzou taken advantage of an overrated team? Nope. USC would win the final 11 games on their schedule and finish #2 in the country--this was an outstanding team, and Mizzou had squashed them like a bug.

Brown was No. 25 in this classic Savitar picture of the moments of celebration following the 1976 win over Ohio State. He was an awesome player and an awesome representative of the university, and it sounds like his post-football life wasn't incredibly easy. May he rest in peace. 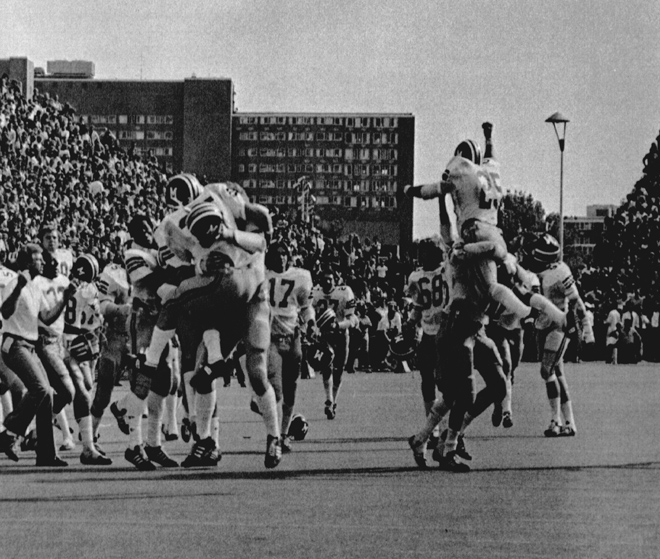