No. 20 Tigers gets defensive, muzzle Bulldogs

The Lady Bulldogs were not intimidated by the ranked Tigers visiting their home court. By the end of the third quarter they were leading by two points, showing the Tigers they could hang. The final quarter however, resulted in the ranked Tigers taking the victory, 54-48.

No. 20 Tigers gets defensive, muzzle Bulldogs

The Tigers trailed by five early in the fourth quarter but the Bulldogs imploded down the stretch, going scoreless for 6:22. Cierra Porter’s layup put the Tigers in front 44-43 with 3:57 left, followed by back-to-back Jordan Frericks’ baskets. After a Georgia 3-pointer cut Mizzou’s lead to 50-48, the Tigers clinched the win from the free throw line in the final 17 seconds. Porter and Frericks each scored 11 points to lead the Tigers. Sierra Michaelis added eight points.

"We bent there a little bit in the third quarter," Missouri Coach Robin Pingeton said during her postgame radio interview on KTGR. "It would’ve been easy for us to kind of unravel completely. We did a little bit, but we hung in there, and we stayed the course and got a big win for our team."

Mizzou went on a 10-0 run in the middle of the fourth quarter as the Tigers outscored the Bulldogs 16-8 over the final 10 minutes. Porter put Mizzou ahead for good at 44-43 with a layup at the 3:57 mark.

No. 20 Missouri edges by Georgia

Missouri women's basketball improves to 14-1 after a 54-48 win over Georgia.

Watching the highlight clip above, one of Georgia's best players tried to trip Sophie Cunningham near the end of the game and was called for a technical foul that helped Mizzou seal the game.

Men aim for bounce back vs Auburn

I'm just including this photo because I always really enjoy these shots. 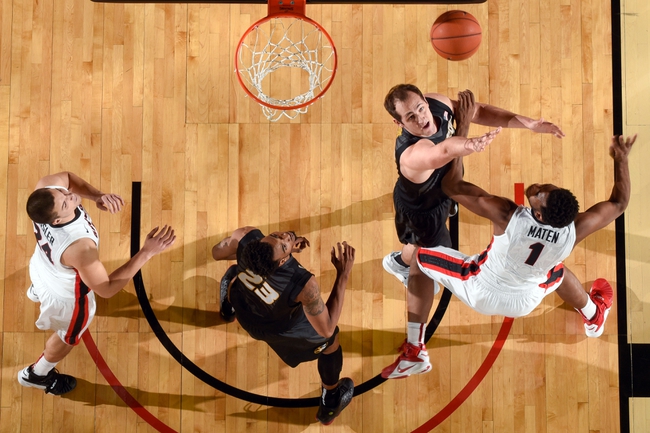 Against any team with a pulse, Missouri is down 10 at the opening tip

Against any team with a pulse, Missouri is down 10 at the opening tip

Other Auburn injuries include Tahj Shamsid-Deen, whose dislocated shoulder has him sidelined indefinitely and T.J. Dunans, who is out for multiple weeks while he nurses a bruised knee. Fellow guard Danjel Purifoy remains academically ineligible.

Auburn ready to run with Missouri

"It’s an important game, two teams picked in the lower half," said Pearl, referring to the SEC preseason media poll, which saw Auburn predicted to finish 10th while Missouri was projected to finish in the conference cellar at 14th. "These are the kind of games where we’ll have an opportunity." Pearl said picking up a win at Mizzou Arena would mean even more when placed in the context of last season's game. In that contest, Auburn led 61-54 with 3:04 remaining before Missouri finished the game on a 9-0 run to take a 63-61 victory.

A video from Utah State's YouTube gives us a brief glimpse of Mizzou's new OC coaches up the QBs. He focuses a lot of form and technique, specifically the QB's feet which I thought might have been Drew Lock (and Maty Mauk's) biggest problem last year.

Jordan Clarkson puts Seth Curry on skates, drives and puts it in pic.twitter.com/fJ4y78NK8o

Missouri OL Connor McGovern has been invited to the NFL Combine. He's going to destroy that bench press.

Golden played in 15 games (six starts) and racked up 31 total tackles, four sacks and forced two fumbles. He also led the team and ranked 15th in the league with 24 quarterback hurries. His rookie season has been recognized. Mel Kiper of ESPN named Golden as one of the starting outside linebackers on his All-Rookie Team, released Thursday in an Insider piece.