We've raised more than $23,000 for the MU Children's Hospital and become Best Bros with Mizzou's softball coach, and it all started with a silly Internet meme. Let's do even more this year.

So, this is the fifth time we’ve done this, and it’s always started off the same. I tell the Tremendous Stubble story — and don’t get me wrong, it’s a great story, you should go read it from last year — to get you nice and lathered up for some charity gambling, and then we launch into everything.

This is the Internet. Staleness is death.

So, to trick things up a bit — and because SB Nation is always on the cutting edge (thanks, SB Nation!) — I present to you:

In May 2010, we were having a Rock M Nation Roundtable — basically, a bunch of us e-mailing back and forth about Mizzou topics.

One of the questions posed by Bill C.: "Name the person from your school (current or former player/coach/whatever) that you wish was on Twitter more than anybody else, just for the potential day-to-day entertainment prospects?" I thought very hard about my response.

My response, one that still lives in infamy: Mizzou softball coach Ehren Earleywine. Why? Because look at this guy

It was glorious. And I expressed such by replying:

"Hey. I’m Ehren Earleywine. Yeah, my name's spelled a little funky, but what I lack in normal namehood I make up in tremendous stubble."

"tremendous stubble" became "Tremendous Stubble" became #TremendousStubble. We pretty much ransomed coach Earleywine into acknowledging us on the radio, and in return, we grew beards. It was really dumb, but the start of something great.

That doesn’t mean we’re still not totally Best Bros with coach Earleywine. We are. He’s the best, and as soon as he returns our phone calls, we’re totally going to bro out.

But now it’s about so much more. Specifically, this:

For the fifth consecutive year, we’re proud to raise money for the MU Children’s Hospital, which does tremendous work in helping make sick kids not sick. I’m not sure how it all works — some science-y type stuff — but trust me: kids go in there sick, and then they leave and they’re not sick. Like magic. And our money goes to help them get not-sick.

Here’s the deal: you pledge a certain amount for every game that the Mizzou softball team wins in the Women’s College World Series. If you’ve didn’t know, Mizzou is once again hosting a regional — ‘cause Stubble — and they kick off WCWS play on Friday.

For your wagering purposes: To win the national championship, the Tigers would have to win no fewer than 10 games, and no more than 12 games.

And then there’s prop bets. I’m not sure if you’ve ever been on this blog or read the comment sections, but these Internet people love to gamble. Like, really love to gamble. I could be sitting in my office in Dallas by myself and whisper to myself, "I bet it’s going to rain tomorrow," and six commenters would be in my office within 10 seconds yelling about odds. It’s weird.

So as soon as we started this, people started placing prop bets with the charity drive. Things like $1 for every strikeout or $5 for every home run or "$20 for a scene involving tears or crying (out of despair, not triumph) from a Kansas player(s)" — you laugh, but I literally copy/pasted that from last year, someone actually bet that, y’all are sick.

So, yeah: go nuts with the prop bets. This is supposed to be fun, so have fun.

As always, we ask that you announce your pledge in the comment section. It helps us keep a running total of how much money we’ve raised, and we also send a singing telegram to coach Earleywine every year telling him how much we raised. Last year, he didn’t even bother with the restraining order! Progress!

If you’ve never commented before, we invite you to create a free account. Plenty of people have joined the community specifically through this thing, and you’ll find that it’s a very nice way to get yourself involved in RMN.

It doesn’t matter how much you give. I am a writer, so I cannot give much. The Beef is a higher-up in a government intelligence agency with top-level security clearance, so he can give a lot. Was I not supposed to say that, Beef? I feel like I wasn’t supposed to say that. Oh well!

The point isn’t how much you give; it’s that you give.

With that, I once again have the distinct pleasure of kicking off the Fifth Annual Rock M Nation Tremendous Stubble Charity Drive with the first pledge:

I, ghtd36, pledge $5 for every Mizzou victory in the Women’s College World Series, and an additional $1 for every strikeout by a Mizzou pitcher.

Don’t worry about this for now; we settle up after this whole thing’s done and coach Earleywine is calling us asking if we want to hang out with him and the national championship trophy (THE ANSWER IS YES, COACH, WE’LL BE RIGHT OVER). We’re donating directly to the MU Children’s Hospital, because they can send you a charity receipt for tax purposes. I don’t understand how any of that works. I just hand the paper to my wife and say "MAIL CAME, WHERE FOOD".

I always love this part, updating everyone on the progress of this silly little Internet meme-turned-heartwarming story of softball coach becoming Best Bros with nerds-turned-charity drive.

Here’s the numbers to date, direct from the MU Children’s Hospital:

TWENTY-THREE THOUSAND DOLLARS OVER FOUR YEARS. FOR AN INTERNET MEME ABOUT A COLLEGE SOFTBALL COACH.

And, of course, we’re not without our rewards. Yes, the whole "making children’s lives better" is nice…but then there’s this:

The Rock M Nation Tremendous Stubble Drive Lactation Room. That is in that hospital forever. You crazy, Internet.

Last year, we fell a bit short of our goal of $10,000. So let’s make that the goal again. $10K would go a long way toward our secret evil plan of getting the entire hospital named after our stupid blog.

The only way we raise as much money as possible is if this thing goes viral. That’s where you can do the most damage: post this on Facebook next to your crazy uncle’s conspiracy theories; post this on Twitter after Clay Travis’ latest misogynistic contrarian rant; post this on Instagram and Pinterest and SnapChat and all of those other social media platforms I’m too old for.

Use the hashtag #TremendousStubble, of course.

And root for Mizzou. As I’ve said in the past, this is a rare opportunity when Mizzou victories do actual, tangible good in the world. That, and Kansas losses. So, yeah.

But in all seriousness, we’ve found a way to parlay a silly Internet meme into a way to both root for one of Mizzou’s most underappreciated teams and raise tens of thousands of dollars for sick kids. Hard to beat that.

As always, we conclude with a photo from the MU Children’s Hospital website to guilt you into donating:

(And, as always, we’re really sorry about all of this, coach Earleywine.) 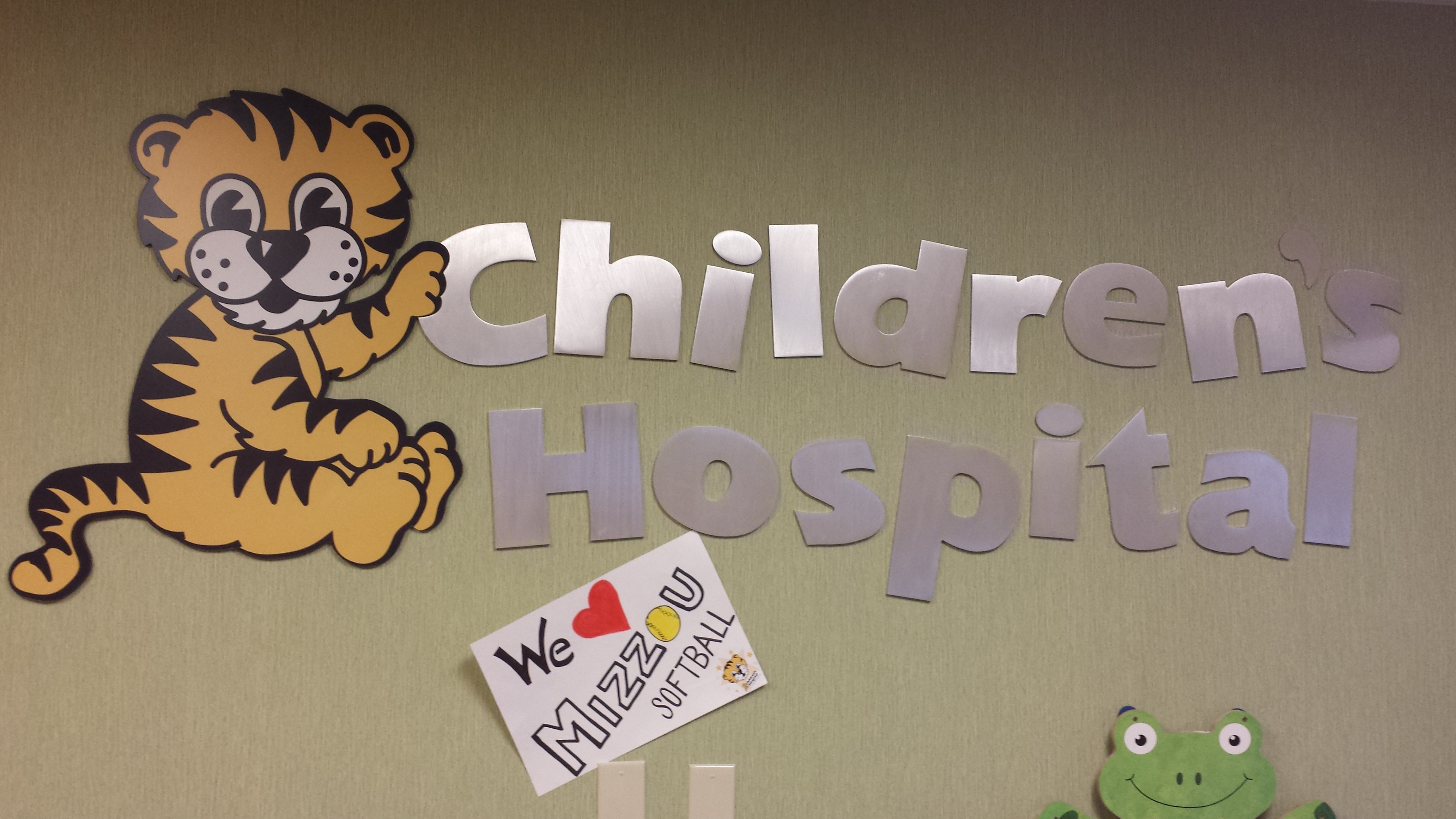 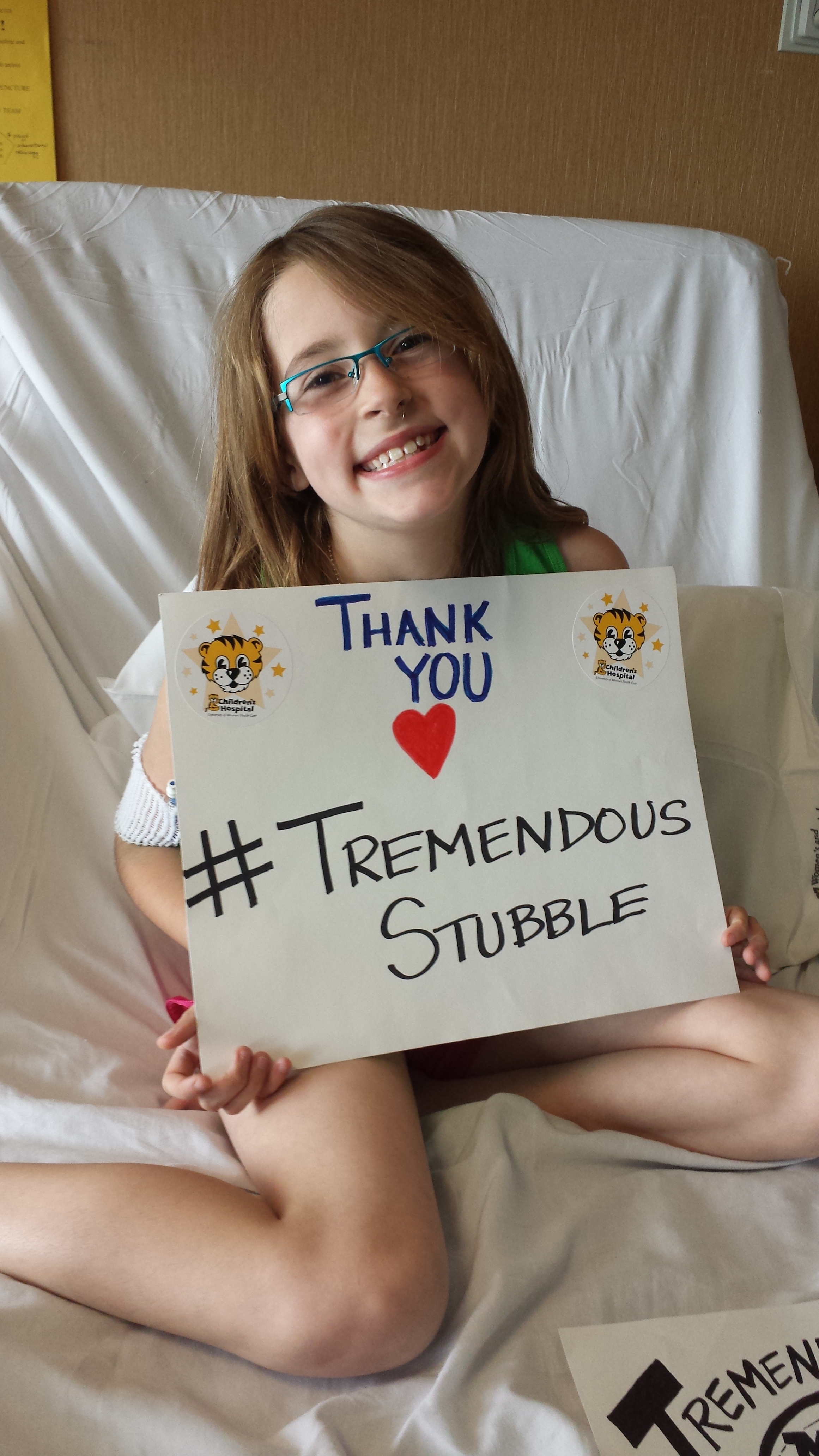 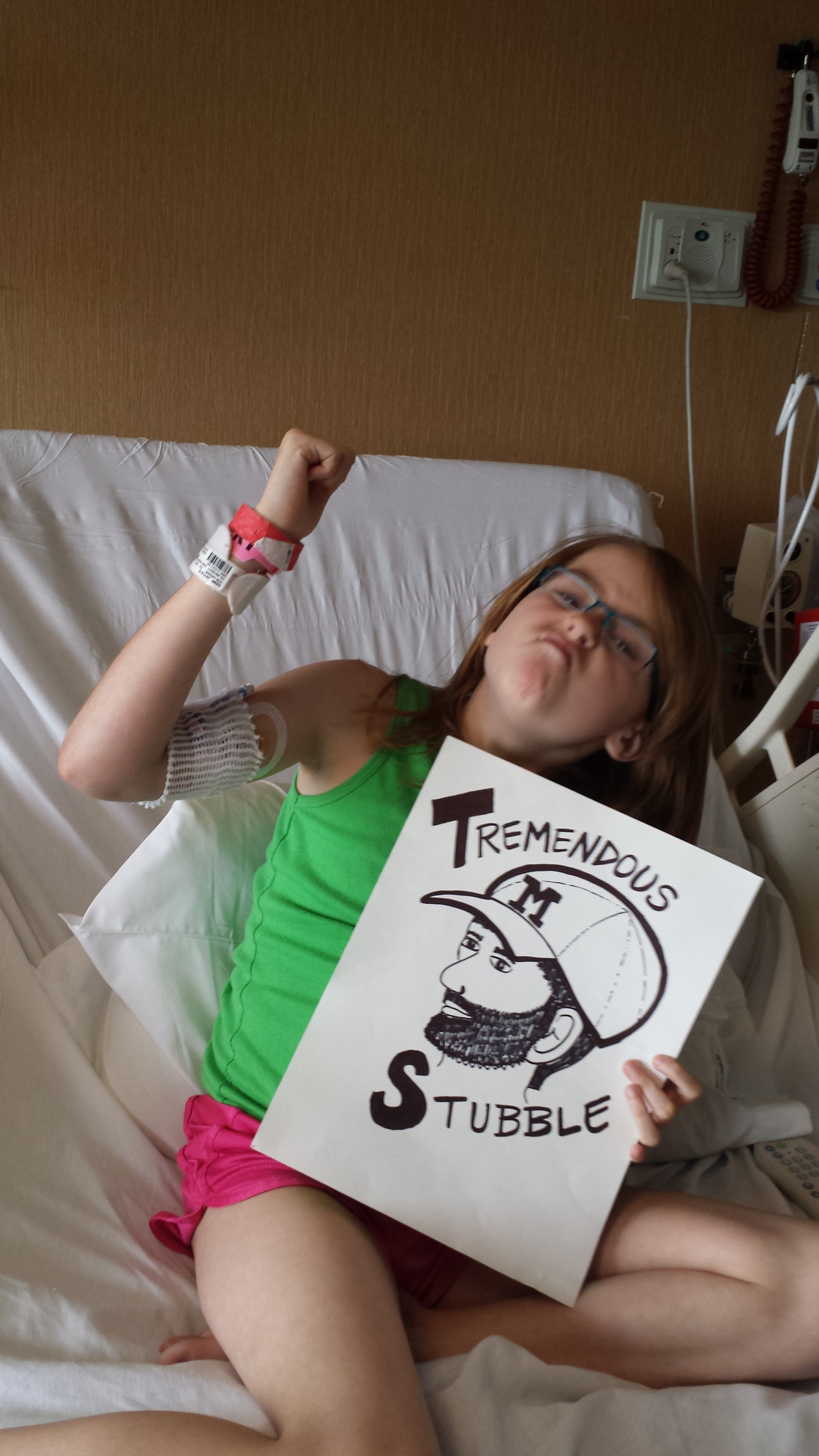 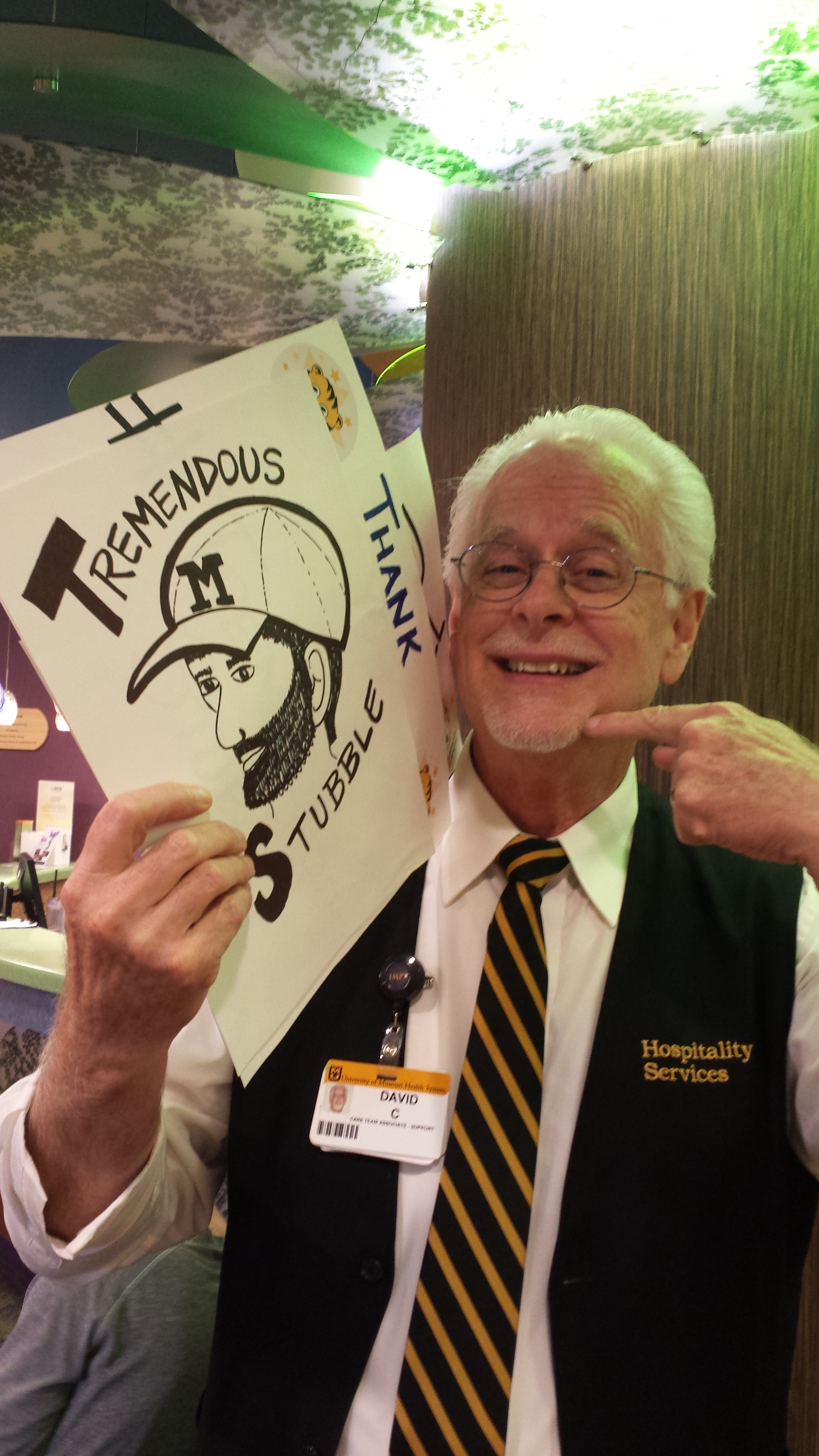 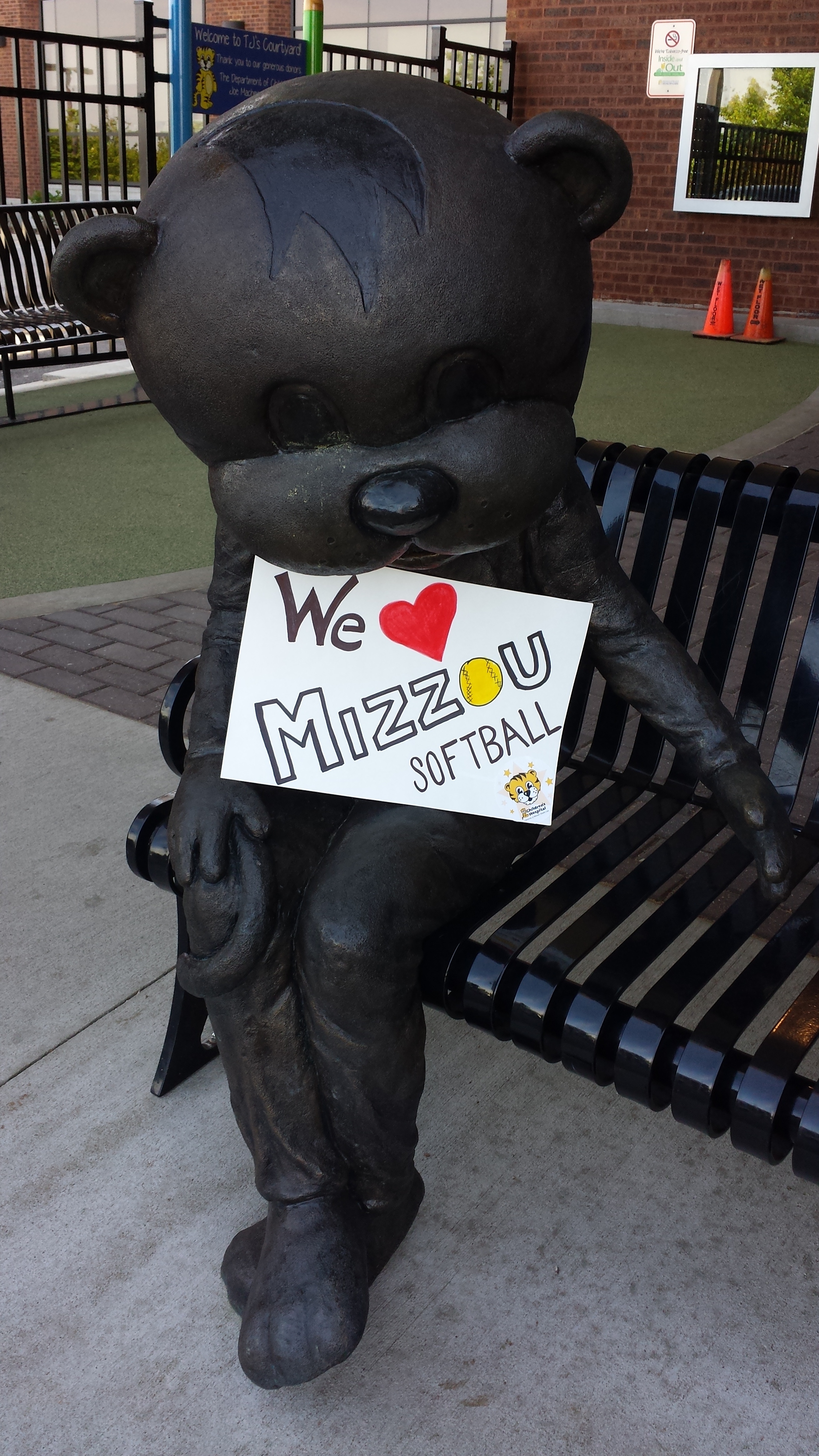