So you're smack in the middle of conference play, and you're doing well. You're two wins away from your first Big Six title. You just whooped a Top 10 team. What better time for a trip to New York??

The scheduling of this matchup could have been inconvenient, but all things considered, it was pretty perfect. Mizzou had carried the reputation for an explosive offense since the beginning of the season, but only recently had they shown it. They had scored just 23 points against Ohio State, Wash U., and Kansas State, but their beautiful run-pass mix had killed Iowa State and Nebraska to the tune of 48 points. The upcoming game at Yankee Stadium was shaping up to be the perfect "Hello, world!" moment if Mizzou could handle the spotlight better than they had when they went to Columbus a month earlier.

In 1939, the NYU Violet, long striving for respectability, were starting to get somewhere. With widely respected QB Eddie Boell--their leading rusher and passer--and star halfback Al Campanis (yes, that Al Campanis), the Violet, under coach Mal Stevens, started the season 5-1 with at least one solid win--14-13 over Georgia. Their most impressive effort, actually, came in their lone loss, a 14-7 loss to a pretty solid North Carolina team that would reach as high as #7 in the country in '39. NYU had crept into the AP rankings at #17 but were still seen as underdogs to the visiting Tigers. They were also banged up on the line. But with Boell and a now-healthy Campanis, they thought they would have a shot.

The week of the game, The New York Times ran article after article about Paul Christman and the explosive Missouri offense and whether NYU could stop them. A sample:

The victory of Missouri over Nebraska and the celebrity of Paul Christman as one of the great passers of 1939 throw the spotlight upon New York University and the game at the Yankee Stadium this week. Here is one of the prize attractions of the campaign and the opportunity for Dr. Mal Stevens's smart, virile eleven to gain the recognition that its adherents think is well overdue.

Considering this was taking place in "the paper of record," there is no better exposure than that. (Other than positive post-game press from the NY Times, anyway.) Plus, needless to say, with the well-hyped game being at Yankee Stadium, major syndicated writers like Grantland Rice would be on hand. Mizzou had everybody's attention, and it was time for them to dominate.

Correction: it was time for Pitchin' Paul to dominate.

Early on, though, this was a battle. Mizzou struck first with an effortless 67-yard opening drive for a score. Christman completed a 23-yard pass on the game's first play, and then Bill Cunningham took over. Christman scored off-tackle from the 2, and after a missed PAT, it was 6-0 Missouri.

The Violet, however, immediately struck back. NYU ate up much of the late portion of the first quarter and the early part of the second in marching 72 yards for a touchdown and a 7-6 lead.

Mizzou kept marching forward, with miscues the only thing getting in their way. Following NYU's TD, they advanced to the Violet 14 but missed a field goal (if you couldn't tell, kicking was quite the dicey proposition 70 years ago). They advance again to the 14 on the final play of the half, but a desperation pass by Christman was picked off. NYU was no longer able to move the ball on offense, but they maintained a tight 7-6 lead at halftime.

With the way the Mizzou offense was rolling, though, it was just a matter of time until they took the lead. Early in the third quarter, they made their move. On a drive spearheaded once again by Cunningham and just one pass, Mizzou advanced to the NYU 15 when Christman scored on a gorgeous cut-back run, avoiding just about every Violet defender at one point or another. From Bob Broeg:

The second touchdown, a 15-yard run by Christman, made Pitchin' Paul look downright nimble as he zigzagged through a broken field. The truth is, blocking was so good on the play that every NYU player was knocked down--at least once.

Mizzou linemen teased Christman about that one throughout the following week, asking Faurot or Bengtson to rerun the film of the play in which they outdid themselves.

The 10-play touchdown drive gave Mizzou a 13-7 lead. And by this point, NYU had completely ground to a halt on offense. Boell would finish the game 4-for-12 with three interceptions (one by Christman himself). NYU managed to pin Mizzou deep a couple of times, and one time it led to the play that left observers as awestruck as any play made in the game.

With Mizzou pinned at its 7 and Christman deep in shotgun/punt formation (they were basically the same thing in those days), everybody assumed a kick was coming. It was just what you did in 1939. Take no chances, and whatever you do, don't attempt a pass out of your endzone! Well, pass was exactly what Christman did; not only that, but he completed it for 16 yards, stunning the crowd. It should be clear by now that, while the attempts and yards are not at all impressive by today's standards, nobody did what Paul Christman did in those days. He finished the game 12-for-25 for 149 yards, 1 TD, and 1 INT (the desperation heave in Q2).

Still, though, Mizzou was advancing without scoring. When the final quarter began, the Tigers were still up only 6. Even though NYU was staggered on offense, one big play could make the difference in the game. That play came when Clarence Hydron intercepted Boell and returned the pick back to the NYU 21. After the ground game worked a first down to the Violet 10, it was Christman's arm that would seal the game. Ron King would run a perfect right corner route, and Christman hit him in the hands. King, falling down, bobbled the ball briefly before securing it for the clinching points. Mizzou was up 20-7.

Smelling blood, Mizzou's defense attacked. They would set the offense up with two more scoring chances. Christman picked off a pass and led Mizzou to the NYU 9 before turning the ball over on downs. Then, they would get to the 10 before missing another field goal. After a 43-yard punt return by Dick Gale, they would even advance again to the NYU 1 with the second-string before mercifully allowing the clock to run out.

Mizzou had dominated and won easily, and the only thing that anybody could notice was that the score could have been so much worse. If not for the near misses, this could have been 44-7. They advanced into NYU's redzone countless times, while Boell and the NYU offense never again moved past the MU 47 after the opening drive. In the end, they doubled NYU up with 326 total yards to the Violet's 166.

At the end of the day, Christman had accounted for 149 passing yards, 54 rushing yards, a touchdown pass, two touchdown runs, an interception, and two booming punts. If Heisman campaigns were run then as they are now, the string of publicity stemming from this one game would have put the statue in Pitchin' Paul's hands. With the nation's attention, he had played brilliantly, and Mizzou announced to the world that they were one of the best, and hottest, football teams in the country.

Football's Dizzy Dean, the ebullient Paul Christman of Missouri, pitched a gorgeous game at the Yankee Stadium yesterday. The big blond junior neglected to take his press notices into the fray with him but he did not need them. Before the fascinated gaze of a gathering of 50,000 he passed and ran NYU into a 20-7 defeat. 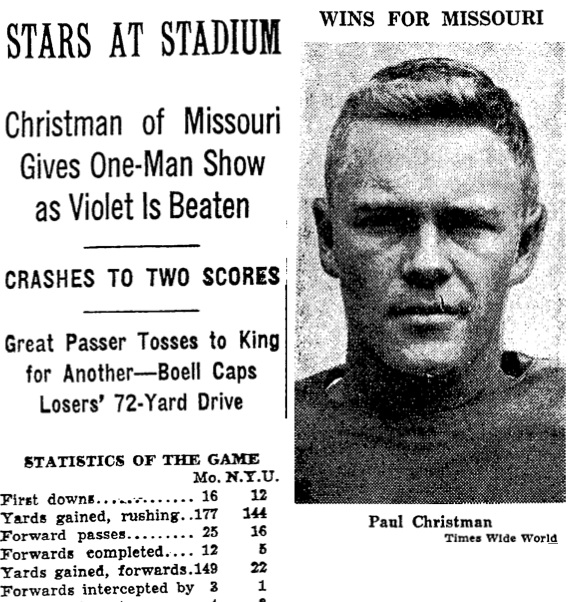