Imagine the level of dread for Mizzou fans at this point. Mizzou had gone 1-10 in 1971 and was now only 2-3 in 1972. They had just suffered their worst loss in the history of the Mizzou-Nebraska series. The backfield, clearly vital in a wishbone offense, was banged up beyond recognition--backs Ray Bybee, Chuck Link, and Bruce Berry were out. Neither quarterback--John Cherry or Tony Gillick--was providing much value or leadership. The defense was suffering lapses that few Mizzou defenses had in the last 20-25 years. The hope was quickly fading from the season. 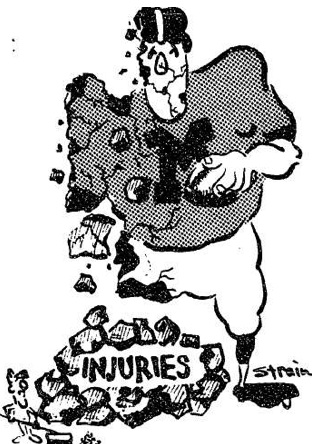 Now Mizzou had to travel to South Bend, where they were 35-point underdogs to the host Irish, a team that would go on to face Nebraska in the Orange Bowl. They had the nation's #5 offense and #2 defense, ready to shut down Mizzou's wishbone with perhaps the best defensive line in the country. They had not given up a first-half touchdown all year.

On a cold, foggy afternoon in Indiana, with a banged-up, thin lineup, all Missouri did was play their most perfect game.

Bob Pankey intercepted Notre Dame QB Tom Clements on the opening drive, and Cherry executed a perfect 12-play, 46-yard drive, capped by a 16-yard Leroy Moss touchdown run. Notre Dame responded with a 66-yard touchdown drive of their own, and after one quarter, it was 7-7.

The suddenly-potent Mizzou offense (where did this come from??) came right back. Cherry found Jim Sharp for 32 yards highlighted a drive that almost stalled at the ND 1; on fourth-and-goal from the 1, Don Johnson plunged in to give Mizzou a 14-7 lead. Again, the Irish responded, this time with an 81-yard touchdown drive. How long could the Tiger offense keep up with a more potent attack? Long enough, apparently. Capping off a first half in which they controlled the ball for over 20 minutes and rushed for over 120 yards, Cherry hit big passes to freshman Henry Marshall (18 yards) and Bill Zeigler (31 yards), and Johnson plunged in again from a yard out; the 35-point underdogs would head into halftime with a 21-14 lead.

Surely the heavy favorites would come storming out of the gates in the second half, right? One would think so, but no. Two minutes into the third quarter, the Irish muffed a Jack Bastable punt, setting Mizzou up at the ND 38. The next play, Cherry found Bastable (love the dual-threat WR-punter) for 30 yards to set up a Greg Hill field goal. A poor snap led to an ugly, low kick...but it just passed over the crossbar. 24-14 Mizzou. Notre Dame responded by...fumbling the ensuing kickoff. Mizzou's Roger Yanko recovered at the ND 20. The Tigers advanced to the 3-yard line, but on fourth down Onofrio decided he had taken enough risks on fourth down already and sent on Hill once again. This time the field goal was perfect. 27-14 Mizzou.

Notre Dame fumbled the kickoff AGAIN, but this time they recovered, and it was time for the comeback charge. Or not. John Moseley deflected a third-down pass, and the Irish had to punt. Thanks to nice running by Cherry, Mizzou once again advanced inside the Notre Dame redzone, but they dropped the dagger. They had to settle for a 25-yard field goal attempt; once again there was a bad snap, and Hill couldn't get a kick off. Mizzou's lead remained less than 14 points, but the Tiger defense continued to step up.

Mizzou had the ball when the fourth quarter began, and Tommy Reamon, who had to date had a relatively disappointing first season at Mizzou--his JUCO All-American credentials had suggested much more of an immediate impact--broke loose...almost. A 29-yard gain was almost a 78-yard touchdown, bt he was tripped up. A huge pass interference penalty, however, prolonged Mizzou's drive. Yet another Hill field goal made the score 30-14 with 10:13 left in the game.

Everybody in the stadium (and back home in Columbia) was expecting an Irish charge that hadn't come yet. Finally, however, it came. Clements scored on a 13-yard keeper to cap an 11-play, 80-yard drive. Moseley tipped away a two-point conversion attempt, however, and that was huge. The score was 30-20 Mizzou; it was still a two-possession lead.

Mizzou's following drive was quckly quashed, and Notre Dame got the ball back with 5:44 left. They drove into Mizzou territory but faced a fourth-and-18 from the MU 49. As in the tough Oklahoma State loss, Mizzou's defense caved, giving up a 36-yard completion. Two plays later, Notre Dame scored. For some reason, they went for two again (guess they weren't playing for the tie), and once again they were stopped. It was 30-24 with 4:10 remaining. The Irish had to use their remaining timeouts, but they once again got the ball back following a Bastable punt with just 2:26 remaining. They had to move 87 yards for the win, but I would say that most fans assumed they would.

They wouldn't. Clements went for wideout Darryll Dewan flying down the left sideline, but Mizzou corner Mike Fink got there in time; he picked off the pass and returned it 29 yards to ND's 29. From there, a series of Cherry keepers ran out the clock.

Words like "miracle" are probably thrown around too much, to the point that they lose some of their impact. But if you're ever going to use that word to describe a sporting event, now's a pretty good time. When Missouri played Nebraska in 1997 and almost won, they were 28-point underdogs. This Missouri team, playing this Notre Dame team, was an even bigger underdog. In a hostile road environment, in strange weather, it was the Irish who had blinked--with four turnovers to Mizzou's zero--and the Tigers who had executed perfectly when necessary. The Mizzou offensive line had played wonderfully, controlling the action against a great Notre Dame defensive front; Mizzou had rushed for 223 yards, and their four pass completions went for another 106. They had played wonderfully, and they had saved Al Onofrio's second season. They were welcomed home at the airport by 300 fans; the turnaround had begun.